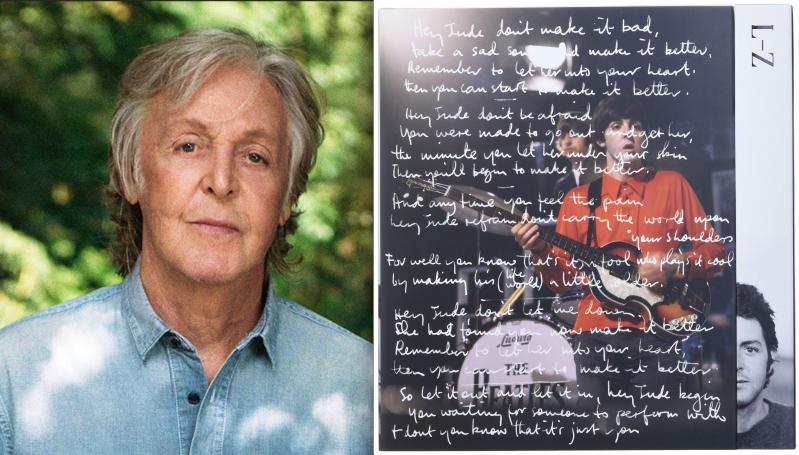 Two weeks from his 80th birthday, Paul McCartney has hardly slowed. He will wrap an American tour with a concert at MetLife Stadium in East Rutherford, N.J., two days before that milestone, and then headline the Glastonbury Festival in England one week after it, on June 25, coincidentally the 55th anniversary of the Beatles' performance of "All You Need Is Love" on "Our World," the first live, international satellite television production.

Last July, Hulu debuted the documentary mini-series "McCartney 3,2,1," in which he and the producer Rick Rubin dissect and bring greater context to the former Beatle's monumental output. In November, Peter Jackson's remarkable "The Beatles: Get Back" compelled a wholesale reappraisal of the January 1969 sessions that produced the Beatles swan song, "Let It Be." More than a half-century on, Mr. McCartney and his former band, somehow, keep on giving.

Also in November came "The Lyrics: 1956 to the Present," a two-volume collection featuring 154 songs written or co-written by Mr. McCartney, who owns a house in Amagansett. After two weeks' examination, I'm still not sure how to assess it.

Still in their early 20s, Mr. McCartney, John Lennon, George Harrison, and Ringo Starr broke free of constraints and tore up the rules of popular music, influencing the culture far beyond then-new rock 'n' roll music. Isn't that why we love them so much? Isn't that why "Yesterday" and "Here Comes the Sun" and "A Day in the Life" will be known centuries from now, in the event that civilization makes it that far?

Likewise, this assemblage of lyric sheets, personal recollections, photographs — many of them previously unseen — and handwritten lyrics, notes, and drawings is unconventional. It isn't quite autobiography, nor a book of photography, nor strictly song lyrics as poetry. Maybe it's my impulse to categorize, though I wouldn't do that with music, but "The Lyrics" leaves this superfan a bit disappointed, not to mention puzzled.

"More times than I can count, I've been asked to write an autobiography, but the time has never been right," is how Mr. McCartney opens. Okay, so this is as close as we're likely to get. And that is where "The Lyrics" is often sublime, but almost as often meandering. Of "Here, There and Everywhere," which he calls his favorite among his own catalog, he reveals Cole Porter's "Anything Goes" as an inspiration for its opening lines. "My favourite line is 'Changing my life with a wave of her hand,' " he writes. "I look at that line now and wonder where it came from. . . . Was I thinking of the queen waving from the royal carriage? Or just the power of the little thing. The power of doing hardly anything."

He is often specific in his recollections, and he writes movingly of his parents and extended family, describing boozy holiday get-togethers, aunts gathered around the piano to sing as his father, an amateur musician, banged out standards. Only later, he writes, did he learn that not every childhood is a happy one, citing Lennon's tortured upbringing.

He sometimes refers to his paintings — there are hundreds of them, by his count — and an edifying exchange with Willem de Kooning, who lived in Springs. Several of the photographs, including one of Mr. McCartney with the late Abstract Expressionist painter, were taken in East Hampton Town.

He also reveals himself to be a voracious reader, often recalling works read in school and the lifelong influence of certain teachers. Works by Shakespeare and Dickens are often referred to, as is contemporary literature and "Observer's Book of Birds," cherished in childhood and perhaps a clue to titles like "Blackbird," "Bluebird," "Two Magpies," and "Single Pigeon." But did he have to announce that "John never had anything like my interest in literature," before adding, in the same sentence, that Lennon "was very keen on Lewis Carroll" and his home housed "lots of books by Churchill"?

Like any great artist, he is a keen observer, and also moving are the recollections that informed "Penny Lane." "I drive past it to this day," he writes, "showing people the barbershop, the bank, the fire station, the church I used to sing in, and where the girl stood with the tray of poppies as I waited for the bus. That pretty nurse. I remember her vividly. It was Remembrance Day, and she had a tray full of paper poppies and badges."

But the commentary comprising much of "The Lyrics" is derived from 50 hours of conversation, over 24 sessions between 2015 and 2020, with the poet Paul Muldoon. The result is often disjointed, the lyrics and accompanying prose inharmonious. Alongside the forgettable lyrics to a track on a forgettable album from the 1980s, he muses about life as a musician, followed by a single paragraph about the song, followed by several hundred words about the Beatles' early days, and finally a few paragraphs on the greatness of Buddy Holly. No argument there, but I'm still left feeling askew.

And about those lyrics: It is unfair to characterize Lennon as the wordsmith and Mr. McCartney the tunesmith, even if it works as a generalization. The lyrics to "For No One," "Here, There and Everywhere," "The Fool on the Hill," and post-Beatles tracks like "Little Lamb Dragonfly" and "Tug of War" stand up to anyone's, and examples of his own wordplay abound. On the other hand, as I type this sentence, Lennon's "Across the Universe" plays on SiriusXM Radio's Beatles channel. Call the generalization unfair, but Lennon wins.

More important, though, what matters is the medium. Absent the brilliant melodies and harmonies, that incomparable voice, crackling electric guitars, the propulsive drums, the chemistry among the musicians, the shrieks and shouts in the Beatles' most high-spirited rockers, we are left with passages like

I want you to check
My machine

Black letters on a white background. If you're a fan, you should already know the lyrics anyway, though not necessarily to that obscure B-side. So why is it included?

In fairness, though, among the lyrics in "The Lyrics" are "Silently closing her bedroom door / Leaving the note that she hoped would say more" and "Quietly turning the backdoor key / Stepping outside she is free." "She's Leaving Home," from "Sgt. Pepper's Lonely Hearts Club Band," was inspired, he writes, by both a newspaper article about a missing girl and, probably, a television play broadcast in November 1966. "The detail of leaving a note that she 'hoped would say more' is one of the strongest moments in the song," he writes. "Like many writers, I'm fascinated by what's missing in a piece."

"The Lyrics" is interesting enough — how's that for faint praise — but a straight-up autobiography with photographs might have been a more worthwhile offering. The commentary accompanying "Say Say Say," an early-1980s duet with Michael Jackson, exemplifies the book. His description of the single session that birthed it is, yes, interesting enough, but there is also this very sound advice: "For me, writing a song is just following a trail and then diverging from it and beating a new path. I set down a map of sorts, some rough coordinates, and then go there and find stuff on the way, just picking up little objects that happen to be lyrics or melodies."

The finished product, he says, is "not just something that takes up space in the world. With any luck, it helps define the world."