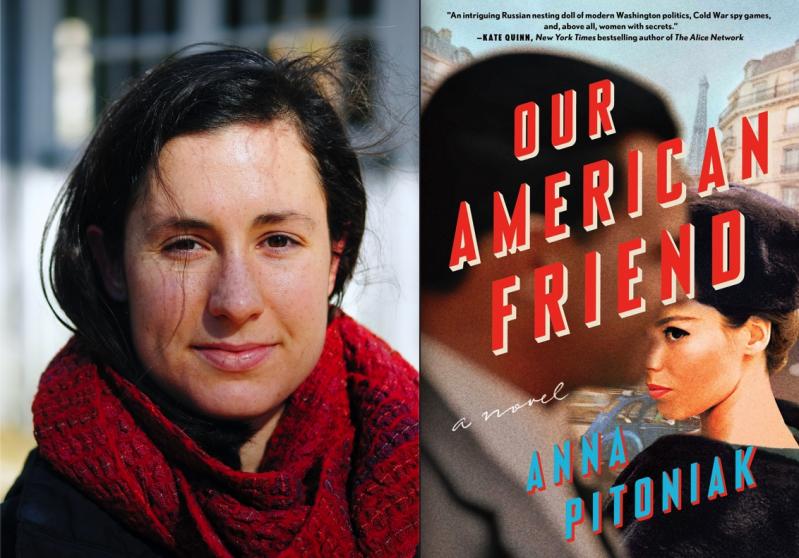 "Our American Friend," the third novel by Anna Pitoniak, opens with Sofie Morse, narrator and protagonist, and her husband, Ben, living in Split, Croatia. They are not on vacation, but are living there for reasons as yet unspecified, although later Sofie calls it "exile."

"The truth was that Croatia didn't have a history of extraditing American citizens. If our government wanted to bring us home, they'd have a hard time doing it from here."

Sofie begins her story wondering if she has "made the worst mistake of my life." An American TV journalist has just tracked her down outside her home and wants to know the truth, "which, if revealed, could cause the entire operation to collapse. It wasn't just my safety or Ben's safety . . . the stakes were much bigger than that." Sofie's response is to immediately hang a red towel off the railing of her balcony. Clearly a piece of Cold War spy craft, with which the book is replete.

Russian President Nikolai Gruzdev is building the Nord Stream 2, Russia's natural gas pipeline, and his "American friend," President Henry Caine, is not going to stand in his way. "For a long time now, the world had suspected that there was an understanding between the American president and the Russian president. . . . The Russians used disinformation and propaganda to help Caine win his first election." Hmm, sounding familiar?

Caine's third wife is Lara Orlova, "the only First Lady since Louisa Adams to be born outside the United States . . . the silent companion of the most toxic leader in American history, the couture-clad Rorschach test for the nation at large — and the subject of my next book." Caine is clearly a thinly disguised Trump, whom the Russians have helped win his election. Worse yet, in this counterfactual reality, President Caine has "horrifyingly" been re-elected to a second term.

Sofie has been asked by FLOTUS to write her biography. Lara is Melania-like in that she is Slavic and a gorgeous ex-model. Larissa Fyodorovna Orlova was born in Moscow in 1970. Melania was born in Slovenia, also in 1970. When Lara was a young teen, her family moved to Paris, where her father was a military attaché at the Soviet Embassy. Sofie believes (correctly) that attaché is "one of those jobs that only exists as a cover for another kind of job." Spy for the K.G.B.

And Lara doesn't deny that, but she wants to commence telling her story somewhere completely different: with Alexander (Sasha) Kurlansky, "the great love of my life." Sofie, doing her due diligence, discovers that the 20-year-old was found dead of an "apparent" suicide in Paris. In actuality he was murdered by the K.G.B.

As Lara begins telling Sofie about her life and her first love, the relationship between them becomes fraught for Sofie. She is rapidly seduced and enormously taken by Lara's intelligence, forthrightness, elegance, and warmth. Lara treats her like one of the family, inviting her to stay for lunches, to meet her mother, Irina, and her daughters, and generally to participate in Lara's daily life.

But Sofie is mindful that a biographer must maintain a certain emotional distance and perspective from her subject, and she is determined that she will be completely honest, even if that is not flattering to the first lady. Lara assures her that she will not ask for approval or authorization over what Sofie writes, but Sofie worries that this might not actually be the case. "I was getting closer and closer to Lara Caine. But how close was too close?"

Her struggle with this intimacy and objectivity seemed somewhat artificial to me. Why could she not be friendly with Lara and yet still do honest work as a journalist?

"Our American Friend" is told in alternating sections of Sofie's first-person perspective in present-day New York and Washington, D.C., and then a third-person omniscient narrator privy to the thoughts of a young Lara as well as her parents or others being told about.

The young Lara is living in Moscow and then in Paris in the 1980s with her father, mother, and sister. Without too much spoiler detail, teenage Parisian Lara becomes a spy for the C.I.A., photographing the documents her K.G.B. father brings home each night using a camera hidden in a cigarette lighter, and then leaving the information off at a dead drop to be retrieved by her handler. Her motivation is somehow to take up the reins from Sasha, her dead lover, but I must admit that I found that her willingness to betray her father, her natal country, and her entire family had come too easily and was somewhat unconvincing.

There is an ominous quality to the arc of the novel. Both in Sofie's present first person, and in the sections dealing with Lara the teenage spy, there is a kind of nebulous dread. One has the feeling in much of the book that something awful is about to happen. And much bad does happen. People are killed, and there is a great deal of treachery in this, I suppose you could call it, feminist political spy thriller. Betrayal, mistrust, and duplicity are integral to the story. No one is to be trusted, and nothing and no one are as they seem.

Interestingly enough, one often interprets the unfaithfulness as going one direction, when in fact it later turns out to have gone the other way, or often even both ways.

I found Ms. Pitoniak's intentions a bit opaque and puzzling. Sofie is anxious about and suspicious of Lara and her intentions toward her own biography, and I was not exactly clear why. Also, I found it highly perplexing that while the title phrase "our American friend" seemed to apply to President Caine, it was also applied to other people in the novel. Was this intentional? And if so, why?

Ultimately, I found "Our American Friend" insufficiently thrilling, and not quite emotionally visceral. There is an almost clinical distance between the characters and the effects of their actions. Nevertheless, Ms. Pitoniak's writing is clean and spare, and she occasionally tosses off a wonderful line. "This is what love does: it makes everything matter." "Glasnost was thawing the frozen tundra of repression."

And then, with Lara grieving at Sasha's grave, "Sasha's body had passed from one custodian to the next: the police, the medics, the coroner, the undertaker. Now it was just her, and when she left, he would be entirely alone. Sasha — just a week ago, talking and laughing, holding her hand, brushing the hair from her eyes — now abandoned to the earth. She imagined the terror of it, of Sasha realizing that he was now completely alone."

I am certain this book will find its fans.

Michael Z. Jody, a book reviewer for The Star for many years, is a psychoanalyst and couples counselor in East Hampton.

Anna Pitoniak has a house in East Hampton.

Free Car Seat Checks in Southampton
Battle of the Books, and More Fun for Teens
This Week's Happenings in Montauk
END_OF_DOCUMENT_TOKEN_TO_BE_REPLACED