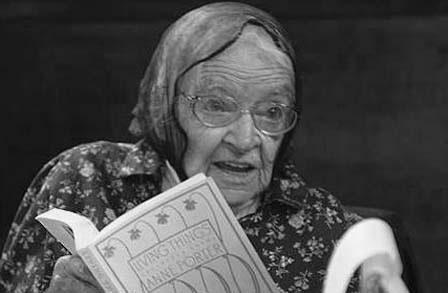 When you're talking about eminent personages, Southampton has had more than its share. So how about celebrating a pre-eminent one? Anne Porter, that is, who died in 2011, will have a selection of her poems read by friends and fans at the Southampton Arts Center on Sunday. Family members will provide anecdotes from her life.

In a way Porter's story reflects that of a great novelist from across the pond, Penelope Fitzgerald, in that they both started writing late in life, after their husbands died, and went on to significant acclaim -- in Porter's case as a National Book Award finalist for "An Altogether Different Language," a 1994 collection of her plainspoken poems. Her husband, the painter Fairfield Porter, died in 1975.

The reading, with Paton Miller, a Southampton artist, among those taking part, starts at 2 p.m. The cost is $10, free for members, and there will be refreshments afterward.

A Memoir Not “Shy” at All

"The funniest book The East Hampton Star ever sent me to review" is how David M. Alpern of Sag Harbor, former senior editor at Newsweek, described "Shy," the memoir of the late Mary Rodgers, once of Quogue, as he introduced the book's co-author, Jesse Green of The New York Times, at a recent Dutch Treat Club talk in Manhattan.

Their discussion of the ribald and star-laden life story of the daughter of the Broadway legend Richard Rodgers will be reprised over Zoom on Nov. 10 at 5:30 p.m. through the Hampton Library in Bridgehampton. Registration is at myhamptonlibrary.org.