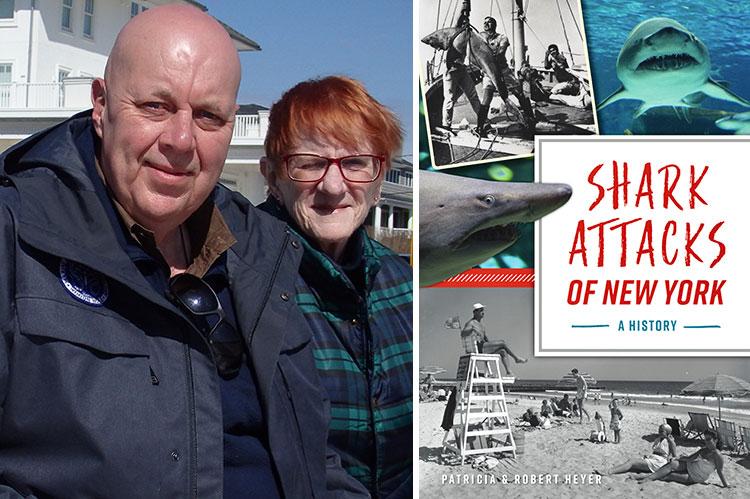 Readers should enjoy Patricia and Robert Heyer's new historical book, "Shark Attacks of New York." It's augmented with fine illustrations, it's pithy, and, of course, going by the title, it's entertaining.

The book is a delightful anachronism, if you will, taking you back in time and place. Here's one example I quickly found, but there are many, and all are helpful: "There is one thing you can say about 1888: It was a momentous year. The country was burgeoning into an industrial power and at the same time remodeling itself with the construction of new roads, bridges, tunnels, and railways," and the Washington Monument opened to the public. "Overseas, work was just beginning on the Panama Canal."

This book offers a nice brush-up on world and local history. In this regard, it's not unlike another History Press volume, Bill Bleyer's recent "Long Island and the Sea: A Maritime History," which I had just finished and loved — both are written by professional historians who know their subjects well.

More so than Mr. Bleyer's book, "Shark Attacks of New York" is a short read, a mere 95 pages with pictures, so you won't have to wait till February for your next book club to come out of its hibernation — you could buy it today, finish it tomorrow, and when your kids snidely ask you, "What was the last book you finished?" you can blast them with "Shark Attacks of New York."

There are sections on Montauk, Sag Harbor, and elsewhere on the East End, but the fundamental problem is that the title promises too much. Sadly, when it comes to actual shark attacks, the stories are anticlimactic and largely anecdotal, usually ending with someone smacking the aggressive fish with a nearby oar or a convenient rock, or in one case a rake, till the beast recedes back into the depths.

The book reads, as it must, as folklore; that's how news was covered in the past. For example, the first story is about a drunken Dutch bugle boy who tries to cross a dangerous, riptide-laden river to warn of the imperial British arrival, and just before he drowns in the middle of the turbulent waters, he lets off one more dramatic blast of his trumpet. I mean, yes, it could have been a shark attack, but please.

I read this book twice, and unless I'm missing something, there were no genuinely horrific shark attacks off New York in its history.

When I see the title "Shark Attacks of New York," I expect some real meat and potatoes. I want to read of a woman bathing her newborn by a quiet sea as it is mercilessly snatched from her arms and eaten by a stealthy great white waiting quietly submerged in just three feet of water. And I want pictures and lots of witnesses.

Or I want to read about a fat guy who fell off his Jet Ski while plowing through a piping plover sanctuary and was conspicuously dragged to his death by a shark in front of a thousand witnesses, leaving only a pool of blood.

But you don't find that here. Only one person dies, and that was more from shock than the actual wound, which, agreed, was substantial. Most of the attacks seem to end in benign injury: a missing finger, a slight scar, an unspecific abrasion.

I don't blame the writers, but perhaps they chose the wrong state? I mean, two years ago off the beach at Cape Cod, Mass., a young man was tragically killed by a great white while boogie boarding. This is what concerns lifeguards today, especially in local waters. Because global warming is forcing more foreign predators up the coast, including bull sharks, brown sharks, and tiger sharks, all known to be aggressive toward humans, even if by accident.

Lifeguards and bystanders and drone footage have documented large sharks herding and then violently attacking terrified thrashing baitfish (usually vast pods of bunker in close proximity to swimmers). I am a recreational fisherman, well acquainted with the fisheries of this area, and to be honest I am surprised there has not been an incident this year. It will inevitably happen, as humans en masse occupy areas where apex predators live or feed. The good news is that sharks in general prefer to feed offshore, so an attack would be rare.

I digress. This book is surprising and charming and factual. There is a useful appendix that cites references from newspapers dating back centuries. Although the authors admit that the press at the time (often The New York Times) was frequently dismissive, or coy, not giving the stories full respect or adequate coverage.

The value of this little book is in what was going on in the world or in neighborhoods when the shark incidents occurred, not so much in the incidents themselves.

Jeff Nichols is the author of "And Then They All Puked: Why I Should Never Have Been a Montauk Groupon Charter Boat Captain." He lives in Springs.