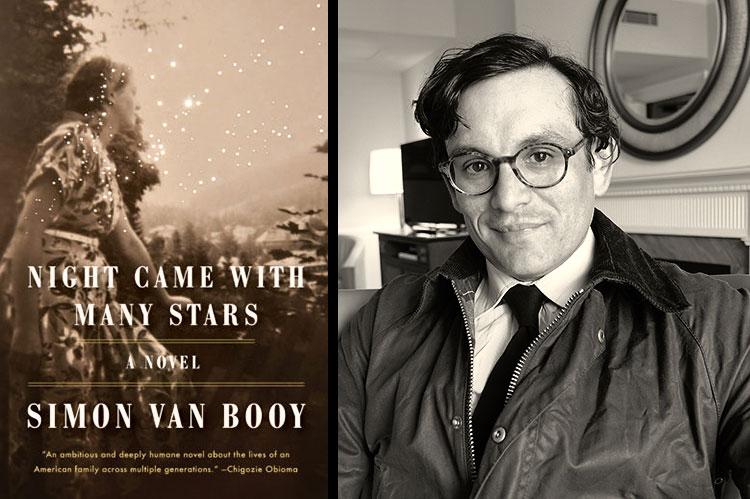 Simon Van Booy prefaces his new novel with an author's note stating in part that the book would not exist without the love and "family stories entrusted to me over three decades by the members of one family from rural Kentucky."

In doing so, Mr. Van Booy not only acknowledges his debt but he also establishes his bona fides despite coming to his time in Kentucky by way of Wales and the Oxford countryside. He then proceeds to repay that family's love and trust in full by transforming their stories into his affecting and beautifully realized "Night Came With Many Stars."

The work is a multigenerational family story revolving around two central characters, Carol and her grandson Samuel. The narrative weaves back and forth between them and a small number of other relatives and characters through 31 vignettes ranging in time from 1924 to 2010 and revealing the interrelationships and connections that exist over space, time, and family.

By keeping his cast of characters comparatively few for a novel taking place over three generations, Mr. Van Booy is able to focus his story and provide a more intimate portrait, while also lessening any narrative confusion that might occur for the reader with the shifting characters and years. It is a testament to his strength as a writer that he is able to weave these separate episodes into a coherent and fluid whole around the warp and weft of Carol and Samuel while providing small connective threads that eventually reveal the whole as the story progresses.

The novel begins in 1933 as a 13-year-old Carol learns that her abusive drunkard father has bet her in a game of poker and lost to Travis Curt. When Curt collects Carol to spend the weekends at his farm, she is soon raped and impregnated. Contemplating suicide but fearing that her unborn child will somehow survive and be raised by her father, she decides to run away instead.

Thereby begins a series of small chances and simple kindnesses that are nonetheless impactful on her life. But for years Carol remains fearful of her past, afraid her father will reclaim her and the son she gave birth to. She believes "the sins of past generations [are] just waiting for a door to reenter [our] lives and take over the present."

That present is represented to a great extent by Samuel. His story begins in 1986, when he, also, is 13. Like Carol, Samuel suffers a traumatic event. While fooling around in shop class at school, he is accidently blinded in one eye when his best friend, Eddie, flips a nail at him. His vision is eventually restored, but his eye always looks off-center.

Samuel has a difficult time after high school. He withdraws from college after one semester and generally feels lost and without purpose, simply stating, "There is nothing here I want." He turns to alcohol and to a lesser extent drugs, but he is saved from having his life spiral away from him by the love and support of this parents. While he accepts the job his father arranges for him at the Ford automobile plant, he knows there is something more that he needs and wants from his life.

Carol and Samuel share touchstones and similarities in their lives as they both struggle to find their places in the world and reconcile themselves to who they have been and what they eventually become. By choice and by chance, through individual perseverance and resilience, by the kindnesses and loyalty of friends and strangers, they prevail. Their attained self-awareness and self-assurance are not only made possible by their own courage and resolve but equally importantly by the enduring bonds of family and friendship.

Fittingly, it is through her grandson that Carol finally experiences some reconciliation with her own childhood and family, telling him that "whatever badness was here, you've crushed it out of existence."

Early in the story, Carol wonders "if everything in this world wasn't just a rehearsal for some other more perfect place, where there was no cruelty or suffering, but no kindness or salvation either." Here is one of the salient points of the book, that despite all the evil and cruelty, all the pain and injustice, a goodness prevails through the shared human experience: "the thing that makes family, not blood, but the certainty that you're never gonna be lonesome -- that all the joy and all the sufferin' we get in life is somethin' that will always be shared."

Mr. Van Booy is not afraid of sentiment. Given this material, a lesser writer might have mired himself in mawkishness on any number of occasions. But he maintains a deft touch and a firm handle on his characters throughout the book. There are no contrivances; the strength of the characters permits the emotions to develop as authentic and true. In so doing he creates a compassionate and evolving portrayal of a group of people and their place and time.

Mr. Van Booy is a writer of grace and empathy. Despite his passionate depiction of society's inherent evils and injustices, he has in the end given us a work of great warmth, generosity, and optimism.

Simon Van Booy's previous books include "Father's Day" and "The Sadness of Beautiful Things." He has lived on the South Fork and remains a regular visitor.