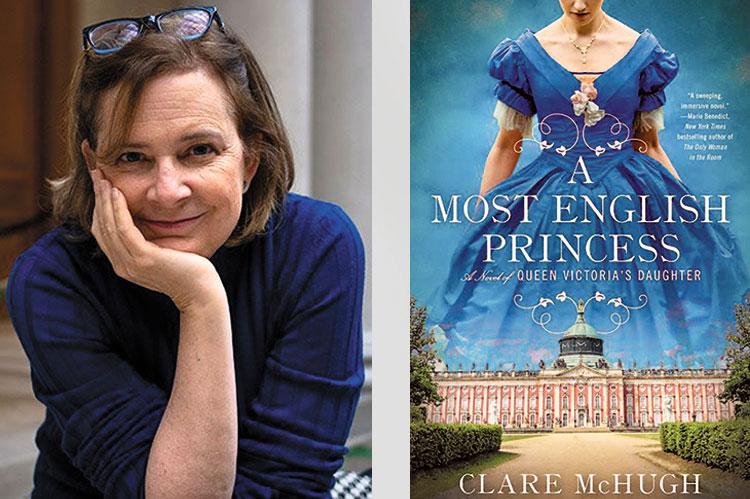 After multiple seasons of "The Crown" and "The Tudors," along with varied treatments of queens such as Victoria, Anne, and Elizabeth I, you might imagine we are beginning to run low on British royalty, tapped out on deeds that incite public curiosity. Then along comes Vicky — to you, the Princess Royal, the eldest daughter of Queen Victoria of England — and her beloved German consort, Prince Albert. If you have never heard of her, you are not alone.

In her gripping first novel, "A Most English Princess," Clare McHugh has seized on the fact that Vicky, the fleeting empress of Germany and the mother of Kaiser Wilhelm II, was surely the smartest and most capable of her siblings. Her claim to England's throne was dashed by her younger brother Bertie, the future King Edward VII.

The fictional 6-year-old Vicky is astonished to learn that Bertie, a middling and inattentive student, will be king and that being a girl is a disadvantage. "You don't want me as Mama's heir," Vicky cries, balling her little fists to beat her father's chest in disbelief.

"Your question is not reasonable," says Albert, soothing his favorite child, promising, "the world is very big, and I will find the right place for you. Your excellent mind and your determination — these cannot be wasted."

Whether Vicky was ultimately wasted on Crown Prince Friedrich of Prussia (later German Emperor Frederick III and King of Prussia) is open to debate. At 11 years old, Vicky was introduced to the 19-year-old "Fritz," the dynastic machinations of her ambitious parents quite evident. By the age of 15, Vicky was engaged to Fritz, then second in line to the Prussian throne, with whom she dutifully fell in love.

Ms. McHugh imagines a steamy sex life for the couple. No lying in bed and "thinking of England" for the Princess Royal, who enthusiastically produces eight children in rapid succession. In Ms. McHugh's reckoning, Vicky is the brains and spine of the union. She pushes Fritz to speak his mind and to seize opportunities that he is either too dim or too gentle to recognize. In Vicky, we have a mid-to-late-19th-century heroine whose advocacy for democracy and social justice is reminiscent of the struggles we have today.

In a dramatic prologue to the novel, a dying Vicky uses a visit from her godson, Fritz Ponsonby, as a means of secreting her correspondence out of Germany and away from the clutches of her volatile son, Wilhelm II, the last German emperor, whose conservative views are distinctly at odds with her own. In a historian's bonanza, the letters between Vicky and Fritz have been preserved, as have the letters of Wilhelm in, as Ms. McHugh puts it, all his "grandiosity and his warmheartedness, his wit and his racism." But it is the five volumes of letters between Vicky and her mother, Queen Victoria — almost 8,000 letters collectively — that provided Ms. McHugh's chief source material.

Impressively, the author sticks to the facts, resisting the temptation to glamorize her diminutive heroine (at 4 feet 11 inches tall) or her idolized parents. Indeed, in making the match, Queen Victoria is ever the critical mom, who worries that Fritz will be repelled by Vicky's "waddle" when she walks. Through pedantic letters that prod his daughter to exert her influence on the public sphere, Prince Albert seeks to move Prussia and the loose confederation of German territories toward unification — a drumbeat that must have grown tiresome. As was true in life, poor Princess Royal is caught between a proverbial rock and a hard place, neither Prussian enough for her adopted country nor English enough for the home that she reluctantly left behind.

Thus Vicky's personal life was largely political. Her story offers a window onto the unification of the German states in 1871, led by Prussia, along with its complicated wars and relationships with surrounding countries such as Denmark, Austria, France, Russia, and Italy. Indeed, in "A Most English Princess," history unfurls as an extension of domestic life. Vicky and Fritz could be the couple living next door who navigate a lucrative family business in which successive generations struggle to find profit and relevance.

The novel provides a strong sense of this history's key players, who are as specific and familiar as my cantankerous uncle Leo at annual gatherings. Vicky's in-laws — Wilhelm I and his icy wife, Augusta — turn Vicky's life into a daily minefield. As parents, Victoria and Albert rarely question their God-given superiority, pushing the Princess Royal into unpopular moves.

But perhaps the most arresting character of all is Baron Otto von Bismarck, ultimately German chancellor. Bismarck pulls all the strings through a canny combination of charm, strategy, and disingenuousness. Vicky delights in constantly challenging Bismarck, who in turn encourages public sentiment against her.

Though history books have not always been as kind, the Princess Royal has Ms. McHugh's sympathy. In the author's eyes Vicky's aim is always noble, the urge "to be good and do good" her main objective, even as she regularly stumbles from a clumsy lack of diplomatic skills. Foremost, she was a devoted wife and mother. However, she anguished over her son Wilhelm's withered left arm, an accident occurring from a difficult birth. The maternal lapse was believed to be the genesis of the rift between mother and son that grew into lifelong enmity.

Vicky was neither pretty nor charismatic, in the way of many heroines. Nonetheless, her keen intellect and conscience drove her to carve out a place in a world that would have preferred her silence — a feat in light of all that worked against her.

She was the last person to be passed over for the crown because of her sex. Soon after the wedding of Kate Middleton and Prince William in 2011, a law was passed that did away with the order of succession that favored males over females, dubbed by Ms. McHugh "Vicky's Law."

Ellen T. White, former managing editor at the New York Public Library, is the author of "Simply Irresistible," a book about great romantic women in history. She lives in Springs.

Clare McHugh has been a newspaper reporter, magazine editor, and book reviewer for The Wall Street Journal and The Baltimore Sun. She lives in Washington, D.C., and Amagansett.

A Conference for Young People to Create Solutions
Get Outside, Get Moving
Two Traditions, One Fair in Springs
END_OF_DOCUMENT_TOKEN_TO_BE_REPLACED