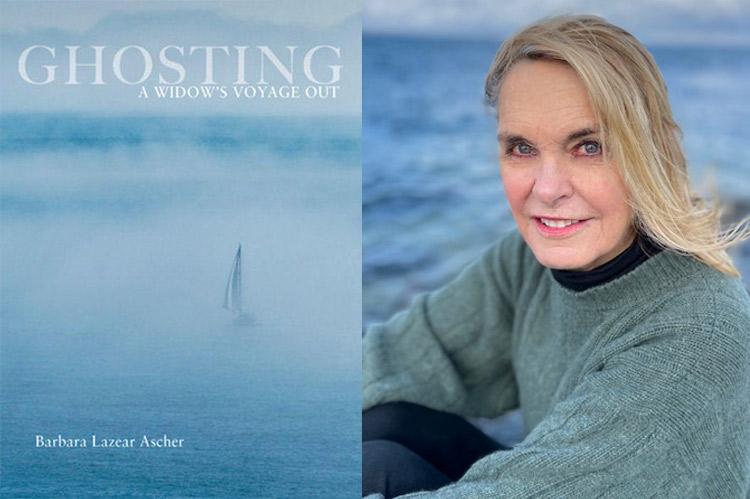 Ms. Ascher and her husband, Bob, had just spent a summer sailing New England waters, and as Labor Day approached, Bob raised a glass to announce: "This has been the best summer of my life." But on the trip back to Manhattan, he felt unwell. Blaming it on a chicken sandwich they'd shared, he uncharacteristically asked her to drive. After more than three decades of marriage.

"It was a love against all odds," Ms. Ascher writes about the beginning of her relationship with Bob, the man who would become her husband. He was a psychiatrist from New York. She was a 21-year-old college student. He was in his 40s, married with three children. Her parents did not approve.

She and Bob had a child, Rebecca, while making sure to be attentive to his three other children.

But in autumn after that perfect sailing summer? Ms. Ascher had to cajole her wise psychiatrist/physician husband into discovering what was causing his pain. The day after he grumpily underwent a CAT scan, she returned to the medical office with flowers for the long-suffering nurse. " 'I think he'll be fine,' " Ms. Ascher quotes the nurse. "But, there was something in her eye, a brief flicker. She'd seen something on the scan. I replied, 'He has to be, he's a lovely man.' "

The diagnosis was the remarkably stealthy, remarkably vicious pancreatic cancer.

"I wept for the first time in a long time," Ms. Ascher writes. "At an early age, we Lazears had been trained out of tears. 'Lazears don't cry.' 'Be a stoic.' 'Be plucky.' And we didn't and we were."

One of the great strengths of this memoir is this very evenhandedness. Ms. Ascher is careful to point out that this man who squeezed orange juice for her every morning was not always temperate. Yet she provides us with ways in which we see what an extraordinary psychiatrist her husband was. Freudian-trained, he was a humanist. He sometimes made decisions that weren't economically beneficial, even continuing with patients who could no longer pay. Or limiting his practice in unusual ways:

"The middle-aged, the old and those who appeared to be on the cusp of thirty crossed our threshold. When he reached sixty-five, he'd stopped accepting adolescent patients, an age group for which he had an affinity. 'Because they deserve someone who can hang in until they grow up.' "

Yet during the last weeks of his life he saw other patients in his home — a Freudian no-no.

"My focus was as intense and singular as a welder with a torch." The metaphor is startlingly apt as she protects him from all manner of harm. " 'Off with the loafers, the tweed sports jacket, blue and white striped shirt, flannel trousers and plaid boxers,' " she coaches her husband. " 'Leave your socks on. Your feet will get cold,' I suggested as I tied the back of the standard issue hospital gown. . . . 'Patients should be able to choose their gowns,' I muttered. There are so many ways to make hospitals more humane. To remind 'caregivers' (hated expression) that they care for humans."

Ms. Ascher had to figure out ways around every stumbling block. In the "Seducing the Nurses" section, she writes about how to undermine the undermining of minimal health-care worker eye contact. She compliments, offers flowers, even bakes brownies. "We family members of patients recognized one another by our pleas for attention, our lost awareness of day and night and by our weariness."

And then one day she snapped. Three doctors stood outside her husband's hospital room door laughing. Loud. "On the fourth day," she writes, "something cracked. I went from seductress to lioness." She angrily chastised the doctors for their disregard — her husband had just undergone a painful life-altering surgery.

"I'm sorry," the doctor said when she berated him. When she found out one of the doctors was head of a department, she wasn't chastened. " 'Good' . . . I don't care. My job was to protect my injured one. Unless you had his best interests in mind, you weren't welcome."

When her husband returned from the hospital she noted "ecstasy" in their relationship despite her incredibly competent husband's feelings of powerlessness. At one point he said, "This has been a time of great joy as well as suffering."

"Having a gun pointed at our heads inspired us to become our best, most open hearted, honest and bravest selves. Alternate states like this don't occur as acts of volition. They are there when we've been stripped of incidentals. There were many times when we felt blessed. It was as though certain death had granted us an extra life."

As she analyzes the drama surrounding her husband's illness, Ms. Ascher handles past sleights and arguments deftly. Her approach is far wiser. She is not advocating forgive and forget, but rather analyze and forgive. Because by understanding past behavior one is better prepared for what may come. At Bob's funeral, she asked that his first wife come forward and sit with the rest of the family.

At one point in this volume, Ms. Ascher's description of grief is a catalog of fears culminating in "rage" that becomes a "shield against the terror." She understands that she was not always sane after Bob's death. Despite the fact that she trained in the law, has written several nonfiction books, has been a columnist for The New York Times and Elle, has been a contributor to NPR, and has taught writing at Bennington.

In an earlier memoir, "Landscape Without Gravity," she told so many emotional truths about her brother who died of AIDS. She approaches this volume, "Ghosting," with the same courage and insight. In this tender, evocative memoir she doesn't dwell on mourning. Bob had always told his wife that love begets more love.

Which is why when an elegant gentleman and Ms. Ascher begin to date, the reader is entranced. And rather puzzled when Barbara Lazear Ascher holds back.

Yet when she is finally able to accept the love of a man who has lost his own wife, after they figure out how to care for their respective families and bring them together, she said: " 'Don't take your wedding ring off,' I urged when I agreed to marriage. 'Add mine to it.' "