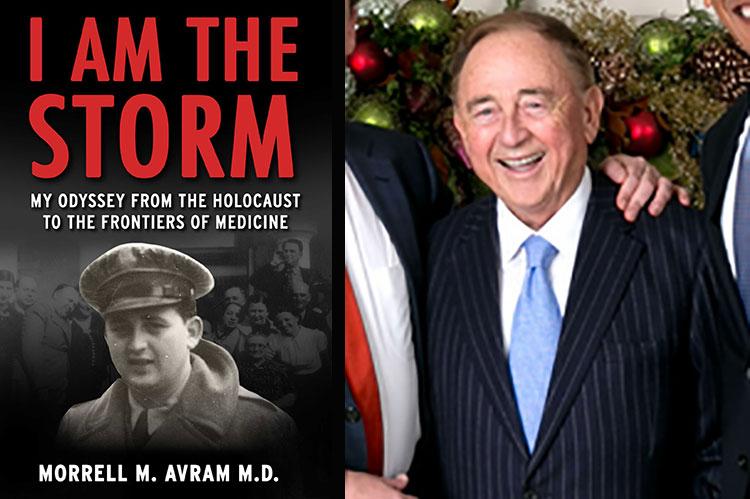 To read the memoir of someone you've never heard of can feel like beginning a conversation with a stranger at a party — at worst, a stab in the dark that goes nowhere, and at best, the genesis of an unexpected friendship. Before reaching the end of Morrell Michael Avram's recently published "I Am the Storm," I had begun to regret that we were not likely to be invited to the same gathering.

The subtitle of this highly readable book is "My Odyssey From the Holocaust to the Frontiers of Medicine." Although the story told here begins in Bucharest in 1940, after Romania had signed an alliance with Germany and the other Axis powers, it would be a mistake to think of this as a Holocaust memoir. It is, rather, a prominent American physician's synthesis of some 80 years of his life, the early portion of which is told against the background of harrowing wartime circumstances in an Eastern European capital.

Dr. Avram was born into a middle-class Jewish family in Bucharest in 1929. When he was 11, his American-born mother was allowed to return to the U.S. with his younger sister. ("Our idyllic life in Bucharest was over.") That left him and his father to fend for themselves, sometimes together and sometimes separated, for six years, hiding in plain sight to avoid capture and almost certain death at the hands of the dreaded Iron Guard.

Romania was one of those countries where a long history of deep anti-Semitism ensured the Nazis plenty of willing collaborators when it came to disposing of the Jews. "Romania was the only country under Hitler's control that told the Nazis not to bother rounding up their Jews, because they would do the job themselves."

Although both Avrams managed somehow to elude the enemy, the author came perilously close to boarding "the Struma, a ship that was taking nearly 800 Jewish refugees from Romania to Palestine, until it was torpedoed and sank after seventy days of horror at sea." Several of his closest boyhood friends were among those lost, causing Dr. Avram to suffer periodic nightmares from then on.

In 1946, the author was finally able to join his mother and sister in New York. "I was a skinny sixteen year old with no idea what the future held. But I knew what I was leaving behind. . . . So many friends and family had been murdered. So many Jews had been massacred. Was it still possible to believe in a world of goodness and kindness?"

He completed high school on the Upper West Side of Manhattan, following which he entered Long Island University in Brooklyn. College was interrupted by a stint in the U.S. Army. Dr. Avram reports that, unlike most draftees, he was eager to serve, sensing that the military would instill some purpose in his life.

If the title he chose for his book is any clue, then it appears Dr. Avram got what he wanted. "You are the storm! You are invincible!" was the oft-repeated mantra of his drill sergeant at Fort Sam Houston in Texas. From those words, the shy, newly minted American acquired focus, perseverance, and confidence. Those would become the hallmarks of his life and career from that time forward.

The most unique aspects of Dr. Avram's story, and arguably the most interesting, are found in the depiction of his adult years. Essentially, this is the history of his career as a physician. Beginning with medical school in Switzerland, followed by residency in Brooklyn, starting and growing a nephrology practice, playing a committed role in the early use of an artificial kidney for dialysis, and in kidney transplantation, earning a reputation as a skilled and compassionate healer, Dr. Avram functioned in multiple arenas. Even as he participated in international studies and conferences in his field, however, he never abandoned a profound commitment to care for the underserved.

One of the most compelling chapters describes how he reluctantly succumbed to the supplications of two nurses on his hospital's staff, agreeing to attempt dialysis on their diabetic husbands, whose illness had become life-threatening. Up to that time, kidney dialysis was considered entirely unsustainable in diabetic patients. ("We've got to keep pushing, keep experimenting with the artificial kidney. We need to find out what can be done with it and what can't.")

Similarly, his order to remove both kidneys from a woman suffering from near-fatal high blood pressure — a staggeringly audacious move at the time — reflected not only his dedication to healing his patients, but also his brilliance as a practitioner.

Dr. Avram's perspective on the Covid-19 pandemic, toward the end of the book, illustrates the medical tenets that are the underpinnings of his practice. ("COVID-19 is racing alongside a much slower pandemic, one that has been with us for a very long time, effectively, malnutrition. Our poorer citizens are dying from poor metabolic health.")

This is a medical doctor who continued to make house calls after many others had stopped doing so. He turned down the offer of a posh suburban practice in Connecticut, choosing instead to continue caring for the patients who needed him in Brooklyn.

The account of a distinguished medical career is enhanced with descriptions of a summer job at a Poconos resort, where Dr. Avram met several entertainers who would go on to achieve stardom, as well as a stint as the doctor "on call" in the Broadway theater district, dealing with medical issues onstage and in the audience, which came about when the young doctor needed to augment his income to provide for his growing family.

Dr. Avram is in fact anchored by love of family, both his family of origin and the family he raised with his beloved wife. He writes of them with deep feeling. A chapter close to the end of this book titled "What I've Been Holding Back" is as affecting as it is surprising.

It is not difficult to discern the impact of Dr. Avram's early life on his later accomplishments. Suffering may not ennoble, but it can engender courage. And following the arc of a courageous life makes for a most gratifying reading experience.

Jim Lader, who owned a weekend home in East Hampton for many years, has been reviewing books for The Star since 2009.