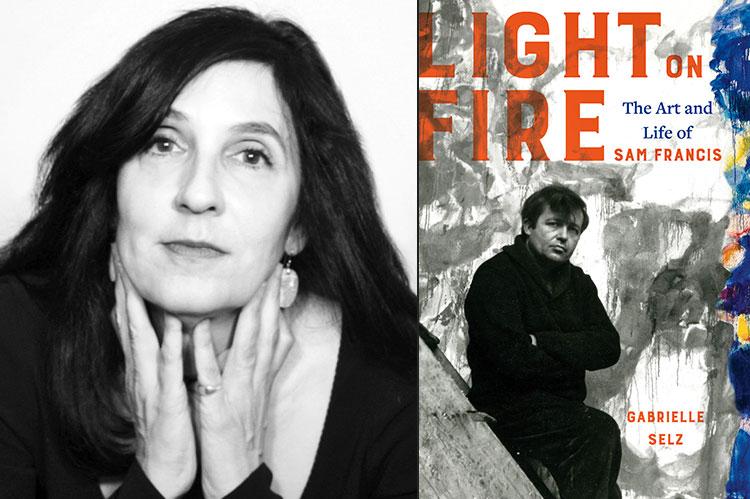 In the engaging new biography "Light on Fire: The Art and Life of Sam Francis," Gabrielle Selz traces the triumphs and tragedies of the California-born artist, whose luminous paintings, prints, and works on paper placed him firmly in the pantheon of 20th-century icons of modern art.

Sam Francis (1923-1994) was internationally acclaimed for his intuitive grasp of color and space as well as the visual synthesis he attained from Abstract Expressionism, modernist French painting, Zen Buddhism, and Jungian analysis. This, in combination with boundless curiosity and an indefatigable nature, led to Francis's meteoric ascent within the world of art. A restless man possessed of a big mind, he overcame titanic obstacles in his life, becoming an international phenomenon by his early 30s. In 1956, Time magazine hailed him as "the hottest American painter in Paris these days."

In this impeccably researched text, Ms. Selz delves into the complexities of a life that prevailed across three continents, with studios in France, Tokyo, New York, California, and Bern, Switzerland.

Ms. Selz is a deft writer whose 2014 memoir, "Unstill Life," tells the intoxicating story of her art world parents, their celebrated friends, and the bumps along the way. Her father, the renowned scholar, professor, and curator Peter Selz, was close friends with Sam Francis, as well as a staunch advocate of his work. For Ms. Selz, the charismatic Francis existed somewhere between family friend and larger-than-life figure. In this regard, her writing achieves a depth of feeling, marked sympathy, and a grasp of the man as well as the myth, with an insider's knowledge of his gigantic, imperfect life. Elegant and precise, her writing paints a captivating portrait of this complex artist.

The story of Sam Francis is framed by early tragedy. The death of his mother when he was just 12 years old would create an unfillable void in his life. The following year, he accidentally shot and killed his best friend with a .25-caliber pistol. A summer road trip across the plains to his father's birth home in Newfoundland would offer the family a brief reprieve as they caught glimpses of the northern lights and shared a fleeting sense of calm.

Within a few years, World War II would impact the United States, and at 20 Francis left college and his pre-med studies to enlist in the Army Air Corps. He dreamed of becoming a reconnaissance pilot but became ill with spinal tuberculosis in the midst of training, ending up in a veterans hospital. Misdiagnosed for many months, by the end of the year Francis was completely immobilized in a full body cast. For three years he hovered between life and death.

Ms. Selz writes, "Encased in a celluloid corset, Sam was then sandwiched between two full-length sheets of canvas, which were tied to a Bradford frame bed." He stared at the ceiling while processing the hallucinations, unending pain, and morphine that coursed through his body. "At twenty-one, he found the life he knew and the future he'd dreamed of to be over. He would never pilot a plane. A medical career was probably out of reach, too, as he couldn't walk, stand, or sit. He might never rise from his Bradford bed."

He was depressed and bereft, but a therapeutic watercolor set would change the course of his life. He began to paint. Elevated above his mattress, Francis could be placed on his stomach to reach a small canvas just below. "Art saved my life," he was known to say on many occasions. By the time he was in his late 30s, Sam Francis's paintings would garner the highest prices of any living artist.

Ms. Selz's description of Francis's fragile recovery, his art studies at U.C. Berkeley, and his first marriage as well as its decline is lucid and riveting. By 1950, he was living in Paris, enrolled in the Atelier Fernand Leger under the auspices of the G.I. Bill. By this time, New York had become the de facto epicenter of western art, usurping the dominance of the School of Paris. The swift eruption of Abstract Expressionism in postwar New York was the new language of modernism, soon to be supplanted by its second-generation abstractionists, of which Francis was a part.

At the same time, however, American artists were flocking to Paris. What emerged in Francis was a unique fusion of the American and European aesthetic. His paintings, still developing, became symphonic instead of muscular, assimilating French Impressionism, Color Field painting, Fauvism, and the works of Henri Matisse, Pierre Bonnard, and Claude Monet. His use of fluid pigments had the effect of watercolor, achieving a luminosity that utilized the white of the canvas as much as the color itself. The relaxed grids in his paintings first loosened and then began to open as they hurtled across the image field.

Ms. Selz writes, "The idea that color was embodied light and thus gave dimension and candescence to space had been flickering below Sam's consciousness ever since he'd gazed for hours at the play of light on the ceiling of his hospital room and stared at its white walls until he'd seen colors bleed through the plaster. Now he wanted to depict 'the substance of which light is made.' "

During this period, Francis traveled to Japan, a country he would briefly call home. He absorbed the Japanese aesthetic, most significantly the concept of "ma," an interpretation of empty space and the dynamic between form and non-form. Large areas of whiteness began to dominate his compositions, creating a sense of void or touching on his recollection of the open skies he saw as a pilot. Over time the grids collapsed, clustered, opened, then morphed into orbs, as in his "Blue Balls" series.

Returning to California in 1962, he continued to construct and deconstruct the spatial elements in his paintings. The artist's "Edge" paintings featured broad expanses of empty space breached only by pigment-saturated borders. While his reception in the New York art world was cooler than in Europe and Asia, his ascent continued.

Along the way, Francis collected numerous lovers and four more wives. He was the father of four children. His ferocious appetite and restlessness fueled a brilliant career but managed to pave the road toward a messy personal life. Plagued by residual health issues, he remained indomitable, finding acclaim as well as tremendous financial success.

In Southern California, his interests in music, science, literature, and philosophy expanded further, leading him to become one of the driving forces and a founding trustee of the Museum of Contemporary Art, Los Angeles. He formed a lithography studio in 1973, an alternative energy company in 1975, started Lapis Press in 1984, and in 1987 opened a naturopathic medical research center in Santa Monica. Since his first solo exhibition at Galerie Nina Dausset in Paris, Sam Francis has been the subject of innumerable museum and gallery exhibitions, and his art is represented in the collections of major museums and institutions across the globe.

In the last months of his life, suffering from prostate cancer, wheelchair bound, and unable to use his right hand because of a fall, Francis created a series of 152 small paintings using a stick with his left hand. Of the "Last Works," Ms. Selz writes, "However somber and lacking in rapture though they are, these paintings, with their brutishness, capture the mortality of this painter of eternal time. Matter blots out infinity. 'My paintings are a footprint of my whole life,' he told Jan Butterfield. 'Each painting is like my body print, taken at different moments.' These images were his last relentless steps, his bursts of energy before gravity finally trapped him. They exemplify what Nietzsche termed man's 'raging desire for existence.' "

Janet Goleas is an artist, curator, and writer who lives in East Hampton.

Gabrielle Selz, of Oakland, Calif., lived in Southampton for many years.