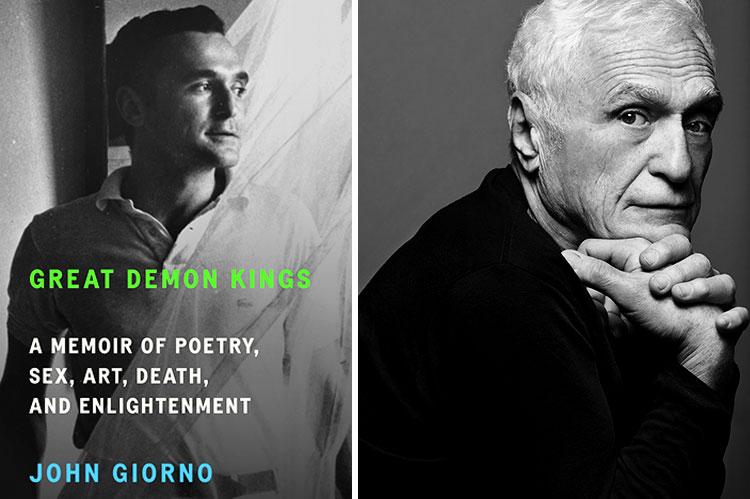 Ooh! John Giorno’s memoir, “Great Demon Kings: A Memoir of Poetry, Sex, Art, Death, and Enlightenment,” is one juicy read! On the salacious side, a sex romp. But serious, too. It is a rare event to be made privy to sex so open and matter-of-factly, and tenderly displayed. (“The Young and the Evil” this is not.)

You wonder how there was time enough for Giorno to have written his percussive poetry and edit and produce his influential Dial-a-Poet / Giorno Poetry Systems albums. He certainly slept with a top-notch A-list of 20th-century art figures: Andy Warhol to Robert Rauschenberg to Jasper Johns to William S. Burroughs. And he tells all, no detail spared.

In these pages, you may learn more than you’ll ever want to know about Rauschenberg’s nipples, not to mention other body parts, and William S. Burroughs’s privates. Ooh! When Patti Smith used to say about Burroughs, as she did at the Nova Convention, “He’s a hard man to get into bed.” Well, here’s a guy who did, and that’s not all they did together.

Back in the late 1970s, Giorno used to open for Burroughs at performances at the Ritz and other city clubs. It was a heyday for poets as rock stars, and they made the rounds, Giorno’s echoey intonations followed by Burroughs’s readings in his soft, gravelly voice from his most recent publications, “Cities of the Red Night,” “The Place of Dead Roads,” “The Western Lands.” Great nights, sold out.

In 1978, Giorno co-produced the Nova Convention, a three-day celebration of the Burroughs and Brion Gysin collaboration “The Third Mind,” featuring, in Giorno’s words, “an explosion of talent,” including Smith, Laurie Anderson, John Cage, Merce Cunningham, Philip Glass, and the B-52s. Gysin got Keith Richards to agree to end the event with a reading of “Talking Asshole” from “Naked Lunch,” promising not to advertise his participation. Word got out. Keith refused, and Frank Zappa stepped in, arguably, in hindsight, and even in the moment, just as much of a coup.

From this great success, Giorno was filled with optimism; “the best is yet to come,” he writes of that time. But no. “I wondered what it portended for the future, and got a heavy, negative feeling. Of course, what else. I did not know that my life, and each of our personal lives, would radically change. In 1979, the tragedies of the AIDS catastrophe that devastated our world would begin.”

AIDS was a crapshoot. Who got it, who didn’t. An insider’s insider, Giorno opines about why Burroughs did not: As “head honcho, he shot up first with a clean needle.”

Keith Haring, a lover of great transcendent openness and “blissful compassion,” “died of AIDS on February 16, 1990,” while “I stayed HIV-negative, one of many miracles given my voracious sexual appetite.” In Haring’s final year, he illustrated Giorno’s four-page poem dealing with the AIDS crisis, “Sucking Mud.”

Giorno devoted himself to activism in this crisis, even as he continued to frequent the clubs, baths, and toilets. Given that he glories in his survival, what astonishes is how much he wanted to die.

“Suicide became a lifelong obsession. Rarely did a day pass when I didn’t think of the happy possibility of it,” he writes of a lifelong depression. These dark thoughts seem at odds with Giorno’s biography. Born to a life of privilege, having grown up in Brooklyn and Roslyn Heights on Long Island, he came from supportive, “upper middle class” parents, and produced wealth as a stockbroker on Wall Street after finishing at Columbia University.

He met Dylan Thomas briefly, Jack Kerouac, and Allen Ginsberg, and early on was a muse to Andy Warhol, who famously filmed him sleeping, naked, in the five-and-a-half-hour silent movie “Sleep” (1964). He was one of Warhol’s “Beautiful Boys,” his film portrait one of a baker’s dozen in Warhol’s Screen Test series, and with Warhol he met Duchamp and Dali.

Chockablock with entertaining anecdotes of these encounters and a vibrant downtown scene before fame changed the artists and their milieu, the book also reveals Giorno’s insecurity as a minor player. He suffered the usual slights of the fickle art world culture, and tells painful stories in which friends snubbed him, lovers dropped him, and others edited him from the official record, as when Anne Waldman wrote a poem about her visit with Jasper Johns one summer, after Giorno had invited her. “Was I just a beautiful piece of meat?” he asks.

Many of these arty types, such as his lover Brion Gysin — painter, raconteur, restaurateur, and inventor of “The Dream Machine” — were known misogynists. Did it rub off on Giorno? He certainly relishes passing along an extremely meanspirited story about the writer Jane Bowles, whom he knew in Tangier along with Paul Bowles and the assortment of characters who congregated there. Then again, John Giorno just liked good gossip, giving as good as he got.

An acquaintance in Beat circles for five decades, I did not know him that way. And met up with him again last summer in East Hampton. Looking robust and handsome as ever, he was celebrating: His husband, Ugo Rondinone, with whom he shared a place in Mattituck, had a major exhibition at Guild Hall, and Giorno was the exulting spouse. By this time, he was a practicing Tibetan Buddhist and had had important shows at the Pompidou Center in Paris and at MoMA.

He told me he had written this memoir and was to do a little tweaking upon his return to Manhattan, where he resided in Burroughs’s former “Bunker,” a windowless space in a converted Y.M.C.A. on the Bowery. The book was almost ready to go, he said, little knowing that so was he. He seemed optimistic with his personal and professional success.

But, as in his pattern, after success follows disaster: This “great demon king,” defined as a man controlled by his big ego, inspired finally to realize the empty true nature of mind and become a Buddhist, died at age 82, a week after submitting the manuscript.

Regina Weinreich is the author of “Kerouac’s Spontaneous Poetics,” editor of Kerouac’s “Book of Haikus,” and co-producer and co-director of the documentary “Paul Bowles: The Complete Outsider.” She lives in Manhattan and Montauk.