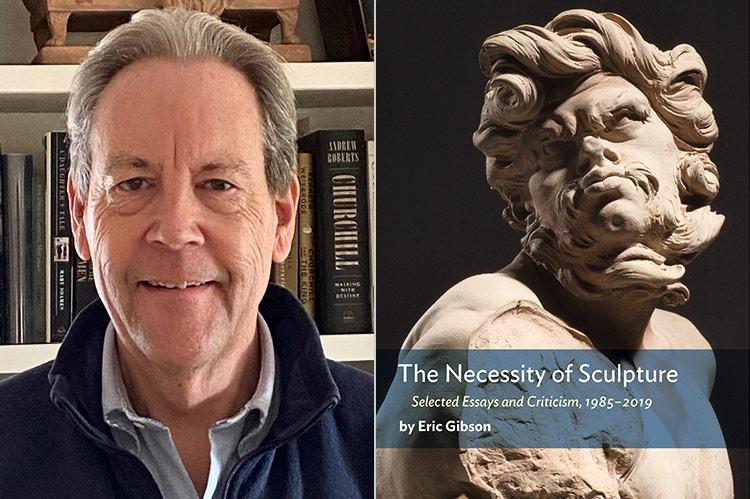 In his preface to “The Necessity of Sculpture,” Eric Gibson, the Arts in Review editor for The Wall Street Journal, mentions that “compared to painting, there are so few introductions to the subject” of sculpture that he sets out in this rich little book to answer that necessity. But it should be a big book, filled with illustrations of each of his subjects, from Mesopotamian cylinder seals (3500 to 500 B.C.E.) to Jeff Koons. Perhaps such an edition is in its future.

As this is a collection of 36 essays, each only a few pages long, I will not attempt a conventional review except to say that all are learned, interesting, sensitively written, and mercifully free of artspeak.

Fortunately for me, I have seen almost all whereof he speaks, so following his pages is like a stroll through past pleasures. I remember as a child in Paris being awed by the “Winged Victory of Samothrace” atop a staircase in the Louvre. I have seen Kamakura figures in Japan, Bernini in Rome, Henry Moore in London, Michelangelo in Florence, and myriad wonders at our own New York City museums.

Mr. Gibson often notices the relationship between figures and drapery as interpreted by different artists in different times and places. It is a feature of some sculpture that has also moved me especially. My favorite draped figures (which are not mentioned but surely known to the author) are the Venus Genetrix at the Met and the (probably) Greek giovinetto in tunica, which you can see only on the island of Mozia after taking a ferry from Trapani in western Sicily.

After my first crush on the “Victory” in the Louvre, my love affair with sculpture started in the early 1960s, when I was taken to visit Joseph Hirshhorn’s house in Round Hill, Greenwich, Conn., by the then-chairman of the Whitney Museum of American Art, David Solinger. On a high, square base to the right of the front door sat an almost life-size Giacomo Manzu bishop. In the terraced garden behind the house was another Manzu, a girl sitting on a chair. Staring straight ahead into the Connecticut landscape, she made me think that Degas’s little dancer (who gets a whole chapter to herself in Mr. Gibson’s anthology) had plopped down to take a rest.

Indoors, on French marble-top commodes, there were a number of Cycladic sandstone figures, aesthetic relatives of Modigliani, and small Henry Moore studies for monumental-scale works. All this was soon to go to the Guggenheim and then to its own museum in Washington, D.C.

Mr. Gibson marks the turn to modernism with an essay on Auguste Rodin, whom he credits with giving his “idea of the figure as an idiom open to limitless reimagining” to the 20th century. Two-thirds of the book looks forward into modernism. There are the familiar names (to me, at least): Brancusi, Picasso, Giacometti, Henry Moore, Richard Serra. Familiarity with their work makes the text meaningful.

Then there are others less familiar (to me, at least): Anne Truitt, H.C. Westermann, Mark di Suvero, William Tucker, Martin Puryear, Jack Whitten, Rachel Whiteread. To follow Mr. Gibson’s observations, I had to turn to the internet, where I gratefully discovered wonderful art.

Here is where it becomes clear that this is a book for connoisseurs, but could be a book for amateurs if it were better illustrated. All the more so because, as Mr. Gibson says, there are so few introductions to the subject of sculpture, and fewer still that contextualize modernity in tradition.

For the reader to whom some of these names just mentioned are also unfamiliar, I suggest following my example and looking them up online. You will see what the author means when he says that Anne Truitt’s “sculpture is quintessential high modernism,” that her “sculptures are no more than five or six feet tall . . . stand like sentinels . . . vertical, rectangular volumes . . . and painted.”

I was especially taken by images of Martin Puryear and Jack Whitten’s work: two African-American artists who are “wholly original voices in contemporary sculpture.”

The book ends with a surprise. A final essay is titled “Jeff Koons: Avatar of a New Order.” It comments on the retrospective staged by the Whitney as a goodbye to its uptown location in 2014. Mr. Koons is the shiny-metal-giant-balloon-dog maker we all know, and we all know because, as Mr. Gibson points out, Mr. Koons is a master of modern marketing, and it is almost impossible for anyone to have escaped seeing images of his work, if not the real thing. Here is some of what he has to say about Mr. Koons:

“Distasteful as it may be to bestow such an accolade on someone who traffics so brazenly in the shallow, the banal, the meretricious, and the cheap, he really is the most important artist of our time. Koons is the avatar of a new kind of art and a new kind of art world, both of which he helped to create.”

Mr. Gibson slips in an amusing double negative when he says, “Next to a Koons, your average marble by the Neoclassical sculptor Antonio Canova (1757-1822) is a roiling cauldron of passion.” Obviously, Canova — he of the portrait of Napoleon atop the naked body of a Roman god — did not make the grade for this survey of world-class sculpture.

Here’s hoping “The Necessity of Sculpture” will soon appear in a fully realized and generously illustrated edition.