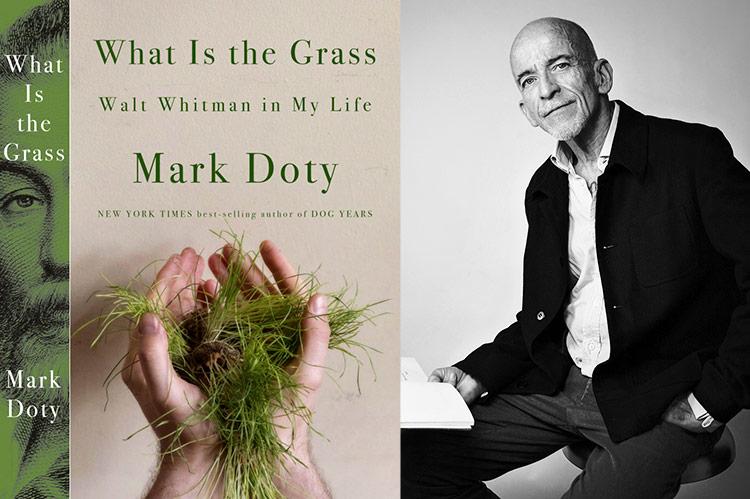 “Great poets are, by definition, undead,” Mark Doty writes in “What Is the Grass,” his memoir exploring the genius of Walt Whitman and the effect the 19th-century poet continues to exert on Mr. Doty’s own connection to this world. “The voice is preserved in the warm saline of ink and of memory. It cannot fade; time cannot take away a word of it. The personality, as it breathes through the preserved voice back into the world, is unmistakable: the voice of Walt Whitman is entirely his own. And of all poets, he seems to have understood in the canniest of ways that his audience did not yet exist.”

In times of deep sorrow, the concision and expansiveness of poetry offers solace so difficult to find elsewhere. Mr. Doty, a brilliant poet and memoirist, began his search into how Whitman, with his third-grade education, whose early work was “windy prose,” at times “melodramatic,” could ever become a writer of “intelligence and scope,” a poet with “sly wit and visionary luminosity” who went on to publish and republish versions of “Leaves of Grass.”

Whitman was 35 the first time his collection was published. The journeyman printer’s artistic work would influence many of the greatest 19th and 20th-century thinkers — Thoreau, Emerson, Bronson Alcott, and so many others. That Whitman’s poetry has kindled fires in Mr. Doty his entire career is evident throughout the pages of “What Is the Grass.”

“What poet ever addressed his readers so often and so directly? A digital scan of [Whitman’s] work reveals that the single word most used in his poetry is not the I we might have expected but you. The spiraling, edgeless ‘Song of Myself,’ his first great poem, ends I stop somewhere waiting for you.”

And Mr. Doty is waiting for all of “you” as he recounts the stories of his life that parallel or illuminate Whitman’s.

Growing up in a working-class Midwest home we had a limited number of books — although my parents would eventually invest a huge amount of money into a set of The World Book Encyclopedia. On the shelf with its garish cover sat “My Picture Story Bible.” But what I remember most distinctly is a beautiful volume, “Leaves of Grass,” with tooled brown front and back covers, the title and Walt Whitman’s name in gold leaf, all held together by a gold silken twine. Such reverential care went into the crafting of that object. And so its place of honor on the bookcase was next to my grandmother’s Bible.

The reason I mention this bookshelf is that my father was a printer his entire life. He loved the way the letters came from his hands, were transformed into metal then into print. The journeyman printer Whitman, who’d also built houses, cared about the movement of thought to sentences, about the shape of the words on the page. Until his later days, Whitman oversaw the look of each line, each book, which, of course, emanated from his care about the meaning of every word. He was a writer who continued to mold his seminal thoughts into new editions for decades after his pivotal 35th year publishing “Leaves.”

Mr. Doty’s memoir is not a complete paean. Nor is it bowdlerized. Cleverly, he examines Whitman’s “strangeness,” say, in the poem “Calamus.” There’s a page Mr. Doty used to think was the “creepiest.”

Regarding another stanza, he writes of the fact that he’s never “been able to encounter those last lines without a shiver.” Mr. Doty speaks of passages “odd and nervy that have lost little of their power to startle.”

And then Mr. Doty goes on to write about “Out of the Cradle Endlessly Rocking,” which he announces “is one of the strangest and most haunting of American poems, and a startling inquiry into why we make art.”

“The poem begins with an evocation of a remembered night’s walk through fields and woods near the center of Long Island, down to the shore: a landscape of Whitman’s childhood, more than a century before that land became the deracinated expanse of suburb and strip mall it is today. This nocturnal excursion is narrated in one gloriously extended sentence, layered and crystalline. . . .”

Out of the cradle endlessly rocking,
Out of the mocking-bird’s throat, the musical shuttle,
Out of the Ninth-month midnight,
Over the sterile sands and the fields beyond, where the child
leaving his bed wandered alone, bareheaded, barefoot,
Down from the showered halo,
Up from the mystic play of shadows twining and twisting as
if they were alive,
Out from the patches of briers and blackberries,
From the memories of the bird that chanted to me,
From your memories sad brother, from the fitful risings and
fallings I heard,
From under that yellow half-moon late-risen and swollen as
if with tears,
From those beginning notes of yearning and love there in
the mist,
From the thousand responses of my heart never to cease,
From the myriad thence-aroused words,
From the word stronger and more delicious than any,
From such as now they start the scene revisiting,
As a flock, twittering, rising, or overhead passing,
Borne hither, ere all eludes me, hurriedly,
A man, yet by these tears a little boy again,
Throwing myself on the sand, confronting the waves,
I, chanter of pains and joys, uniter of here and hereafter,
Taking all hints to use them, but swiftly leaping beyond them,
A reminiscence sing.

Mr. Doty speaks to us of Whitman’s “fractured motion.” Of the living being giving us this memory. And the “dazzling” plays with time within these lines.

Mr. Doty began his deep exploration of Whitman’s work — a critique so much more original than virtually any other literary criticism, given its personal connection to a poet — presumably in the last few years as this world has been undergoing enormous changes. Given the transcendence of Mr. Doty’s language and thought, we can only deduce that both he and Whitman are writing for an audience they didn’t know would exist. The prescient genius of Mark Doty as we shelter in place, wondering about songs of ourselves.

In the preface to “What Is the Grass,” he writes:

“Of the many poets I love, none has haunted me as Walt Whitman has. I want to keep company with him, in this book, want to account for his persistent presence in my life. And I want to try, at the same time, to seek out the wellsprings of the extraordinary flowering that seemed to appear out of nowhere in the middle of his life, in poems that look, sound, and think like nothing else before them. They have already reshaped American poetry, and the poetry of other countries and continents as well, but they have not yet finished their work of recasting our sense of what it means to be oneself, to be anyone at all.”

Lou Ann Walker is the director of the M.F.A. program in creative writing and literature at Stony Brook Southampton and Manhattan. She lives in Sag Harbor.