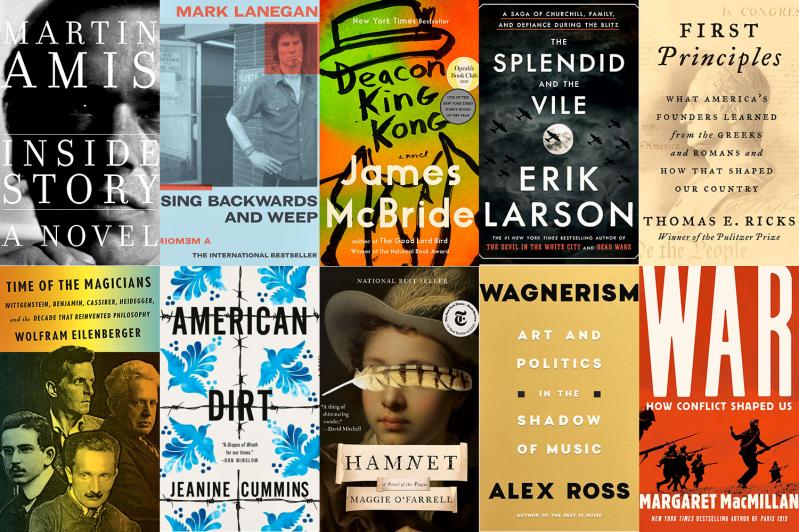 “Sing Backwards and Weep” by Mark Lanegan
The former Screaming Trees frontman and solo artist practically creates a new genre here: the "all-warts" rock 'n' roll memoir. A troubled teen from rural Washington State ("an arrogant, self-loathing redneck waster"), Mark Lanegan becomes a fixture in the 1990s Seattle music scene. He befriends, among others, Chris Cornell, Layne Staley, and Kurt Cobain — all dead now, of course, though not that Mr. Lanegan didn't try to join them.

The tale takes the reader from bottomless degradation to unlikely survival (with a little help from Courtney Love, of all people). Thankfully, Mr. Lanegan tells it all with unflinching directness and nary a shred of self-pity. (Hachette, $29.)

“Wagnerism” by Alex Ross
The New Yorker writer Alex Ross tackles the thorniest and possibly most influential musician in history, Richard Wagner. "Wagnerism" succeeds as a catalog of the composer's influence on cultural history, with Nietzsche, Joyce, Proust, Thomas Mann, and Virginia Woolf just a few of the giants who wrestled with and against this greatest of composers.

The book also looks unflinchingly at Wagner's anti-Semitism — though rightfully rescues the composer from the shadow of Hitler, who appropriated Wagner's music for the Third Reich. He reminds us that the Maestro — vegetarian, socialist, peacenik — would surely have loathed the Fuhrer. (Farrar, Straus and Giroux, $40.)

“Hamnet” by Maggie O’Farrell
A novel that imagines the life of Anne Hathaway and the tragic death of her son, Hamnet, who, scholars allege, inspired Shakespeare's greatest play. The writer himself is barely addressed in this novel, relegated to "the husband," who spends most of his time in London. This allows the focus to be on Anne's domestic life in Stratford and highlights the lonely rigors of motherhood with an absent spouse. The boy Hamnet is so finely wrought that his death comes with an emotional wallop. Winner of the 2020 Women's Prize for Fiction. (Knopf, $26.95.)

“First Principles” by Thomas E. Ricks
John Adams became devoted to Cicero at Harvard; Thomas Jefferson loved the Greeks and the philosophy of the Epicureans; at Princeton, James Madison pored over Plutarch, leading him to a suspicion of power and his theory of separate branches. At Penn, Donald Trump ate Burger King and grabbed . . .

Seriously, though, the subtext of Thomas Ricks's study of the Founders is a stark counterpoint to our current state of government and leadership. He reminds us (and the forces that would attack Western culture) exactly how a classical education culminated in America's Constitution. (Harper, $29.99.)

“The Splendid and the Vile” by Erik Larson
So wearing a mask in the I.G.A. is more than you can handle? You wouldn't have made it in London in 1940-41, where for eight months Hitler's Luftwaffe conducted nightly air raids. Perhaps the most novelistic of contemporary historians, Erik Larson tells a tale of defiance in the face of relentless aggression, interweaving the drama of Churchill's domestic life and its cracks under pressure.

Accidentally a metaphor for our times, "The Splendid and the Vile" is a celebration of how a nation, through cooperative resistance, came together to defeat a malignant enemy. Sigh. (Crown, $32.)

“Deacon King Kong” by James McBride
A rich brew of comedy and tragedy set in late-1960s Brooklyn. A local boozer named Sportcoat shoots a drug lord, setting in motion a rollicking plot that includes ghosts and buried treasure. James McBride's novel somehow straddles the genres of traditional crime novel and grand social satire, and shows the author's gift for both erudition and urban parlance. Readers looking for racial homilies will have to dig deep with "Deacon King Kong," which seeks entertainment and art first and delivers its buried rage with subtlety and grace. (Riverhead, $28.)

“Inside Story” by Martin Amis
A strange melange of fiction, memoir, and writer's chapbook, "Inside Story" is mainly focused on the death of the author's friends Saul Bellow and Christopher Hitchens. Both tales are grueling descents into death — Bellow as he succumbs to dementia, and Hitchens's long battle with esophageal cancer. Martin Amis's famous wit is here to cool things off, including a hilarious encounter between his busty girlfriend and the brilliant, pervy poet Philip Larkin. Still, a death-obsessed book, and (so he announces here) the author's last long one. (Knopf, $28.95.)

“American Dirt” by Jeanine Cummins
Propulsive and pulpy, "America Dirt" follows an immigrant mother and child's journey from Mexico to the United States. Lydia, the heroine, owns a bookstore where one day a charming man buys a few of her favorite titles, but she discovers he is the head of a local cartel whom Lydia's journalist-husband has offended. Fleeing north, she and her daughter will escape countless horrors, only to have the greatest challenge of all at the U.S. border.

Sadly, one of the most loved and widely read books of the year is not on most "best of" lists because of a made-up controversy: that the author, part Puerto Rican, was not "Latinx enough" to write it. Which is like saying Shakespeare wasn't Moorish enough to write "Othello." (Flatiron, $27.99.)

“Time of the Magicians” by Wolfram Eilenberger
Wittgenstein is hilarious! German philosophy is fun! True, actually — at least as portrayed in "Time of the Magicians." A kind of prequel to Sarah Bakewell's 2016 bestseller, "At the Existentialist Cafe," the book takes a gossipy, biographical approach to this group of brilliant, troubled thinkers. Their task is daunting: trying to understand human existence in the period following Darwin, Freud, and World War I.

Each of these philosophers fascinates, but Wittgenstein is the star here. After volunteering for the front lines in the war, he renounces his family fortune and decides to teach primary school — until he is reluctantly lured to Cambridge by Bertrand Russell. "Magicians" is studded with gems from Wittgenstein's bone-dry, almost accidental sense of humor. (Penguin Press, $30.)

“War” by Margaret MacMillan
A controversial book that traces war through human history, cataloging both the costs and the benefits of armed conflict. Citing examples of how history would have changed if the outcome of wars had been different, the author reminds us that war mitigates unemployment, provides economic stimulus, and ultimately introduced women into the work force. Artistic expression may be its greatest beneficiary, with countless poems, novels, and paintings born from its ashes.

A "pro-war" argument? Certainly not. But Margaret MacMillan forces us to contemplate war's inextricable link with human progress. (Random House, $30.)

Kurt Wenzel is a novelist who lives in Springs.

A Conference for Young People to Create Solutions
Get Outside, Get Moving
Two Traditions, One Fair in Springs
END_OF_DOCUMENT_TOKEN_TO_BE_REPLACED