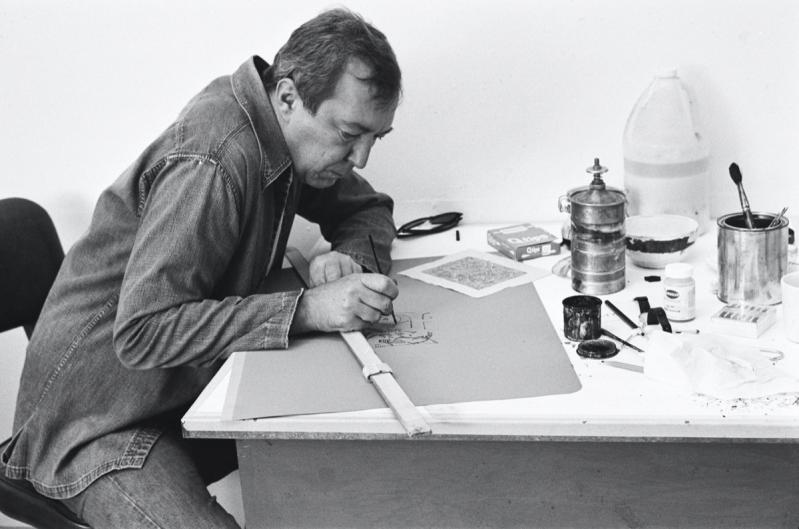 Jasper Johns drawing onto aluminum lithography plate for "0 through 9" (1977) at Gemini G.E.L., Los Angeles.
© 1977 Sidney B. Felsen
By Jennifer Landes

A survey of prints by Jasper Johns might seem like weak gruel compared to the blockbuster "Mind/Mirror" retrospective exhibitions at the Whitney Museum of American Art and the Philadelphia Museum of Art that closed in February. But before dismissing the Parrish Art Museum's "An Art of Changes: Jasper Johns Prints, 1960-2018" as an also-ran, consider taking a look.

Mr. Johns, a prolific artist now in his 90th year, has a complex oeuvre that is staggering when seen in full, almost too much to take in at once. This print show, which marks the same milestone, is focused on the personal themes and imagery that characterized his work and made its way repeatedly into his printmaking practice.

The Parrish's show has 72 works, which is still no small grouping. It does us a favor by concentrating our attention on these discrete methods of art-making and giving us a representative sample of his subjects without being overwhelming.

The retrospectives highlighted the multiplicity and reflections inherent in the artist's oeuvre and the themes he explores. In the Parrish show, perception and memory are the focus as the work continues to be organized thematically. The show originated at the Walker Art Center in Minneapolis and has been touring since 2019. Mr. Johns will be an honoree at the Parrish's Midsummer Dinner on July 9, along with Racquel Chevremont, an art consultant, Mickalene Thomas, an artist, and Miyoung Lee, a philanthropist and collector.

Although predominantly lithographs, there are enough other techniques on display, such as etching, drypoint, aquatint, screenprint, linocut, intaglio, and woodcut, to offer evidence of a virtuosity and curiosity in the artist's interaction with the mediums. Each communicates his themes differently, in the way sculpture, oils, watercolors, ink, and pencil explore different aspects of his other works.

While superficially it may seem that the Parrish and the Whitney are exploring different aspects, the undergirding principles are the same. As Mr. Johns reconsidered his imagery through the decades, he always found new ways to explore it. "I like to repeat an image in another medium to observe the play between the two," a quote from him in the Parrish wall text says. The flexibility of the print plate, stone, or block allows for further experimentation as well.

The Whitney noted similar qualities that have made the print medium attractive to the artist, how it "inherently involves reversal and reproduction, two hallmarks of Johns's art." The curators there noted how he flips compositions left to right or top to bottom. "He mirrors patterns around a seam or impresses surfaces with implements he sometimes leaves stuck to them. All this happens more easily, if not automatically, in printmaking."

Those are the corresponding physical properties inherent in the print process and what made his attraction to the medium inevitable. But there is also a conceptual underpinning to the strategies he employed in his canvases that crosses over naturally into prints. As the Whitney noted, "Johns often works recursively from one painting to the next to the one after that. An image frequently returns -- sometimes years and even decades later -- in a different size, medium, or palette. Prints both collapse and extend this modality."

The Whitney notes further that the plates, which he doesn't cancel after the final edition is run, allow him to easily return to old compositions and alter the plate or the process to achieve new ends.

It's no wonder the artist began exploring the medium early in his career. The exhibition's earliest work is a "Target" lithograph from 1960. He had begun painting simple and recognizable subjects like targets, flags, and numbers in the mid-1950s as a way to continue painting outside of the strictures of formalism, which was still dominant at the time.

The black-and-white lithograph doesn't seem like much at first, next to a later and more colorful iteration of the motif. Yet the varying shades of gray with black lend a marked softness to the image, and it looks more like an eye than a target. The other images next to it reveal the subject from different decades and different processes -- a bright screenprint, a muted color etching that includes soft ground and aquatint processes, and a much later intaglio version. This is what the Parrish show does best, narrowing the focus to a few discrete items that can be considered and absorbed in a manageable way.

With the American flag, Mr. Johns expresses in print early his conceptual explorations of the image as symbol and its meaning. Does a painting of a flag function as a flag? Can it be saluted or should it be? What happens when you change the palette from the expected red, white, and blue into something untraditional, like orange, black, and green, or gray and white as he does in "Flags," a double image from 1967 to 1968.

Initially, the eyes read the dual "Flags I" in the screenprint from 1973 as a more typical iteration, perceiving red, white, and blue to form the readily recognizable images. But the colors are interrupted in the stripes and in the "blue" grounds of the stars, which are an amalgamation of other colors. The stripes in the flag on the right are more noticeably corrupted by the strokes and traces of greens and blacks, but once perceived they make the subtler treatment on the left much more apparent. The piece is an ideal instance of how the artist's use of repetition causes viewers to consider how they apprehend his work, or any work for that matter.

The show moves through the decades, offering print versions of other themes he explored in later years, crosshatch marks, seasons, optical illusions, studio still lifes, and so on. Each offers the same opportunity to reflect on his methods and aims. Sure, there are some showstopping and memorable moments clearly recalled from the Whitney show, but the individual works in this exhibition seem to linger more distinctly.

The exhibition will remain on view through July 10. Information on the Parrish's annual Midsummer events and tickets, which start at $250 for the dance and $1,500 for the dinner, are available on the museum's website. An illustrated talk about Mr. Johns's use of flag imagery will take place today at noon at the Parrish. It is free with regular museum admission, and preregistration is recommended.