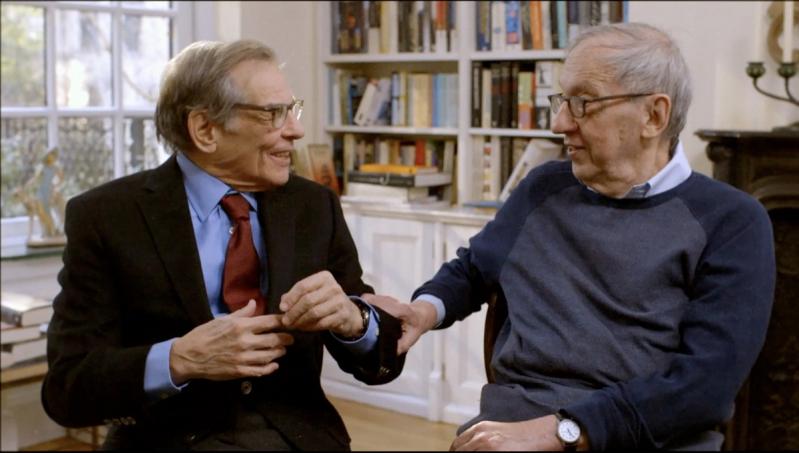 If you watched cable news shows during the pandemic, chances are the talking heads speaking from their virtual offices via Zoom and Skype had one book spine behind them in common. It was "The Power Broker" by Robert Caro.

The filmmaker Lizzie Gottlieb noticed it too. She begins her new documentary on the relationship of Mr. Caro, the writer, and her father, Robert Gottlieb, his editor, with a montage of clips of news analysts, contributors, and correspondents speaking from their studies, all with the same book placed prominently behind them.

She also includes clips of presidents, actors, writers, and editors speaking of the intellectual (as well as physical) heft of that 1974 biography of Robert Moses and its influence on their view of New York City, its suburbs, and even the rest of the world. The actor Ethan Hawke, the New Yorker editor David Remnick, the comedian Conan O'Brien, the self-described "comma queen" Mary Norris, the superagent Lynn Nesbit, and the writer Colm Toibin are a few of the marquee names who contribute their thoughts to the film.

The premise of a documentary based on the 50-year relationship between a writer and editor might seem dry at first pass. But history and memory serve up inspirational and legendary examples of such partnerships. Thomas Wolfe and Maxwell Perkins immediately come to mind.

"Turn Every Page: The Adventures of Robert Caro and Robert Gottlieb" premiered at the Tribeca Film Festival on Sunday. It was made by a director who understands that creative endeavors have innate tension and drama, mostly from witnessing them in her own household. Mr. Caro, who has a house in East Hampton, was of interest to her not just for his Pulitzer Prize-winning works, but for his absence from the private and family life of her father.

Mr. Gottlieb has edited some of the 20th century's most influential authors, such as Joseph Heller (Mr. Gottlieb came up with the number 22 in "Catch-22" after another book about war published just before Heller's used 18, his original number, in its title), John Le Carré, Doris Lessing, Salman Rushdie, Toni Morrison, Roald Dahl, Edna O’Brien, John Cheever, Bill Clinton, and Katharine Graham. He also edited The New Yorker magazine and has written his own books. Ms. Gottlieb noted that many of her father's writers came to the house or were otherwise around when she was growing up. Not so with Mr. Caro.

While the men do sit down and edit Mr. Caro's manuscripts together, the process can be contentious and prickly. Punctuation -- the semicolon is a frequent sticking point -- and vocabulary can cause sparks to fly. Mr. Caro likes the word "loomed" a lot -- too much, says Mr. Gottlieb.

For all of the focus on their relationship, we see them together really only at the end when they meet in the office to go over a portion of the latest manuscript. When they discuss how they met, how they work, and what makes the partnership succeed, it is individually, giving each man a chance to have a frank say about the other.

The film provides a full biography of both and describes, in summary, the young life and rise of Lyndon Baines Johnson, the obsessive focus of Mr. Caro's writing efforts since 1974. The process has yielded four finished volumes and a promised fifth one, the completion of which is complicated by the advanced age of both writer and editor. Mr. Caro is 86 and Mr. Gottlieb is 91. It is both men's intention to live to see it done.

As Ms. Gottlieb noted in her director's statement, Mr. Caro, an obsessive researcher who takes years to complete a volume, is "on the brink of finishing the final book. . . . As the publishing world and his avid fan base (including Presidents Obama and Clinton, among millions of others) await the final volume, the stakes for him to finish become higher and higher."

Perhaps in homage to her subjects, she took five years to finish her own thorough examination. She said she "recently apologized to Robert Caro for taking so long to finish the film. He closed his eyes for a long time, then looked at me with great intensity and said, 'Lizzie. It’s not about how long it takes to make. It’s about whether it will endure.' "

Whether he was conscious of it or not, "The Power Broker" endures not only because of his treatment of his subject but the people whose lives were affected by his subject's actions. Lisa Lucas, the senior vice president at Knopf Doubleday (where Mr. Gottlieb remains an editor ex officio after returning from leading The New Yorker) noted that not all books remain relevant in the years after they are written. But, she said, it was obvious from "The Power Broker" that Mr. Caro has "a real love of people." Women, people of color, the poor, "whoever is marginalized is given space." That has been key to its popularity in succeeding generations.

In the documentary, Ms. Gottlieb delves even further into the lasting impact of "The Power Broker," particularly on people whose lives were radically altered, and not in positive ways, by the changes Moses wrought to make all those highways. There are those still sifting through the ruins of once-vital neighborhoods destroyed by those roads decades after they were built.

Quite a bit of sausage-making takes place in the film, but even to one who has not read a single volume of Mr. Caro's work, it is fascinating. The writer and editor recall the arguments that ensued over the necessary cuts to the Moses book. Mr. Caro submitted a manuscript of 1,050,000 words, and the largest spine could only support a book of about 700,000 words. So Mr. Caro and Mr. Gottlieb cut 350,000 words from the text. Many books are only 100,000 words in total.

Mr. Caro discusses how he devised a rhythm to communicate the enormity of Moses's accomplishments in the book's first sentences to impress and draw in the reader. Later, we follow him to the L.B.J. library and the place where Johnson grew up to understand the exhaustive "Turn Every Page" approach Mr. Caro uses in research.

He wanted two volumes for the Moses book. Mr. Gottlieb's retort was that he could get people to read a book about Moses (who was not a household name at the time of the book's writing) once, but not twice. "I didn't want to get rid of this material either, but it had to go," he said. The result was a 1,700-page "blockbuster, and when you read it you don't want less, you want more."

Later in the film, Mr. Caro notes that not having those 350,000 words in the Moses biography was the impetus for asking for multiple volumes to tackle Johnson, observing that he is now working on the fifth volume of the three-volume series he requested.

"The possibility that he might not finish, and that Gottlieb might not get to edit it, looms over every scene," said Ms. Gottlieb. "I wanted to capture the delicate power balance between them, the steadfast dedication to craft, collaboration, and the incredible industriousness with which they approach the process of writing and editing. I wanted to really understand what it takes to create something that changes how people understand power, and that will endure."