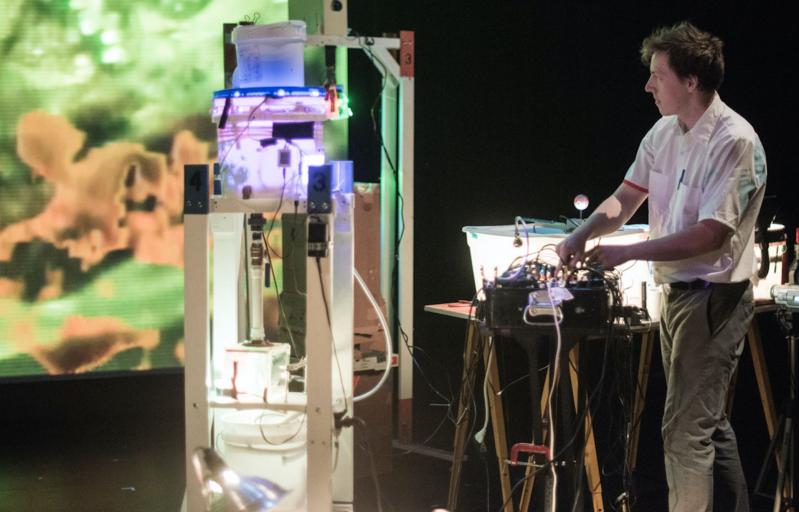 Britt Mosely's "Buena Vista" focuses on the construction and evolution of miniature terrains, blown to huge proportions with projectors over an electronic music score.
By Zoe Lubetkin

"Buena Vista," an audio-visual puppet performance by the New York artist Britt Mosely, will debut at the Folly Tree Arboretum in Springs on Saturday and Sunday at 8 p.m. It is the first time the performance will be staged in its entirety.

"Buena Vista" focuses on the construction and evolution of miniature terrains, blown to huge proportions with projectors over an electronic music score. The performance is all live, yet presented as if "you were to watch a film at a theater, but someone is making the film right in front of you -- but we're doing it in miniature," Mr. Mosely said recently. The camera remains close to the action, and the images are then projected, which allows for a presentation that feels "gigantic and wild," he added.

During the performance, Mr. Mosely creates terrain from household objects like soap. The idea has been evolving since his studies at Brooklyn's Pratt Institute, from which he graduated in 2012, where he would create landscape and background-driven films of miniatures of foam or crayons. "I [had] always wanted to do these landscape videos," Mr. Mosely said. "I never really resolved whatever that was."

After graduation, he started doing puppet performances. "Once you do it one time, people think of you as the puppet guy," he said. A road trip through New Mexico and southern Colorado took him to Buena Vista, a valley town surrounded by mountains, and sparked the idea for this weekend's show.

"If I could represent these visuals in small scale, or in . . . my puppet language, that would be so, so neat," Mr. Mosely said.

"Buena Vista" is produced entirely by Mr. Mosely, who creates and performs all video elements, and the sound engineer Sean Pettell. Collaborators since 2015, the two met at Pratt and became re-acquainted in Greenwich Village on their lunch breaks. "Buena Vista" isn't their only endeavor: They have also hosted an electronic radio show and an improvised music and comedy podcast called "Poppa Squash" together.

Mr. Mosely and Mr. Pettell developed the show over several years, chiefly in residence at Alfred University's Institute for Electronic Arts and at the St. Ann's Warehouse Puppet Lab in Brooklyn. During that time, they had the opportunity to show 15-minute segments in workshops and present experimental video elements in galleries such as Manhattan's Dixon Place. The performance is partially state-funded by a re-grant program of Wave Farm.

"This is sort of the culmination of all of these different workshops and residency programs the piece has been developed in," Mr. Mosely said.

The Folly Tree Arboretum, where the production will be staged this weekend, is a nonprofit founded by Tucker Marder in 2013 to "promote an exuberant environmental ethic through art and science," according to its website. It hosts landscape installations, workshops, lectures, and performances at its property on Springs-Fireplace Road.