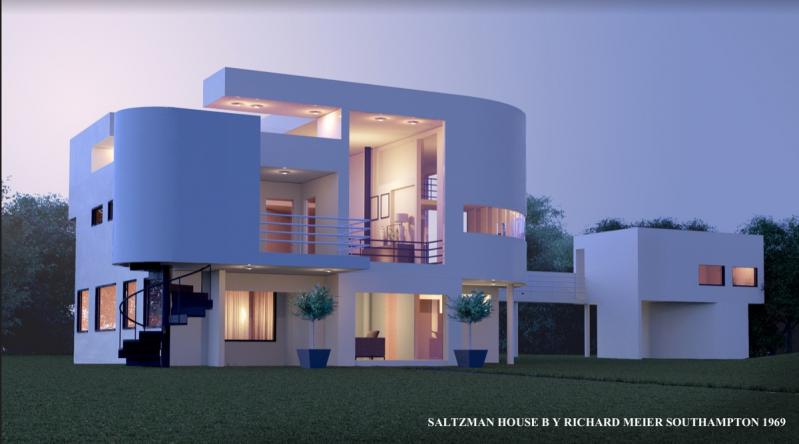 The Saltzman House in East Hampton, designed by Richard Meier and built in 1969, is still enjoyed by the family who built it.
By Jennifer Landes

There was a time when a beach house here was not only the large Victorian shingle pile of yore (and of the present), but something funky and hip. It was smaller, more utilitarian, and served as mostly seasonal shelter, a place to crash after a day and evening spent outdoors, typically built in the dunes of the artier or more literary hamlets, like Amagansett, Wainscott, Bridgehampton, and Sagaponack.

There are still a few of those quirky modernist houses around, but they're becoming rarer. Aficionados of mid-20th-century architecture have mourned the passing of many well-sited buildings -- considered "junky things from the '40s and '50s" by those who marketed and purchased them, as the cultural historian and critic Alastair Gordon noted. Their buyers preferred "a big neo-shingle style kind of manor house" where they could "pretend they were English gentry."

A group of professionals in various fields involving architecture and design gathered virtually last Thursday to discuss the persistent danger to an important aspect of South Fork history and landscape: its legacy of modernist design. Presented by the Amagansett Library and the East Hampton Historical Society, the talk was organized in response to Timothy Godbold's initiative Hamptons20centurymodern, which is working to raise awareness of that legacy in order to preserve it.

Led on a fast-paced roundtable by Grace Beuley Hunt, the editor of Luxe Interiors + Design magazine, a co-presenter of the event, they discussed the losses, the wins, and the sites now in peril as they addressed how to educate and convince potential buyers that these structures are worth saving.

The panel's far-ranging experts demonstrated how multipronged such an effort must be to succeed. In addition to writers and historians, an architect, a designer, a homeowner, a real estate agent, and an advocate well versed in preservation law on macro and micro levels all offered their insights.

Mr. Gordon and Bruce Nagel, an architect who has worked with Richard Meier and Gwathmey Siegel & Associates and helped restore and update some of the properties that remain, emphasized the cultural period these shelters came from, whether it was artist-driven, like Robert Motherwell inspiring a contemporary architect like Pierre Chareau in the '40s and '50s or the free-spirited impulses of the '60s and '70s.

"Architecture is just a reflection of social norms," Mr. Nagel said, particularly in the later period. "They weren't spending a lot of money for these houses. These things were thrown up cheaply." The focus was on invention of new forms and shapes for buildings, optimal siting, and window placement. He added that the architect was critical to the process, but the client was the one driving to push the limits of what architecture could be.

With no Long Island Expressway until 1955 and the extension to Riverhead not completed until 1970, he said, people who came here then were really looking to get away and to spend time in nature. Today's houses are "precious, covered with marble, and people take off their shoes when they walk in and so that they don't dirty the floor," he said. "It's just a whole different attitude about how people perceive themselves, it's not really about architecture."

A few historically significant structures from that period are in immediate danger. Sarah Kautz, the preservation director at Preservation Long Island, noted that these buildings will survive only if the community voices its support for them. In one case, the owners of a Norman Jaffe house at 88 Meadow Lane in Southampton Village have applied for its demolition. She encouraged those listening to spread the news about a hearing for the proposal at the village's architectural review board meeting on Monday at 7 p.m., when members of the public can voice their concerns.

At the same time, Gov. Andrew M. Cuomo has a bill heading to his desk to broaden the use of the community preservation fund for preservation of historic buildings on sites purchased with money from the fund. If signed, the law would allow adaptive reuse and rehabilitation of those buildings for community housing.

At present, towns are allowed to use 10 percent of their fund's money on management and stewardship of their properties. According to Preservation Long Island, East Hampton is using only 2 percent of its revenues for that purpose. Tapping into those additional funds could help restore and manage properties like the James Brooks and Charlotte Park site in Springs, which includes the studio built by Brooks in 1959, emblematic of the modernist style of the time. The buildings have deteriorated while East Hampton Town has pursued their removal in favor of open space.

Generally speaking, there are distinctions that can be helpful but don't guarantee preservation, Ms. Kautz said. The National Register of Historic Places is one such listing of significant properties. In New York State, however, each municipality can pursue its own designation of landmark status, historic district, or cultural resource.

Rather than enforcing strict rules, towns here have opted for "carrots" instead. Southampton Town, for example, uses tax abatements, financial assistance for maintenance, and easements to encourage homeowners to preserve their historically significant houses. Property under an easement is subject to the town's authority "to review and approve physical changes to the exterior of the preserved property to ensure they are compatible with, and sensitive to, the historic resource." The homeowner receives a payment amount from the town directly tied to how restrictive the easement agreement is.

These governmental and institutional efforts are the baseline, but cultivating wealthy preservation-minded buyers is another tactic. David Netto, a Los Angeles-based designer who owns a hexagon-shaped "house on stilts" in Amagansett, said, "I never thought any of my clients would respect or be very interested" in it, but "everybody loves that house on stilts."

At this moment, he said, the young and rich "want to live like a surfer. . . . I never really saw that coming." The idea of coolness, elevated with good design and decor, ends up being very compelling, and could even motivate them to buy and save these properties, simply as an expression of style.

Mr. Netto added that the grander modernist residences, such as Ellin Saltzman's 4,000-square-foot house designed by Mr. Meier, have a much better chance of survival. Larger places "where you still feel the sand between your toes," and which are "every bit as sexy" as the more intimate beach shacks, are more likely to find appreciative buyers in this area.

Ms. Saltzman has been coming to East Hampton since 1944 and had a long and successful career in fashion. In 1969, she and her husband, the interior decorator Renny B. Saltzman, built their house on a three-acre potato field off the beach in East Hampton. She described it as a family place, where her children grew up and eventually were married. "It's always been a happy home." She said she never once thought of moving.

Maureen Erbe and Geoff Gehman also participated in the panel.