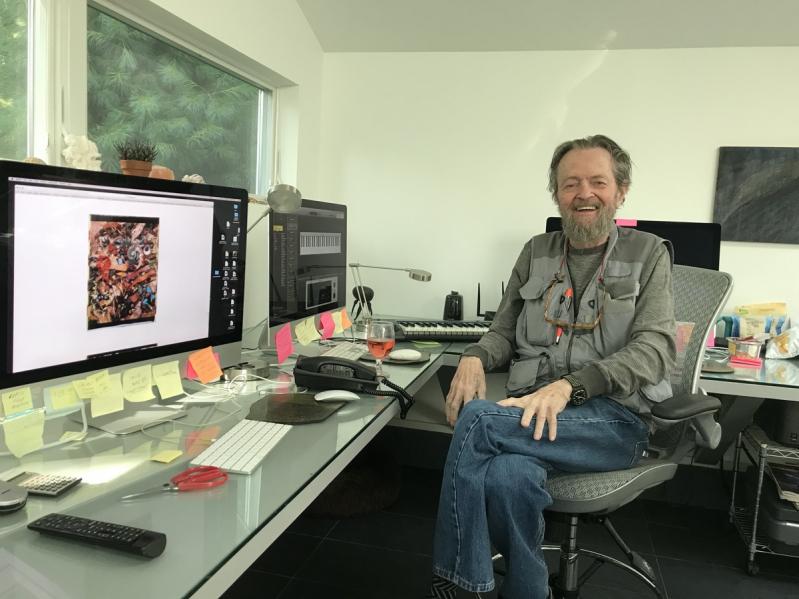 Frank Gillette discussed his career as a video and installation artist, photographer, and painter in his East Hampton Studio.
Mark Segal
By Mark Segal

It was 1967 when Sony introduced to the American market its Portapak, a self-contained analog videotape recording system, including a camera and deck, that was light enough for almost anyone to carry. For many visual artists, it amounted to nothing less than a tectonic shift.

The first four units in the United States wound up in the possession of Marshall McLuhan, the Canadian communications theorist  best known for his 1964 book “Understanding Media.” (Its first chapter is called -- yes -- "The Medium is the Message").

Frank Gillette was teaching a seminar on McLuhan at the Free University of New York at the time, where he met Paul Ryan, a research fellow who was working with McLuhan. Ryan loaned the Portapaks to Mr. Gillette, who in 1968 created “Keep,” a four-channel black-and-white video.

“ ‘Keep’ initiated me into the idea of not using video as a single screen, but to construct an interaction between screens,” said Mr. Gillette during a conversation in his East Hampton studio. “It was the first thing I did. It was on the borderline between harvesting chance and sheer chaos. If I didn’t get those four screens, I would've been lost.”

Then, a year later, came “Wipe Cycle,” shown in “TV As a Creative Medium” at New York’s Howard Wise Gallery and widely acknowledged as a groundbreaking video installation.

Conceived by Mr. Gillette and executed in collaboration with Ira Schneider, “Wipe Cycle” consisted of a closed-circuit television camera, six channels of video, nine stacked television monitors, and a video switch board. The piece was positioned in front of an elevator, so that each visitor was immediately, and simultaneously, confronted with his or her image at three different points in time and eight locations in space.

“Many of the visitors lingered, trying to figure it out,” Mr. Gillette recalled. The only one who understood the time delays right away, he said, was Andy Warhol, who was carrying a suitcase. “The first thing he did when he experienced it was to change the suitcase from one hand to the other and back again.”

Mr. Gillette has been called a video pioneer, and rightly so. However, while the characterization is, if anything, an understatement, he said, “I take umbrage with the categorization of video artist.”

He was a painter while attending Columbia University in the late 1950s and subsequently at Pratt Institute, where he studied with Tony Smith. He dropped out of each institution after two years. A self-described “child of Abstract Expressionism,” his paintings at that time fell mostly within the parameters of the color field movement.

In 1973, the Everson Museum of Art in Syracuse gave itself over to Mr. Gillette, devoting four galleries to “Video: Process and Meta-Process,” with a grand total of 55 monitors in the show. It was a milestone for the artist: the first time he'd made and exhibited ecological systems.

“Terraquae” consisted of five identical cases, each nine feet high, six feet long, and two feet wide. The first contained agar, spores, and bacterial molds; the second, iguanas and geraniums; the third, snails, slugs, and insect larva; the fourth, tortoises and tarantulas, and the fifth, shell life, crabs, and crickets. Cameras mounted on each case scanned the contents and transmitted it, in real time, to a horizontal matrix of 10 monitors, in the same gallery.

In an essay in “Axis of Observation I: Frank Gillette,” published in 2018, the art historian Sabine Flach noted that with “Terraqaue,” Mr. Gillette became “the principal in the establishment of a new art form: the environment.”

His interest in the living environment has roots in his childhood. His father was an ichthyologist, and “I grew up in an atmosphere where animals were considered family.” Their pets included a rhesus monkey, a parrot, a dog, two cats, three cages of birds, and, at any given time, 16 fish tanks.

While he has always moved among video and painting, photography has been integral to his practice as well. From the mid-'70s to the early ‘80s, he created a series of grid pieces, the largest of which consists of 72 same-sized photographs of the tide line, from morning to evening, on Mecox Bay in Water Mill. He has been living and working on the East End on and off since 1972.

Many of the grid pieces were assembled from Polaroid images. “Polaroid was the equal of the Portapak in that it was instant. For that technological reason, and being consistent, I wanted to use an instant camera. Polaroid saved my ass.”

Polaroid also loaned Mr. Gillette a large-scale camera, which produced 20 x 24-inch images. He made almost 300, and has two dozen left. Composed at Polaroid Studios in Cambridge, Mass., and New York in the mid-'80s, those photographs are stunning compositions of flowers, shells, and other forms of plant and animal life. Many are now in museum collections.

With the advent of the personal computer and its various software programs, Mr. Gillette began to create hundreds of dazzling digital prints. Told they were difficult to figure out, he replied, “My name is ambiguity. I’m interested in harvesting the random, and then making as much variety as possible among the random.”

Of “Alchemy 1” and “Alchemy 2,” two strange images that suggest decaying remains, he said, “No one can figure out how I made them, which I appreciate. Is it nature? Is it made?”

Taney Roniger, an artist and writer, has referred to “the apocalyptic world of Frank Gillette’s digital images. Redolent of ruin and the anguished screech of nature, it is a world fraught with antagonism, where rusted and barren machine innards and heaps of industrial waste vie with the gossamer-like bodies of wolves, boars, and tortoises . . . .”

“I am very interested in treating digital media as closely as possible to a Baroque, painterly way,” Mr. Gillette told Stars magazine in 1999. “The question, for me, is how do you translate the pictorial structure of Baroque painting to digital media?”

The same approach applies to his ongoing video project: three video triptychs, each with three channels of imagery on three screens. “It involves two classical genres that move. One is still life, which is on the left, one is landscape, which is on the right.” The central screen shows mirrors integrated in the landscape, both reflecting it and, in what becomes a source of suspense, being suddenly smashed. The soundtrack consists of rushing water, thunder, waves, wind, and electronically generated sounds.

The inspiration, said the artist, was a soliloquy in Act 3, Scene 2, of “Hamlet,” where the Dane addresses the Players about “the purpose of playing, whose end, both at the first and now, was and is to hold, as ‘twere, the mirror up to nature . . .”

Each of the three video loops is of a slightly different length, so that when they repeat, they always do so at a different time and in a different relationship. The viewer will never see the same images at the same time again.

The first of the triptychs was shown at the Everson Museum in 2019 in the exhibition “Frank Gillette: Excavations and Banquets.” It is titled “Riverrun,” an homage to Joyce’s “Finnegan’s Wake,” which he has been reading “on and off, mostly on, since I was at Columbia in the early ‘60s. It forces you to focus.”

In his 1973 book “Between Paradigms: The Mood and its Purpose,” Mr. Gillette characterizes man as “a creature separated from the total environment by self-conscious processes, evolving a technology with constantly diminishing ecologic agency and constantly increasing toxicity.” He wrote as well that “There is nothing inherent in the technological process that necessitates polluting the biosphere.”

The arc of his career becomes vivid when he discusses a long essay he is writing titled “Art and Natural Destruction in the Anthropocene,” which ponders “How do you make art in the conditions we’re under? The Anthropocene may be the last cene . . . we are basically causing our own demise. In a strange way, it’s collective suicide . . .”