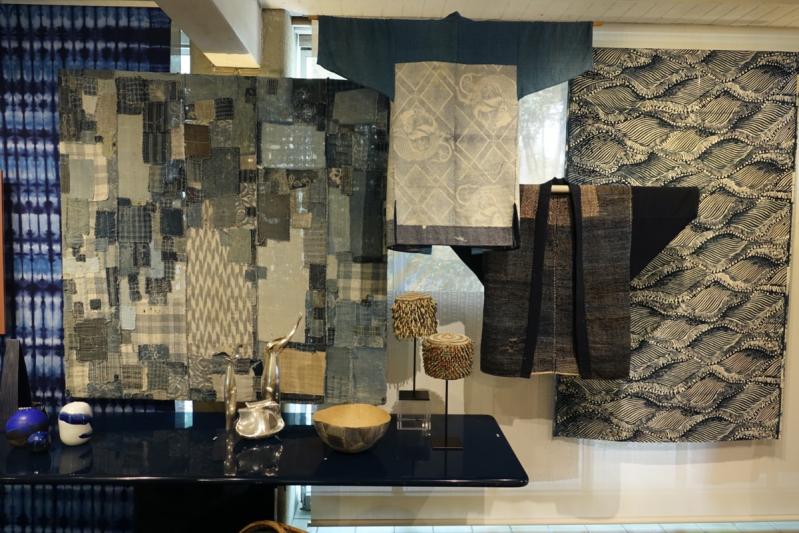 A grouping in indigo is part of the installation of fabric, decorative objects, and clothing in "Jack, Larger Than Life"
By Jennifer Landes

During the first season after the death of Jack Lenor Larsen, LongHouse Reserve has honored its founder by keeping the East Hampton garden and art center almost as full of events as it was when he was alive.

Even with Covid-19 remaining a concern for gatherings, LongHouse has managed to mount a distanced benefit, an opera performance, twilight tours, and a number of other special receptions and events. Those were in addition to this season's new installations of sculpture on the property, an exhibition honoring Larsen in the gallery, and a newly opened "Art Foray" in which intrepid visitors are tasked with finding art pieces hidden among the foliage with a chance to win one of them as a prize.

The centerpiece of all of these is the "Jack, Larger Than Life" exhibition in the gallery. It was lovingly organized by Wendy Van Deusen, Larsen's longtime partner on curatorial projects, along with Sherri Donghia, his collaborator at Sunbrella, where he contributed more recent designs. The show is an evocative culling of Larsen's personal collections of clothes and accessories, his furniture and other decorative objects and art forms, and examples of his genius as a weaver and textile designer.

Both newcomers and those familiar with Larsen's work from print or video are in for a glorious treat, with many examples of the actual fabrics he created to meet the needs of mid-20th-century design and architecture. There is the fabric he made for Lever House, an open-weave mesh shot through with metallic thread. New to New York City, he won a nationwide competition to make the curtains for the building's glass cube first floor. The feat is reminiscent of Brunelleschi winning the commission for the Baptistry doors at the Florence cathedral in the early Renaissance and his eventual design for the cathedral's dome, the kind of radical innovation that marked both eras in art and architecture.

The back wall features a sumptuous display of rich velvets in deep colorful patterns. The pieces showcase Larsen's mastery of his medium, as he developed the perfect fibers and length to make such full saturation possible. One side of the exhibition space, which was designed by Lee Skolnick, features earth tones in both Larsen's designs and personal collection. The opposite wall is a collection of blues, blacks, and grays. The velvets act as a joyful "anything goes" transition, still kept in harmony by the curators.

Larsen's boundless energy and curiosity made him a ready vessel to learn and spread knowledge of dying and weaving techniques from various cultures all around the world. There are examples of several techniques he picked up and elaborated on in the gallery. The Swazi fabric for the Wolf Trap Theater in Virginia looks raw and tribal, while the Magnum fabric for the Phoenix Opera House enchants and refracts light with Mylar, a breakthrough material that his friend Andy Warhol was also using creatively during that era.

One fabric on view, Remoulade, which he created in 1956, has 40 different types of thread. There are metallic double weaves that are reversible, and an Ikat fabric in which he did the inverse of the traditional process, dying the weft instead of the warp, a process that made the pattern even more challenging to gauge.

The materials Larsen designed for modern skyscrapers wouldn't sag, burn, soil, or fade. He managed to address all of the concerns, and "solved the problem of modern buildings," as he noted in a short video on his life and accomplishments that is part of the exhibition.

Considering the size of the gallery, it's amazing that so many examples are on display in a way that is cohesive and expressive of the breadth of his passions and creativity. From upstairs, Ms. Van Deusen brought down a bamboo pole with arms that he devised to hang his scarves and hats. A dismembered arm from a wooden statue was transferred to the gallery from the residence's guest bathroom where it served as a towel bar to illustrate his irreverence.

If you think you know all you need to know about Larsen, his career, and his avocations, this exhibition will still surprise you. It touches on all of the "firsts": first American to have an exhibition at the Louvre in 1981, first fabric designer to print on towels and sheets, the first to design fabric for airline seats, and other innovations, or the range of collections. Those who recall the pieces from their places in his residence may "see" the objects for the first time as they are removed from a more domestic context into the spotlight of the gallery.

Ms. Van Deusen's groupings of the objects by color highlights the way Larsen approached his gardens and the color themes he developed there. On the grounds this year are additional sculptures by Beverly Pepper, John Giorno, and Prune Nourry to keep the mixture of art objects fresh and add to that feeling of discovery that marks every new visit to the site.

"Art Foray II" marks the return of a scavenger hunt in which small art pieces are hidden on the grounds for visitors to spot and post on social media. Those who find all of them will be entered into a drawing to win one of those works. Scott Bluedorn is the curator as well as one of the contributing artists, who also include Chelsea Hrynick Browne, Saskia Friedrich, Robin Gianis, Mamoun Friedrich-Grosvernor, Mariah Keolani, Bastienne Schmidt, Jonathan Shlafer, and Aurelio Torres.

The gallery show has been extended through Sept. 12. "Art Foray" will continue through Oct. 9.