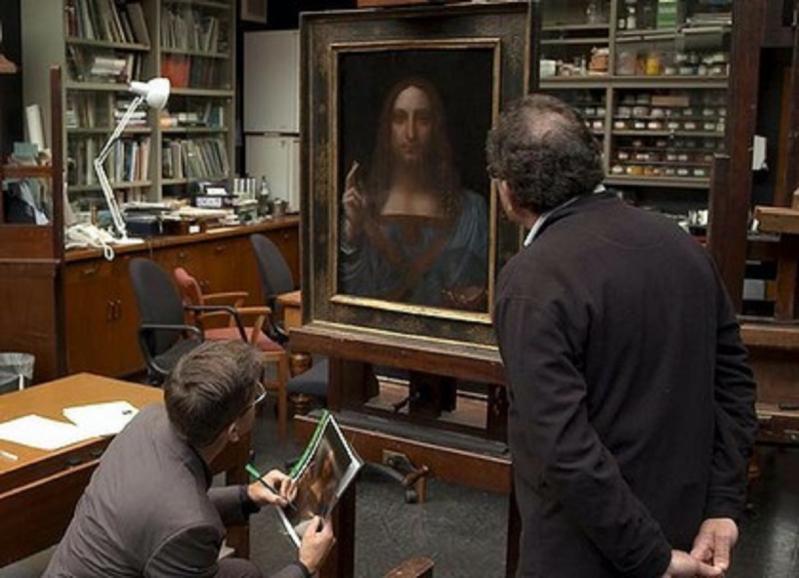 It's the type of story that starts the blood pumping in anyone connected to or interested in the art world. A missing work from one of the most venerated Renaissance masters re-emerges centuries later in Louisiana. It goes on to fetch $450 million at auction several years later, shattering records and capturing imaginations and headlines worldwide.

That's the short and simple story; the full tale is anything but. The painting of Christ as "Salvator Mundi," or savior of the world -- attributed to Leonardo da Vinci depending on who is making the assessment --- purchased for $10,000 at a New Orleans auction house in 2005, would come to epitomize the more unsavory aspects of the art market up to and beyond its jaw-dropping sale at Christie's in 2017.

In the documentary film "The Lost Leonardo," Andreas Koefoed, a Danish director, traces the story back to its recent origins using interviews, contemporaneous documentation, and recreations of events to frame a dynamic narrative with commentary by skeptics and devotees alike. The film, part of HamptonsFilm's SummerDocs series, will be shown at Guild Hall on Saturday.

Mr. Koefoed's background in sociology seems well suited to the motivations of those involved. His film reveals more about human nature than a definitive determination on whether or not the painting is by the hand of the master (and whether it even matters, when all is said and done).

Speaking recently by phone from Denmark, the director said he began work on the film in 2018, a few months after the auction. The appeal of the pitch from a Danish producer was immediate. "There are so many layers to the story: the long-lost treasure that someone finds by coincidence and buys for almost nothing, and it becomes the world's most expensive object."

As he was making the film, he realized that the "never-ending question of authenticity" allowed the people in its orbit "to use the painting for their own purposes." This included the museums that wanted the attention a rediscovered masterwork would garner, the experts involved in asserting or debunking its bona fides, the auction houses that collected their own percentages from the sales, and the ultimate owner of the work, reputedly Mohammed bin Salman, the crown prince of Saudi Arabia.

Mr. Koefoed noted that the painting is a way for bin Salman to "rebrand his country. If he can get hold of a rare Leonardo da Vinci painting, he knows how much that is worth." The painting, dubbed "the male 'Mona Lisa' " by Christie's during its world exhibition tour, offers the potential for art-centered tourism and the money that brings to any nation or institution lucky enough to have a world-famous artwork (or works) to display.

In his quest, the director found and convinced people who were closest to the painting to describe their role in the saga. The film moves mostly chronologically, from those who discovered the panel, to the woman who restored it, to its first private sale after several false starts, and the fallout from some financial chicanery by dishonest brokers. Elements of money laundering and tax evasion enter the picture as possible motivations for wanting to buy a painting of such value.

Mr. Koefoed highlights the role of free ports in thwarting tax collectors and keeping art objects out of the view of those who want to appreciate them, the owners treating them primarily as assets or tools to access cash that could otherwise not be moved out of certain countries.

The director found himself in the middle of two secretive worlds, the art world and the financial world, "where paintings are used as financial tools . . . investments to hide money." It does not stop there. "In the third act, there's the geopolitical world, where on a state level paintings are discussed." He pointed to talks between bin Salman and France's President Emmanuel Macron about lending the painting to the Louvre. "I think it's mind-boggling that that old piece of wood with some paint on it could reach that level from obscurity just 12 years before."

Diane Modestini, who restored the work, is treated mostly sympathetically, although her motivations have been questioned by those who doubt the painting's veracity. She spent four years on the work, finding an earlier drawing on the panel that placed the thumb in a different position. This working out of the fine points of the composition, usually done only in the original, was key in her conversion to true believer in the work. At the same time, it was her painstaking reconstruction that caused naysayers to note that it had become her painting by the time she was done. Even if the painting were authentic, they asserted little remained of the original hand.

According to Mr. Koefoed, the work Ms. Modestini did was extraordinary, taking much longer than usual. "In the film she says she was doing this out of interest in the painting itself, not out of any financial interest, and I have no reason to believe that is not true."

As to the rumors that she was part owner of the painting, which would have netted her a percentage of the price of the first resale, which was $75 million, Mr. Koefoed pointed out that it's not unusual or irregular for conservators to own portions of the paintings they restore. What was unusual here was that the authorship of the painting was not certain when she started; rather it was discovered during the restoration. "In that case it could be problematic if she had a financial interest, but she told me she didn't and I believe her completely."

Following this story through all of its convolutions must have felt a bit like picking up a rock and finding some squirmy and seedy elements underneath it. Mr. Koefoed said he reached out to everyone involved. Some declined to be interviewed, but he said he never felt intimidated or threatened. He added that those reluctant to speak likely wanted to avoid the controversial aspects of the story. "They can see how every little new detail about this painting creates headlines all over the world. It's probably safer not to speak about it."

Experts who helped authenticate the painting were also reluctant. "They may be afraid of losing face."

In the end, he sees the documentary as showing "the best and worst of human beings." The best being the need to believe in something divine and create "a space where we can let go of our feelings. That's how we can use art, that's why we need art." As the film demonstrates, however, speculation and greed can take over when art is treated primarily as an asset.

"The Lost Leonardo" will be screened at 8 p.m. and followed by a discussion with Mr. Koefoed, Alec Baldwin, and David Nugent, the artistic director of HamptonsFilm. Tickets, which are $40, are available on the HamptonsFilm and Guild Hall websites. Distributed by Sony Pictures Classics, the film will be released in theaters in New York and Los Angeles on Aug. 13.