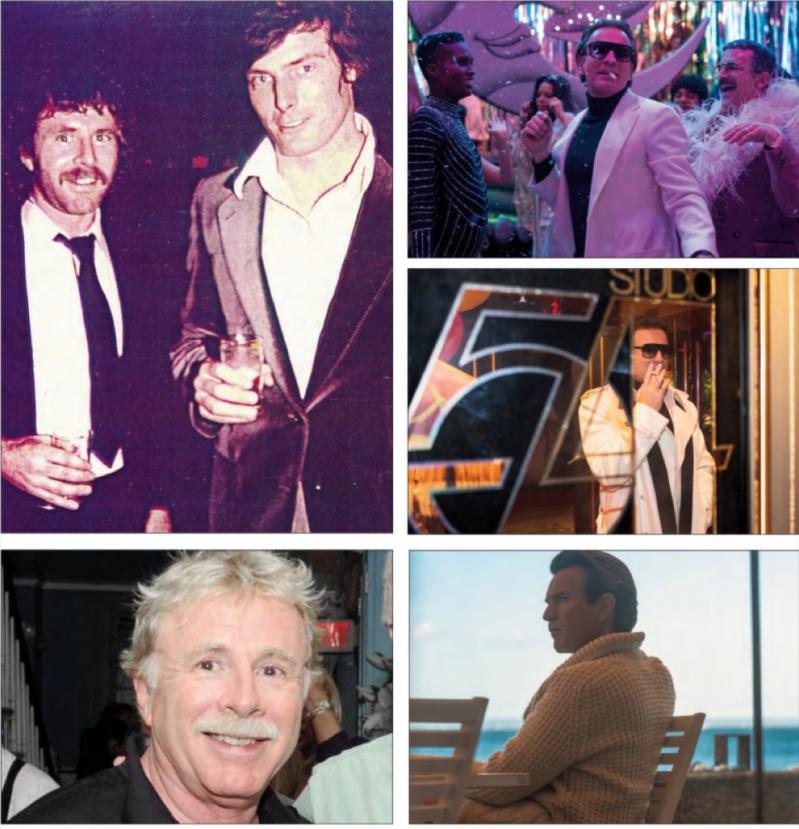 Steven Gaines, above left, and with Christopher Reeve, top left, had his own adventures at Studio 54 back in the day, in this case New Year's Eve 1978. The infamous nightclub was recreated in several scenes for the series "Halston," such as right top and center. Bottom right, Ewan McGregor, who plays Halston, in a scene replicating where the designer stayed in Montauk.
<I>Atsushi Nishijima/Netflix 2021 Photos<P>
By Jennifer Landes

For a man who describes himself as retired, Steven Gaines's name is showing up on some very high-profile projects.

Viewers of the "Halston" limited series, which Netflix released in May, may have noticed the Wainscott resident credited as the author of the 1991 book "Simply Halston," which the series used as its source material. Now, another of his infamous tell-alls, "Philistines at the Hedgerow," published in 1998, is being produced as a fictional narrative series.

The much earlier dates of the books give some sense of the odyssey involved on their way to the screen. "Simply Halston" was initially optioned in 2001 by Christine Vachon, head of Killer Films and the artistic director of Stony Brook University's M.F.A. program in film.

Why did it take so long to go from option to finished product, and with essentially the same team? According to Daniel Minahan, the director of the series, it was the struggle to contain the material in a traditional film format. He initially brought the book to Ms. Vachon, who became an executive producer of the series, but "we couldn't crack the story. In hindsight, it's too big a story to fit into a 90-minute movie," he said in an interview provided by Netflix.

In the interim, others attempted as well, with several actors reportedly interested in or considered for the lead. According to Mr. Gaines, these included Kevin Spacey, Brendan Fraser, Rupert Everett, and Alec Baldwin, who held the option on it, directly or indirectly, for some time. In 2016, that option expired and it reverted to Mr. Gaines. He took it back to Ms. Vachon, who sent him a check for $10 to renew her option. The check is now framed in his office.

Once they committed to a serial format, the story unlocked itself. Then, Ewan McGregor, whom Ms. Vachon had first worked with in Todd Haynes's "Velvet Goldmine," came aboard. As they were pitching the project, Mr. Minahan said a representative of Ryan Murphy Productions reached out to say that he loved the story and wanted to work on the show. Once Mr. Murphy (who has a production deal with Netflix) became involved, everything began to move very quickly.

The three decades from publication to series premiere were worth the wait for Mr. Gaines, who said recently he was thrilled with the result. "I was so shocked when I saw it. I thought it was it was so good. It was so raw."

The story follows the fashion designer from the 1960s to the 1980s as he builds his design house and brand to become synonymous with the style of that time. Concurrently, drug use, an extravagant lifestyle, and bad business decisions, including selling the rights to his name, set the stage for an inevitable implosion of his empire.

The series received mixed reviews, but even the less enthusiastic ones marveled at Mr. McGregor's transformation and the way the series painstakingly recreates the clothes, objects, and settings that help define the era. Mr. Gaines said seeing Mr. McGregor in that role "was amazing. He did a Meryl Streep, you know, he became that person. I walk around the house now in my bathrobe with a red scarf and a pan up in the air like it's a cigarette, pretending I'm him," he said with a laugh. "I've watched it too many times, I keep promising myself I won't watch it anymore."

One aspect of the book that Mr. Gaines thought the series distilled very well was the turning point, "where you realize that Halston is saying 'no' unreasonably, and then he's beginning to destroy himself."

In the book, he demonstrates it by quoting five people in a row, who all essentially say that Halston started to believe his own publicity. At this point, he was still using cocaine and was in a constant manic state. Mr. Gaines said the series illustrated that well in the boardroom scene where he is being shown different bottles for his perfume. "And he gets up and he's really grand and nasty. And he keeps on flipping them over, saying, 'No, no, no.' You can't behave that way in business. He just lost sight of who he was."

He pointed out one inaccuracy, that Halston did not own the house in Montauk featured in the series, but actually rented from Andy Warhol for many years. When they were out east, Mr. Gaines said, Victor Hugo, Halston's partner, would annoy him, so he rented him a house in Wainscott that was right behind Mr. Gaines's property.

It was near what was the old Swamp nightclub, "because he wanted to be close to the gay bar, so he could walk over there and buy cocaine and pick up guys and bring them back." At the time, Mr. Gaines knew who Hugo was, but had no idea he would interview him for Halston's biography some years later. "I had to pay him $10,000, and that was after he had already taken $100,000 from Halston not to talk to anyone."

The pleasure the series provided may have taken some of the old sting out of the initial reception to his book by members of the designer's family and the fashion world, who were not pleased by its publication. Mr. Gaines said Halston would have liked the book and the series in his own way, adding that one of the designer's aspirations was to be famous enough to be humiliated. "And I think that that's what this movie would do. I think that he would bask in all the attention it was getting, yet be humiliated."

Although he was credited as the source for "Halston," Mr. Gaines had no direct involvement with the series. That will change somewhat with "Philistines," which has already given him a role as executive producer. According to information gleaned from the internet, Warren Littlefield and Fox Searchlight are behind the project, which is being made for Apple TV. Mr. Gaines said he could not speak in any detail about the new series, but confirmed that Fox was making it and it would be only loosely based on the stories he featured in the book.

The characters will be familiar only as amalgams. According to Mr. Gaines, "there is a guy that owns the biggest house in the Hamptons, but it's not Ron Perelman or Ira Rennert . . . and there is a prominent farm family but it's not the Daytons or the Toppings or anything like that."

The storyline, envisioned over multiple seasons, would begin in 1955 with the artist community and run to the present. "It begins to tie the two stories together with a focus on how it becomes like it is today." The dramatizations will include people having affairs and neighbors arguing, but "they made their own construct out of it, and that's what it is so far."

Mr. Gaines will act more as a consultant and won't be involved in writing it. In fact, he is finished with any and all new projects in order to take a well-deserved rest -- well, sort of.

"I'm finishing a second memoir, which I had started, but I'm not entertaining writing another book or anything. I'm 75. And I don't want a deadline on my head or a nonfiction book where I have to fly to Duluth and interview 15 people. I just don't feel like doing that anymore."

Never saying never, however, he added that if something came up that wasn't too involved that he could do from East Hampton, he might consider it. "But in spirit anyway, I'm retired. . . . I'm not going to play golf, but I am going to have a good time in a place I love."