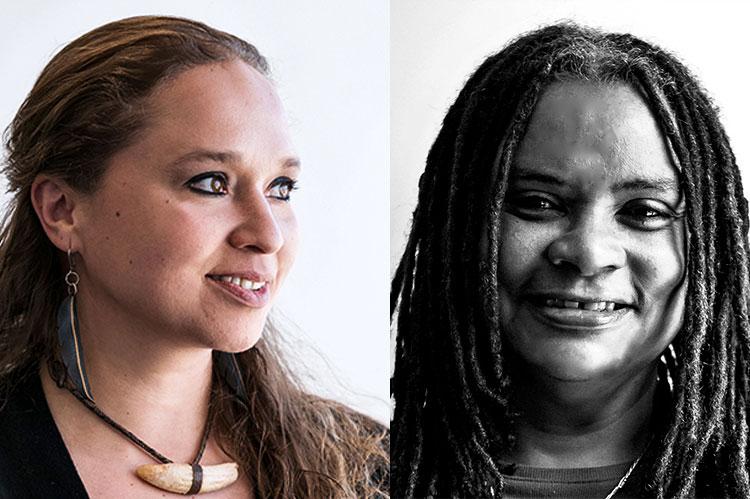 Courtney M. Leonard, a Shinnecock artist and filmmaker, and Donnamarie Barnes, the chairwoman of the Plain Sight Project and curator-archivist at Sylvester Manor, will be participants in "Gather" at Guild Hall
By Mark Segal

Guild Hall will present “Gather,” a series of four virtual conversations led by Black and indigenous leaders from Suffolk County, on four consecutive Mondays from 7 to 8:30 p.m. beginning this week. Devised specifically for community leaders, service workers, teachers, and developers, the sessions will take place over Zoom for an intimate group of 15 to 20 participants.

“Gather” builds new understandings, celebrating the East End’s diversity while acknowledging fault and colonization. Jeremy Dennis and Tela Troge, both of whom are members of the Shinnecock Indian Nation, will lead the first session, “On This Site.”

Ms. Troge, who is also a member of the Hassanamisco Nipmuc Nation in Massachusetts and an attorney, recently organized the Warriors of the Sunrise Sovereignty Camp in an effort to raise awareness of the plight of the Shinnecock people. Mr. Dennis is a fine-art photographer whose work explores indigenous identity, culture, and assimilation.

Courtney M. Leonard, a Shinnecock artist and filmmaker, will host “The Art of Water” on Feb. 1. Her current projects investigate and document the historical ties of indigenous communities to water, marine life, and native cultures of subsistence.

On Feb. 8, Donnamarie Barnes and David E. Rattray will discuss the Plain Sight Project, established to restore the stories of enslaved people, particularly on Long Island and across the Northeast, to their essential place in American history. Ms. Barnes is chairwoman of the project and curator-archivist of the Sylvester Manor Educational Farm on Shelter Island. Mr. Rattray is the founder of the project and the editor of The East Hampton Star.

The series will conclude on Feb. 15 with “Preservation and Community” with Georgette Grier-Kay, the inaugural executive director and chief curator of Eastville Community Historical Society of Sag Harbor and president of the Association of Suffolk Country Historical Societies. Ms. Grier-Key advocates for the preservation of Long Island history with an emphasis on African-American, Native American, and mixed-heritage historical reconstruction.

As of press time, Monday's program was sold out. Tickets for subsequent programs are $35 each and can be obtained from Guild Hall’s website.

Art as Ecosystem: Building Community
Art as Ecosystem, an ongoing series of discussions through the Guild Hall Academy of the Arts and The Church in Sag Harbor, will examine “Building Community Through Artist-led Transformative Spaces,” a Zoom conversation with Eric Fischl, Stephen Petronio, and Emily Simoness, on Sunday evening at 8.

Ms. Simoness is the founder and executive director of SPACE on Ryder Farm, a nonprofit residency program in Brewster, N.Y., that is an important center for the development of new plays.

Mr. Petronio, a choreographer, established the Petronio Residency Center in the Catskill Mountains as a retreat for choreographers to study, work, and experiment.

Mr. Fischl and April Gornik have transformed a former Methodist church in Sag Harbor into The Church, a cultural incubator that will combine a residency program with accommodations, studio space, exhibition galleries, and a library.

A link to register for the free talk is on Guild Hall’s website.