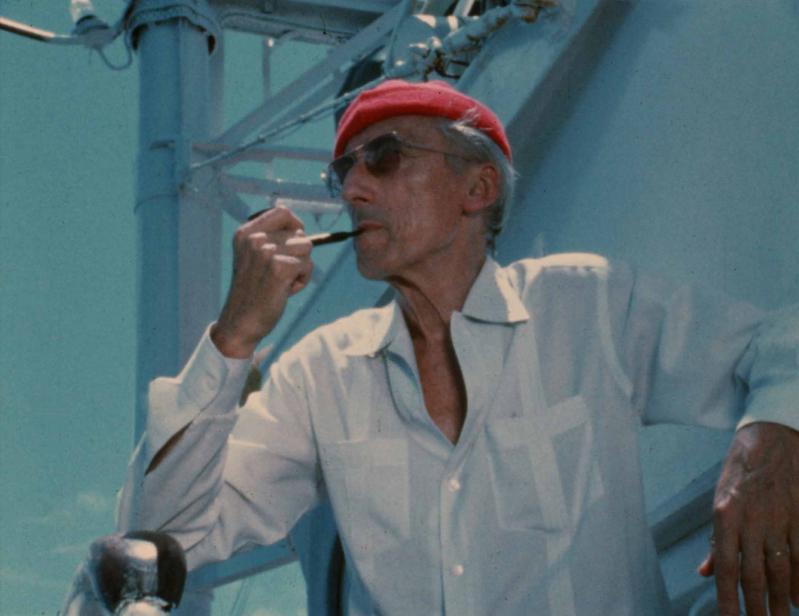 Jacques Cousteau contemplates his next adventure from the deck of the Calypso.
By Mark Segal

Seven years ago, while reading a book about the undersea world to her young son, the filmmaker Liz Garbus realized that the work of Jacques Cousteau, who'd been a big part of her own childhood and “inspired dreams of coming on board his ship the Calypso and having these adventures in nature,” was being lost to a new generation.

That moment was the genesis for her documentary “Becoming Cousteau,” to be shown on Sunday at Guild Hall during the Hamptons International Film Festival.

Cousteau’s worldwide fame derived in large part from the revolutionary underwater cinematography of his and Louis Malle’s Oscar-winning film “The Silent World” (1956) and his television series “The Undersea World of Jacques Cousteau” (1968-1976).

Ms. Garbus’s film draws upon a staggering abundance of archival material, much of it from the holdings of the Cousteau Society, to trace the arc of Cousteau’s life. In so doing, it reveals a fascinating and complex man.

“I always had an idea that there was going to be a treasure trove of footage because, as he said, he would be miserable when he wasn’t making a film.” She was right: There was copious footage of Cousteau being interviewed on television, as well as his writings, which are read by the actor Vincent Cassel. As a result, “It was really quite possible to tell the story largely using Cousteau’s own words as a spine, and being able to live in the visual world that he created.”

Cousteau insists at one point that he considers his films not documentaries, but “true adventure films.” In fact, were it not for a serious automobile accident while training to become a Navy pilot, he might eventually have found his adventures in outer space. Instead, choosing swimming as a means of recovery, he took up spearfishing and free diving, which led to a life on and in the water.

For Cousteau, necessity was often the mother of invention. In the 1930s, he adapted his camera for underwater use by inventing a waterproof housing for it. During the winter of 1942-43, Cousteau and the engineer Emile Gagnan invented the Aqua-Lung, the first self-contained underwater breathing apparatus (SCUBA) to achieve worldwide popularity and commercial success.

In 1951, he converted a World War II British minesweeper into the Calypso, the research vessel he used for his underwater adventures until it was damaged in 1996, a year before his death.

Ms. Garbus discovered much that she hadn’t known about her subject and his work before she undertook the project. “I had no idea that he had used oil money to finance his early work and excursions,” she said. Diving from the Calypso, his team worked for the Anglo-Persian Oil Company (today BP) and discovered the undersea oil that was responsible for Abu Dhabi’s wealth.

Cousteau admits he was naïve at the time, but he was struggling financially, and the money he made enabled him to buy radar, a sounder, and to fund future productions. After he realized that working for the oil industry was at odds with his growing environmental awareness, he turned to television instead.

It was the producer David Wolper who decided to take a chance on him, agreeing to make 12 episodes of “The Undersea World of Jacques Cousteau” for ABC after another network passed on the idea. In all, 36 shows aired, but as Cousteau’s despair over environmental recklessness increased, ABC eventually dropped him for being “too dark, too strident.”

By 1971, Cousteau had emerged as a committed environmentalist, testifying in Washington, D.C., that “we’re facing the destruction of the ocean by pollution and other causes.” He warned of global warming in 1989, initiated a petition that led to an agreement to protect Antarctica, and was the only private citizen to be photographed among more than 100 world leaders at the United Nations Earth Summit in 1992.

Cousteau married Simone Melchior in 1937. Ms. Garbus noted that because she did not like to appear on camera, her role on the Calypso was not well known outside the couple's inner circle.

Actually, Simone was so integral to life aboard the vessel that she was called “the shepherdess,” because “she kept the herd safe,” said Ms. Garbus. “I loved how she said, ‘I don’t have blood in my veins, I have salt water.’ Discovering Simone was a joy for me.”

The couple had two sons, Philippe and Jean-Michel, and one of Cousteau’s regrets was that his work took him away from them for long periods when they were growing up. Philippe eventually worked with his father, but died in a plane crash when he was 38.

“Just having led a fascinating life doesn’t always lead to an interesting documentary,” said Ms. Garbus, “but when I started to peel back the layers and get a sense of his evolution from an adventurer to a protective conservator and advocate, I realized that was a really interesting journey to explore.”

“I also think the story is one of this moment, and I hope that parents and children and folks in between will see it and talk about our responsibilities to this planet. It’s beyond the individual choice, it’s beyond whether we use a paper or plastic straw, it’s about putting pressure on nation-states to make saving our planet a priority.”

“Cousteau was sounding that alarm since the 1970s, and in 1992, when they met in Rio, he was optimistic, he felt it was a moment of change. We know now, almost 30 years later, that we still have so much more to do.”

“Becoming Cousteau” will be released in theaters across the country on Oct. 22 and become available for streaming later in the year. “I hope lots of people come to see it in in a theater first,” Ms. Garbus said, “because there’s all this gorgeous 35mm footage from the early moments of this kind of filmmaking under water, as well as much more recent beautiful footage.”