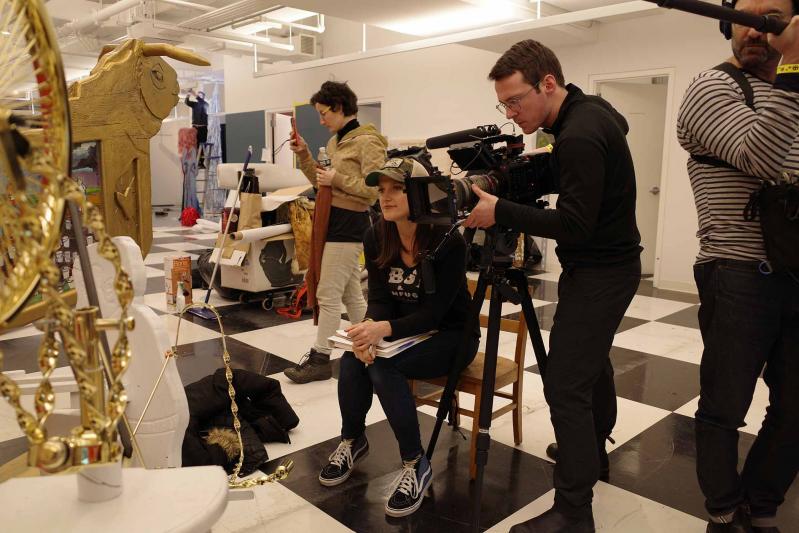 Kelcey Edwards, the director of “The Art of Making It,” at center, during the installation of the Spring/Break Art Show, which she captured for the film.
Matthew Heymann
By Jennifer Landes

Those who know Kelcey Edwards from her Iron Gate East gallery, a roving art space that popped up around Southampton in recent years, are usually surprised to find out that she's a filmmaker. The feeling is inverted for those who know her only from her production work.

Her latest project, "The Art of Making It," is a bridge between those two worlds. The documentary was shown on Sunday at a sold-out screening during the Hamptons International Film Festival and was announced as a DOC NYC selection yesterday. It turns the tables on recent films about the art market to focus on the supply side of the equation: the artists who are struggling to define and find success, while dealing with the commercial pressures of the contemporary art market.

Speaking by phone recently, she noted, "I have had two loves for my whole life, curation and filmmaking."

Although she never took a class in college, she decided to start making films right after graduating from the University of Texas in 2001. She learned the craft at Austin Filmworks during the time of Mumblecore, low-budget independent films that focused on people in their 20s and 30s talking about their lives and relationships. She was steeped in it, writing short narrative scripts and using Robert Rodriguez's book "Rebel Without a Crew," about his guerrilla filmmaking strategies, as her bible just as everyone she knew was doing then.

In 2003, she opened a gallery in East Austin called Iron Gate Studios and began filming artists there, using the equipment she stored in the space. "I just loved filming them setting up or interviewing them about their work or shows."

She enrolled in Stanford University's documentary program in 2006. To apply, she sent them the art and artists footage, not having a complete documentary to show them. "I had a short narrative film at South by Southwest [SXSW] and I positioned it as 'I want to get into this, and here's the kind of work I do.' "

The program takes eight applicants every year. As part of the introductions, each student offered a different issue of concern, such as the environment, social justice, or gay rights. When it was her turn, Ms. Edwards said, "I think I'm the art film girl."

She worked on her first feature documentary with the director Kristy Guevara-Flanagan, who is now a professor at U.C.L.A. "Wonder Women! The Untold Story of American Superheroines" played at the 2013 SXSW Film Festival and was nominated for an audience award there, going on to win that award at the Outflix Film Festival in 2015, among other distinctions.

By 2017, she was organizing exhibitions on the South Fork with Iron Gate East, after taking some time to get married, have twins, and move to Quogue from New York City. She participated in the Spring Break Art Show in Manhattan earlier this month with a show called "Dormant."

She was there in 2019 as well, but in 2020 she was using it as one of her new film's locations. "What's amazing to me about what they do, and all these art fairs actually, is that they sort of build this city in a day. You just see how they take these spaces that have nothing and completely transform them."

Having been there the year before, "I was kind of starry-eyed about it. . . . I thought it would be really fun to show a general audience what it feels like to pull off something of this magnitude." New York Art Week was in early March of 2020, during the last moments of the art world's "before times."

The movie (which she describes as a collaborative project indebted to the entire team of producers, cinematographer, editors, composer, and animator) starts off as the familiar "entertaining romp through the art world," or an "air-kissing carnival," as one of her producer friends aptly described it. But, "We knew we were going to do something of a critique" of the underlying issues in this superficially convivial circus.

There are interviews with "luminaries and insiders," but also what she and the producer Debi Wisch and the co-producer Allison Berg referred to internally as the "disruptors and visionaries," people like Dave Hickey, Helen Molesworth, and Stefan Simchowitz ("The Art World's Patron Satan," as per The New York Times). They're "people who speak truth to power, outspoken critics," Ms. Edwards said.

Their interviews dissect the art world at a time when its problems felt entrenched. Then Covid hit and became the ultimate disruptor. "It was really a powerful time to be there, because we got to capture that transformation in real time." Headlines like "The End of the Art World as We Know It" blared from the art press in their last days of filming. Although they were ready to start editing what they had, "we couldn't stop storytelling" and kept going.

The film's true stars are the artists, a curated cross section of ethnicities and genders from a variety of geographic regions, each with compelling experiences to relate. "I wanted to make sure that we were casting for certain types of diversity. If we're making a film about this collective moment that's really a cultural story about the state of things in America, I needed to make sure that our core artists presented some kind of range."

She started with Jenna Gribbon, whose work she first saw at her Hunter College M.F.A. show. "There's something about her, she kind of wears her feelings on her skin."

Next was Chris Watts, whom she met via a connection at the Parrish Art Museum's Contemporaries Circle. "I was talking about my interest in the experiences artists had coming out of grad school and she said, 'Oh, I have a friend you have to meet. He has this crazy story.' I met Chris, and same thing, he stole my heart." Some of the other artists featured are Gisela McDaniel, Almond Zigmund, Felipe Baeza, Andrea Bowers, and Lisa Corinne Davis.

She wanted to show artists as real people. A key goal was "to get more people, who are not in that kind of insular part of the art world, interested in living artists."

"I got so much inspiration from the artists that we met making the film, and how a lot of their work is really about shining a clear, true light on some of the most heartbreaking issues we contend with."

Still waiting for distribution, "we're just excited about having it finished and giving people a chance to meet these stories and these characters. . . . My end game is I want as many people as possible to watch the film." There is plenty to keep the cognoscenti amused -- inside jokes and the like -- but it is intended to be a conversation starter.

"We're saying, let's get all these voices around the table, lay out these dichotomies, ask some questions, and encourage more people to think in a focused way about them and talk to one another about them."

Long before they finished, Ms. Edwards knew "without a doubt" what the last line of the film was going to be. Mr. Watts says, "Maybe this isn't the end. Maybe it's the beginning of everything." She said that has been how it has felt, "like a major, major shakeup that's still going on, but one that will lead to rebirth."

DOC NYC will take place from Nov. 10 to 18 at the IFC Center, the SVA Theatre, and Cinepolis Chelsea in Manhattan, with tickets and a full schedule on its website.