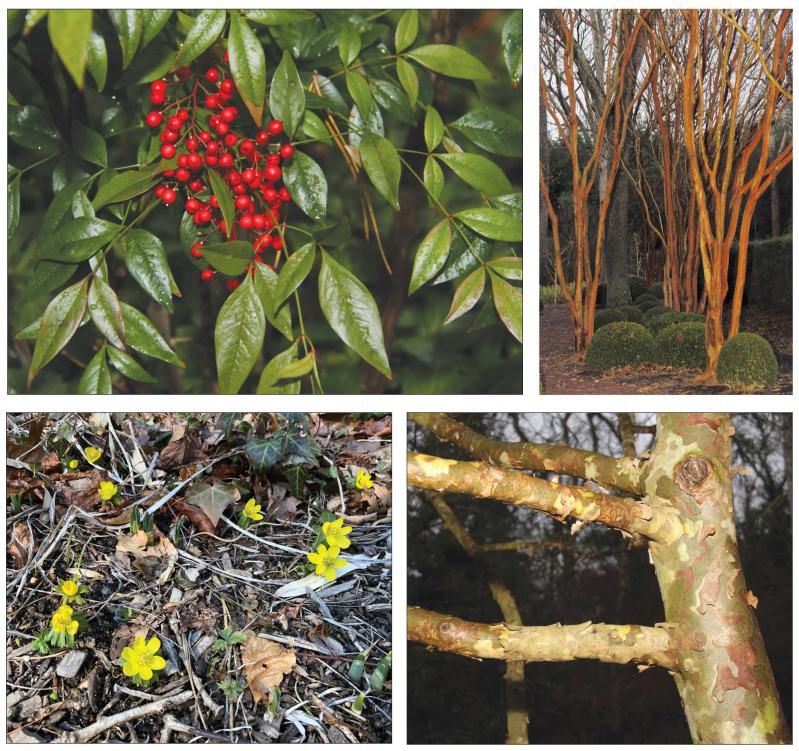 There are a number of trees and plants that provide interest to the garden in winter, including, clockwise from top left, heavenly bamboo, crape myrtle, Bloodgood London planetree, and winter aconites.
Durell Godfrey and Holger Winenga Photos
By Jennifer Landes

By the time this is published, it is likely that the lighted trees placed in every South Fork downtown for Christmas will be gone, and with them the last bit of color and brightness that we associate with winter. Year-round residents may already be shoring themselves up, knowing that dark and desolate days will now fully be upon us.

Not so fast, says Holger Winenga, the horticulturist at LongHouse Reserve in East Hampton. Winter, he said, can be a great time to work in the garden and appreciate the plants that offer some color and scent in what is usually the dullest of times outdoors. There is beauty to the winter garden, even if it is a minimalist kind.

Just as some late-blooming witch hazel shrubs are winding down, early blooming varieties are gearing up, offering color and even scent through the winter. In some places, the plants are referred to as winterbloom.

“The early witch hazels are already budding and waiting for maybe February,” he said. "Around the same time the winter aconites will bloom, then snowdrops, crocuses, daffodils. After that, it is easy to have a whole cycle in bloom.”

Mr. Winenga recommends planting a fragrant witch hazel someplace you are likely to pass by often, such as a path to the car from the house. In addition, a “good garden should have a minimum amount of evergreens as a background in a strategic spot.” This will provide structure even as other plants drop leaves, he said.

Other sources of his winter interest are the form and bark of trees, which can change in appearance and color. Along with the paper bark maple, “some of the crape myrtles have exfoliating bark at maturity. They get a nice cinnamon color.” Stewartia pseudocamellia “gets a camouflage look in different colors when they mature that looks very interesting,” as does lacebark pine. 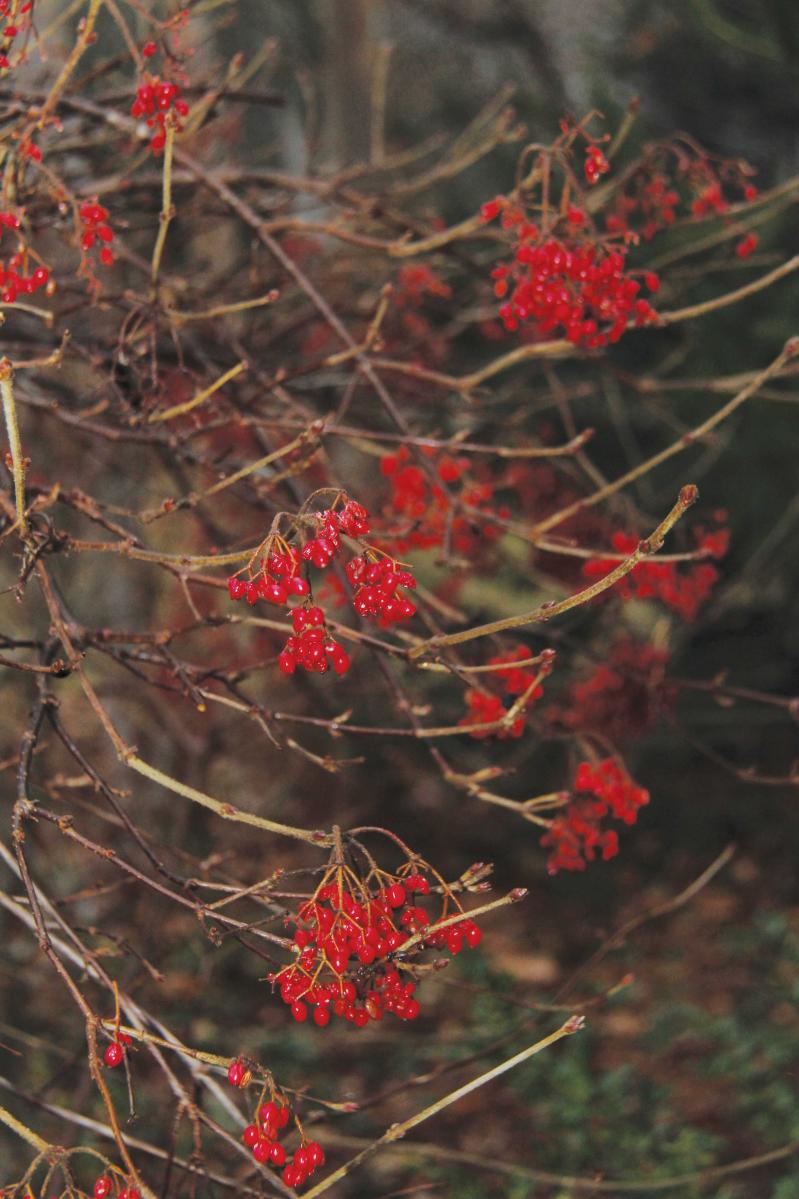 Lichen growth on bark in the winter months can also provide a certain appeal and does not seem to be harmful to the host plants. “It gives trees a more silverish green appearance,” he noted.

Mr. Winenga, who was born in Germany, came here in 1990 with a background in garden design but not much interest. After arriving in the Hamptons in his mid-20s he caught the family bug. His great-uncle was a famous hybridizer of perennials and his father was a well-known landscape architect in Germany. After an early apprenticeship at a plant nursery that was known for its hybridizing, he had installed small gardens, but “never a complete landscape or garden installation from beginning to end.”

Around 1993, he started his own nursery here called Garden Treasures, which specialized in ornamental grasses and unusual perennials. “I’m really a perennial person, that’s my specialty, hardy perennials and ornamental grasses.” Before joining LongHouse, he was part of many garden installations, including quite a few with the landscape architecture firm Oehme, van Sweden, and they still work together on some projects.

“It was very exciting, with a lot of creativity,” Mr. Winenga recalled. He liked finding plants that would do well in the local climate and introducing new plants from Europe and all over the world. That is how he came to know Jack Lenor Larsen, the founder of LongHouse and an early customer. In 2010, he asked Mr. Winenga to install the ornamental grass gardens there. “It needs some restoration now, but it makes me very happy to have that old connection to LongHouse.”

When he first came here, the winters were still very quiet. His first client had a pool border, and it had to be in bloom from Memorial Day to Labor Day and that was all. “Sept. 11 really changed everything. People were now here for the whole year.” People want their gardens to bloom earlier, but they may have been planted with only the late spring and summer months in mind.

When Mr. Winenga started at LongHouse last March, one of his first ideas was to make the gardens a more year-round destination. While the gardens are closed to the public from December to when the daffodils start blooming, they are open by appointment. Even putting the sculpture aside, there is a lot to see and — for the gardener — to do. He would like to encourage off-season appreciation of the grounds with tours and events that would take place outside the usual calendar.

Winter chores can involve chopping up raked leaves to place in a thin layer on beds. “It is a perfect time for pruning to see the structure of shrubs and correct mistakes from the prior year and really see how they can be beautified.” It’s a time to plan, to consult the catalogs, and order plants and seeds for spring.

LongHouse has 16 acres of gardens. “There’s a lot to think of in terms of design,” he said. “It’s the perfect time to think about it before it gets too busy in the spring.”

Over the years, he has increasingly thought about the late and early blooming plants and how to make gardens more appealing year round. “The winter here is so gloomy. It makes it a lot easier to get through it if you can’t get away.”

The following are Holger Winenga's recommended plants to enhance a garden in the winter and early spring. Latin names precede the common names.

To avoid disappointment with spoiled Camellia flowers in the coldest winter weather here, Mr. Winenga said that Abby Jane Brody has suggested choosing varieties that bloom in early fall or late spring when ordering from catalogs.