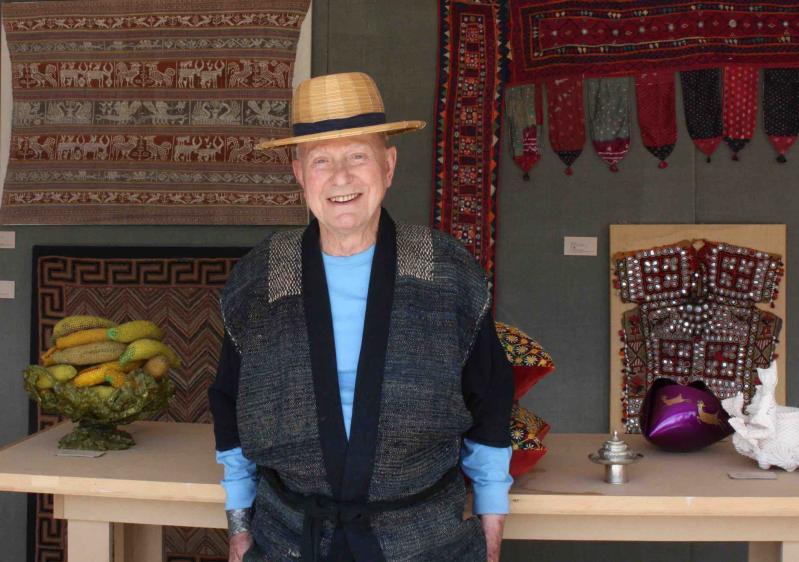 Less than a year after Jack Lenor Larsen's passing, there have been shakeups and bad feelings between board members and some of the donors and staff of the LongHouse Reserve in East Hampton, which Larsen founded and intended to be his legacy.

The abrupt dismissal of LongHouse's longtime executive director and a change to Larsen's will during the last weeks of his life have sparked controversy and some acrimony between two groups of insiders and longtime friends of Larsen who believe they know and have his best intentions at heart. Those who spoke up this week against the board's management in recent months said Larsen's vision was rooted in the East Hampton community and what had become "the LongHouse family" over the years. They worry that the board's vision is for something much grander in scope, or worse, that the institution could be brought down by mismanagement.

At the core of their concern was the firing of LongHouse's executive director, Matko Tomicic. After 26 years with the organization, he was treated "like a criminal" when he was let go, according to several people familiar with the matter. He was fired on Sept. 4. An interim director, Carrie Rebora Barratt, started this week.

This week, longtime and significant donors such as Jane Johnson and Anne Roos, shared letters they wrote to the board. They described the board as being opaque in its actions and communications with those who expressed concerns about Mr. Tomicic's firing and other issues. Ms. Johnson has also written a letter to the editor this week. She said these letters are only a fraction of the outpouring of concern from the more than 50 donors she has been in contact with, who are worried about how their gifts will be used.

The donors and others are also troubled by the late rewriting of Larsen's will. Ms. Johnson said her understanding is that the new will may have cost LongHouse some $3 million in funds that Larsen had intended for it. The attorney who helped draft the first will would not comment. An attempt to reach the attorney on the second will was unsuccessful. The donors have copies of the two wills along with the LongHouse constitution and bylaws, which they believe the board has violated. Ms. Johnson said they have a form for a complaint to the New York State attorney general's office and are ready to proceed in filing it.

The firing also prompted the resignation of Alex Feleppa, who was chairman of LongHouse's garden committee, on Monday. Mr. Feleppa was previously on staff as horticulturalist and worked closely with Larsen for four years on the design of the gardens. In his resignation letter to the board, he wrote "I feel that you have no true sense of the community created and fostered by Matko over the last 26 years. Jack and Matko put their trust in us as the local community to help realize Jack's vision."

On Tuesday, he said in an interview that he was told that Mr. Tomicic was sent off the property and not even allowed to go to his desk to retrieve a note from Larsen from 2019 that he had posted there and looked at every day. In the note, Larsen acknowledged that they had built LongHouse together and thanked Mr. Tomicic for that. "It's the coldness that I think ultimately is most hurtful and most un-Jack," Mr. Feleppa said. Although he did not speak for other garden committee members in his resignation letter, he said members had voiced similar feelings to him.

Reached by phone on Tuesday, Mr. Tomicic said he could not comment on the matter. He was headed to Croatia to visit his family, after a two-year hiatus brought on by the Covid-19 pandemic.

In a Sept. 28 letter to the board, which has not been answered, Ms. Johnson requested a meeting to learn more about the board's plans. "We need to feel comfortable about the smooth transfer from founder-management to board management," she wrote. In a follow-up conversation, she said some of the questions are related to protecting the site and Larsen's personal property, with some even fearing that the LongHouse organization could be dissolved. "What is the financial plan, the future programming, the new direction?"

In a letter to the board informing the members that she was taking LongHouse out of her will, Ms. Roos, who described herself as a fifth-generation summer resident of Montauk, said, "Matko has been a popular and effective executive who is highly regarded by the community. I do expect a clear and honest explanation of why you and the board feel he is incapable of taking LongHouse Reserve into the future."

A statement from Nina Gillman, who is co-president of LongHouse with Dianne Benson, commended Mr. Tomicic, describing the institution as in "an important phase of transition." In addition to highlighting Ms. Barratt's background as a deputy director of the Metropolitan Museum of Art and president and chief executive officer of the New York Botanical Gardens, she said the board has commissioned a strategic plan to be released soon.

In response to a similar statement made in a letter she received from the co-presidents describing Ms. Barratt and her qualifications, Ms. Roos wrote to the board that the organization might have been better served with Ms. Barratt as "the perfect consultant to call on, as needed, to add even more luster to the LongHouse experience," guiding visioning and fund-raising. "I have served on many boards and that is how the process can work out well," she wrote to them. "With an imaginative and devoted director who worked hand in hand to carry out Jack Lenor Larsen's dreams for LongHouse, there was a time when you held a winning hand. It is not even clear that Carrie Barratt ever met Jack Larsen, much less discussed the future of his generous gift with him."

According to Ms. Benson, who was reached by phone on Monday, Larsen always intended to have the property and its mission evolve. "LongHouse was a very powerful product of the 20th century and Jack was a very dominant leader of that 20th century. Now, we're in the 21st century and it's a new time."

Although she and Mr. Tomicic were known to clash at times, she described him as "a fantastic person, one of my favorite people in the whole world." Larsen's death, however, "created a lot of deep thinking about LongHouse and what it means to the community and what it is and how we go forward and keep it as alive and vibrant, and as all-encompassing as it has always been, and not necessarily just stay the same. So, I think that's the whole thing, basically."

Having worked for nonprofits in New York, Mr. Feleppa said that both were justified in their roles. "Dianne, as the president of the board was the creative sort of dreamer in her own right, and in her adoration of Jack. Matko, being the executive director, was much more of the realist and ultimately, probably much more of the cynic." Looking back, he noted that the two would have their moments, but "that's kind of the checks and balances that happen in a nonprofit organization."

"I personally had conversations with Jack, when he was well, about entrusting the future to Matko," Ms. Johnson said. "Who knows the operation better? Who has steered us through the pandemic, raised more money with his always personal touch, and encouraged more visitors this past year in spite of Covid restrictions." She added that at previous board meetings he was praised and given bonuses.

"By firing Matko in the name of moving into the future, the board has jeopardized the well-being of the foundation and all so soon after Jack's passing. . . . Expenses have been accrued for no good reason. Protocols have not been followed and the board bylaws disregarded. Where is the loyalty to the founder?"

In his resignation letter, Mr. Feleppa wrote, "It saddens me terribly to feel that the place that we made a local sanctuary and cultural center is turning into a cold institution driven by ego, status, and self-praise. I do not feel my voice will be heard under such 'leadership.' "