An ‘Unstill’ Year for Gabrielle Selz 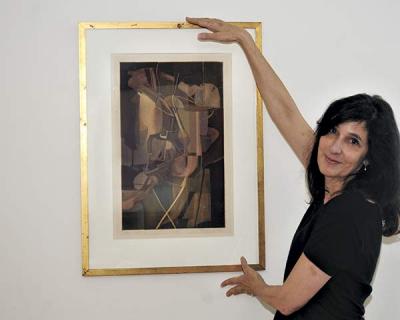 Gabrielle Selz with “Le Mariee,” a collaborative 1934 aquatint by Marcel Duchamp and Jacques Villon that was a graduation present from her mother
Morgan McGivern
“Unstill Life” chronicles Peter Selz’s career
By
Mark Segal

It has been almost a year since the publication of “Unstill Life: A Daughter’s Memoir of Art and Love in the Age of Abstraction,” Gabrielle Selz’s book about her parents and the art world in which they held such a prominent place.

Indeed, her father, Peter Selz, is still active at 96, having recently organized exhibitions at the de Saisset Museum at Santa Clara University and the Pasadena Museum of California Art.

“He’s slowing down physically,” Ms. Selz said during a recent visit to the Southampton house she shares with her son, Theo, a senior at Southampton High School. “But he’s still working, and he goes out a lot, to the movies, to dinner. He has been to many of my readings in the Bay Area. When I did City Lights, there was a whole row of his old girlfriends in the front row.” Her father and Lawrence Ferlinghetti, the proprietor of the legendary San Francisco bookstore, are both in their 90s and have the same birthday, so they celebrate each milestone together.

The past year has been a busy one for Ms. Selz, and it will culminate next Thursday at the Roosevelt Hotel in Manhattan, where she will receive the American Society of Journalists and Authors award for the best memoir or biography of 2015.

Though she has written for The New Yorker, More magazine, The New York Times, and Huffington Post, among many others, “Unstill Life” is her first book. “Touring was exhausting,” she said, “in part because I was trying to coordinate my book tour with looking at colleges with my son, but it didn’t work out.”

One reading at the Norton Museum in Palm Beach, Fla., drew 300 people. At another, three people showed up — “and one was homeless. I learned it’s best to go someplace where there’s a built-in audience, such as a book festival, or someplace where you know people.”

Ms. Selz was born in Claremont, Calif. Both her parents, Peter and Thalia Selz, were teaching at Pomona College there, and her father was running an art gallery. Immediately after her birth, he was appointed chief curator of painting and sculpture at the Museum of Modern Art, and a move to Central Park West soon followed.

“Unstill Life” chronicles Mr. Selz’s career, which led in 1965, seven years after taking the MoMA position, to Berkeley, Calif., where he was founder and director of the University Art Museum. It details his connections with the most important artists of his time and plumbs his relationship with the author’s mother, which persisted for more than 40 years after their divorce and all through his four subsequent marriages.

“My father loved the book,” Ms. Selz said. “It reveals a lot, but nothing he never really talked about. He had been badgering me to let him read it, but I only gave in when it was about to go to galleys.” He came to Southampton and sat at her dining room table with a yellow legal pad and pencil while reading the manuscript.

“I was upstairs waiting, and I was really nervous. Would he hate me? Would he never speak to me again? He came up with tears in his eyes and said it made him cry.”

He suggested only a few art-historical corrections.

Ms. Selz majored in art history at the University of California, Santa Cruz, and earned an M.F.A. in writing from City College of New York. For a time she worked in commercial television and on the political campaigns of Michael Dukakis and Paul Tsongas. Speaking of her 20s, she said, “I did a lot of floundering. I even tried making art. It wasn’t until my early 30s that I knew I wanted to write.”

At that time, she completed a draft for a novel and found an agent, who sent the manuscript to five people before giving up on it. “I put the novel aside. But by writing the novel I did learn how to go into the maze of writing a book, and find a way out.”

But it was a difficult chapter in her life. Her mother was diagnosed with Alzheimer’s disease, and she herself was in the middle of a divorce. She began to write personal essays and became involved with live storytelling. “The first time I did an event at the Moth,” a prominent approach to storytelling with venues coast to coast, “I was the first person up and there were 300 people in the audience. I was so terrified.” She eventually won a Moth story slam.

She also wrote a short piece for More magazine about her father coming east to say goodbye to her mother. While going through her mother’s art collection together, they found audiotapes and journals in her attic; her mother had intended to write a memoir about the art world.

“That opened the window and led to writing the book. It was really powerful to hear them talking about their life, because they hadn’t been together since I was a little child and I hadn’t had access to them as a unit. I also felt like my mom hadn’t been able to do this, so it was bequeathed to me. The whole process of writing the book and talking with my father opened up so much for me.”

Among the artworks she inherited from her mother is a 16th-century pen-and-ink drawing of the Madonna and Child by Annibale Carracci. “My dad bought it for my mother when she got pregnant, so it’s very special.” Another work hanging in her dining room is “Le Mariee,” a 1934 aquatint that was a collaboration between Marcel Duchamp and Jacques Villon, his brother. Villon made the print of Duchamp’s bride, and Duchamp painted it.

At the moment Ms. Selz is writing short pieces while getting her son ready for college, but she has several ideas for books she might undertake once he is settled in September at the University of Redlands in Southern California. “I have an idea for a biography of an artist, whom I don’t want to name, and I have several ideas for novels. I think I’m a storyteller at heart.”

She is a bit apprehensive about starting another novel. “I’m terrified of it, which is probably why I should do it. When you write a memoir, you know the plot. You still have to find the arc of the story, but it’s not the same as a totally blank canvas.”

Ms. Selz has lived in Southampton for 18 years, but she will be moving to Berkeley in August. “I’m going to miss the art community out here,” she said. “It’s small enough that when you go to an opening or event, you see everybody you know. But my dad’s out there, my stepsisters — and this batch I really like — and I want to spend the few years he has left with him. There’s a lot of stuff to untangle. And Theo and I will at least be in the same state.”