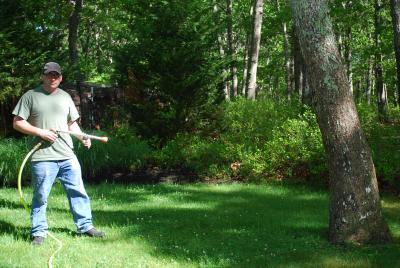 What despises sunlight and garlic and feasts on meals of blood? The ghoulish and ubiquitous tick, and Brian Kelly of East End Tick Control, which has been in business for 15 years, is the area’s own personal Van Helsing.

May is National Tick Awareness Month, and even as it draws to a close, the little parasites are kicking into high gear, according to Mr. Kelly. “It’s definitely worse after the mild winter,” he said. “In the last five or six years, the ticks have become really bad. It’s a constant, uphill battle.”

In the old days, there seemed to be only big brown dog ticks around. But then deer ticks rode into town — on deer, of course — and brought the rampant Lyme disease, which last year infected over 2,500 New Yorkers.

If not treated quickly, Lyme leads to a host of nasty ailments, starting with flu-like symptoms and progressing to paralysis and heart disorders, with many other ailments in between. The deer-tick nymph, which transmits Lyme disease, is microscopic in size and hard to find. People infected with Lyme sometimes develop a bull’s-eye-shaped rash around the site early on. But here’s the thing of it: Sometimes they don’t. That’s when the disease can progress and become more difficult to treat.

Other ailments include human monocytic ehrlichiosis, with symptoms similar to Lyme. There is also babesiosis, a malaria-like disease spread by ticks. And only recently has the medical profession discovered that a tick’s saliva can cause an allergy to red meat, which may have gone undiagnosed for years.

Now there’s a new bloodsucker to worry about, the Lone Star tick, which earned that designation by the small white dot on the female’s back. “It was discovered in Montauk a few years ago, and that’s the only place it was found around here,” Mr. Kelly said. “Now it’s in Southampton, Moriches — it’s unbelievable. They’re outnumbering the deer ticks.”

The East End Tick Control Web site, which offers a woozy-making slide show of embedded and engorged ticks in various states of blood lust, features a “real-time tick risk-assessment” chart. The risk right now is high, since May is the time when adult ticks are “questing for a blood meal before laying their eggs.”

Mr. Kelly’s company is the only firm of its kind, although many landscapers and exterminators now offer tick control services as an add-on. It’s not the same, he said. “They’ll say, ‘We do ticks,’ but they don’t have the same knowledge of where the ticks are. You can’t just spray the lawn. Ninety percent of the ticks are elsewhere on the property.”

Although the products used by East End Tick Control are environmentally friendly, many of Mr. Kelly’s customers have been requesting an organic alternative. “It’s hard,” he said. “The organics just don’t work as well as the synthetics. But we’re trying.” In fact, he has been manufacturing a new product, called Tick Guard, which features a proprietary blend of natural oils. “The early tests are looking very good,” he said. Some organic oils that have worked, for ticks and mosquitoes, include peppermint and garlic. “They really hate the garlic,” said Mr. Kelly.

Another new treatment, called the fourposter, is being tested on Shelter Island. Mr. Kelly described the deer-feeding stations in the pilot program. “When the deer goes to eat the corn, there are these rollers, like paint rollers, on either side of the bucket, and they spread a substance on the deer’s neck,” he said. “It’s like Frontline, but for a deer.”

Surprisingly, Mr. Kelly himself has never had Lyme disease, so prevalent on the East End. “I get tested every year,” he said.

He recommends common sense to keep ticks at bay. “Keep your yard nice and clean,” he advised. “It makes a tremendous difference to keep the grass cut short and let the sunlight hit the yard.”

Sunlight and garlic oil being used to control ticks? Can tiny wooden stakes be far behind?