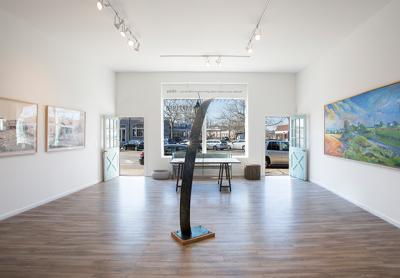 Works inspired by nature are featured in “Terra,” a group show on view at ArtUnprimed in Sag Harbor through Sunday.
Olga Goworek
The project of Casey Dalene of East Hampton and her website ArtUnprimed
By
Jennifer Landes

In a delightful trend, the South Fork’s wintertime shop vacancies have given way to vibrant art spaces run by dealers previously found only on the web. That this may continue into the spring and encourage more of the same next year is a hopeful sign as we stare down another summer of impossibly high rents, dinner checks, and farmstand tomato prices.

One of these homegrown galleries has popped up in Sag Harbor for the past few weeks and will close its doors soon. The project of Casey Dalene of East Hampton and her website artUNPRIMED, it is on view in the Main Street store occupied by Addo in the summer. Addo’s owner, Ms. Dalene explained, has a cooperative agreement with the designers whose work is sold there; any inventory goes back to them at summer’s end. The owner and the gallerist cooperated to open the space as a winter gallery, and the experiment has worked beautifully. The space is wide and deep and offers enough room and light for even large pieces to breathe.

For her first exhibition, Ms. Dalene chose the theme of “Water.” She followed up with “Women,” and now tackles “Terra,” a show focused on art that addresses the idea of the earth, or actual aspects.

Landscape is handled monumentally with large pieces by Scott Bluedorn and Bruce Lieberman, each of whom has his own take on representational art. In Mr. Lieberman’s hands, it is bold and loose, with a slightly interpretative approach to color. His massive East End landscape, incorporating a road bisecting farms and fields with a 10-story sky of dusky clouds, is both intensely real and subtly surreal. On second look, the colors look unnatural but still recognizable — an early summer day with an ultraviolet sky and earth glowing with absorbed sunlight.

The saturated color on that wall is balanced by the cool restraint of Mr. Bluedorn, whose pen-and-ink drawings on paper and canvas have the precision of photorealism. The show has on display two works from his “Forbidden Island” series: “The Ruins” and “Gardiner’s Island.”

These works lose nothing of the power they had when first shown at the Parrish Art Museum’s “Radical Seafaring” exhibition last summer. “The Ruins” captures the topography of Gardiner’s Point, a part of Gardiner’s Island that broke off from the mainland during a 19th-century storm. It was also the site of a lighthouse and a military fort. Because its buildings have mostly succumbed to nature and crumbled, it is now known as the Ruins. The image captures a rocky promontory, with a base of one of the former structures somewhat evident. “Gardiner’s Island” has a surreal quality, a melding of the island’s natural elements, its manmade structures in the form of a windmill, and the ospreys that have taken refuge there.

Mr. Bluedorn’s ink drawing is also incorporated into the work of Will Ryan, part of a series of collaborations Mr. Ryan has undertaken with other artists. On a wide section of raw, unstretched canvas, Mr. Ryan’s big sweeping brushstrokes of purple oil are embellished with Mr. Bluedorn’s various seacraft, which are tossed and dashed in what the two artists recognized as a “Tempest” and named it so.

Mr. Ryan also worked with Dennis Leri on a nearby sculpture, “Spontaneous Convergence,” that captures some of the same energy of the canvas in a very minimal visual language.

Another artist taking a minimal approach is Michele Dragonetti, whose photographs of boat prows look more like arrangements of forms and colors or geometric abstractions than actual objects. She gives them names, perhaps their actual names, though it is more fun to think of them as fanciful.

Jane Martin takes this kind of abstracting tendency to the next level with her photographs of sand in Australia. With a slight pixilation, they look like abstract paintings or other natural elements, such as feathers or fur.

Charles Ly’s densely layered paintings and drawings use natural objects as compositional elements to create patterns more associated with abstraction. In “Watermelon Inception," he makes a painting look like a collage, densely populating it with fern-like fronds on a pinkish background. The work’s foreground is so thick with them that they act as a wall barring entry into the canvas.­

The show includes techniques and mediums not typically part of the mainstream of art making. Peter Spacek works in scrimshaw on surfboards and other surfaces. His intricate patterns are all the more striking because the incisions can only be fully detected once the ink is applied and the time to correct errors has passed. Traute Worschech’s silk fabric paintings represent cellular life and other biological forms. A viewer might see flowers, leaves, or even a rock wall.

Dalton Portella and Mica Marder round out the thematic elements of the show. Mr. Portella has a sea-inspired abstract painting. Mr. Marder contributes both a fish-shaped drawing and sculpture of found objects, and a floor sculpture.

There is actually a lot more in the space, on shelves, and in nooks that either continue the exhibition or offer other subjects from the participating artists. It sounds eclectic, and it is, but because each object relates in some way to some other in the room it never seems out of control.

Ms. Dalene has been so successful in filling the space with thematic artwork by East End artists that it will be exciting to see where her follow-up act takes her, in a space yet to be announced. In the meantime, this exhibition continues on view through Sunday.