A Tale of Two Princesses 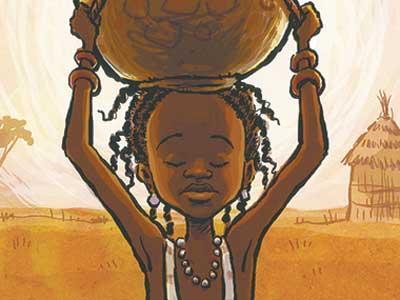 Look what wonders a change of scenery can bring. For her latest children’s book, Susan Verde of East Hampton has left behind art museums, yoga, leisurely bicycle rides, budding friendship among felines, and every other conceivable bourgeois nicety for the desert sands and dirt-floor huts of West Africa.

In “The Water Princess” (G.P. Putnam’s Sons, $17.99), she tells the story of the fashion model Georgie Badiel’s childhood, dominated by daily trips with her mother to a distant well for water for drinking, cooking, and washing. Gie Gie imagines herself a kind of sorceress with powers over the natural world — the swirling winds, the tall grass, the wild dogs. But not the water. That she cannot conjure or entice closer. Pot on head, she must walk.

Relayed simply, even beautifully, before sunrise every morning mother and daughter begin their trek, one not without its pleasures, what with the singing, a stop for a snack of shea nuts under the spread of a karite tree, a brief frolic with other children at the well. But still Gie Gie dreams nightly of a day when the water will not only be plentiful and readily at hand, but free of befouling mud.

All this is illustrated by Peter H. Reynolds in broad swaths of ochre and shades of rich purple for the evening sky. The watercolors fill every square inch of every page. Good luck finding a more eye-pleasing picture book this year.

The lessons for spoiled North American children are self-evident, but the book also gets across the idea of helping others in far-off places — through the Georgie Badiel Foundation, for instance, which works to bring clean water to the people of Burkina Faso.

Back in the States, the stakes may be lower, to put it mildly, the hum of the earth distant and all but drowned out, and yet a girl can still make a difference and have a good time doing it.

Gerry, the sprightly, tiara-wearing heroine of the “Very Fairy Princess” books by Julie Andrews and her daughter Emma Walton Hamilton of Sag Harbor, and illustrated by Christine Davenier, is back in “Attitude of Gratitude” (Little, Brown, $17.99). Once again we see our schools gamely trying to stanch society’s disintegration by stepping in where distracted or economically beleaguered parents can’t or won’t. In this case, with a day designated for giving compliments and expressing thanks.

Gerry is more than up for it, but then the challenges come — a friend out sick, a jar of sprinkles dumped, the disruption of a fire alarm, and, last but not least, the insult of seeing her artwork displayed sideways. In a wry comment on modern art, however, her cornucopia is deemed an improvement when seen as a clown face.

Naturally each setback presents a chance to turn the proverbial lemons with their circling fruit flies into a cool, refreshing drink — sweet, not too bitter. Battle through the adversity, kid. Grab that single can of beans from the shelf and hand it over for the food pantry. It’s the least you can do.

“Naughty Mabel Sees It All”

A truncheon’s a bit much. Instead, another princess of sorts, of the canine variety that is, Naughty Mabel, makes me think of a tall glass carefully selected from a kitchen cabinet, slowly filled to the brim with tap water, carried just so to avoid spilling a single drop, and briskly dashed full in the face of this inane, unfunny creature.

The actor Nathan Lane and his husband, Devlin Elliott, a Broadway producer, who are East Hampton part-timers, have just come out with the second in a series, “Naughty Mabel Sees It All” (Simon and Schuster, $17.99), with Dan Krall, a veteran of film and television animation, handling the artwork. In it, the mansion-dwelling doggie sickens herself by downing a bowl of potpourri and starts seeing double, going on to imagine all manner of monsters lurking in every corner, called forth by the shadows cast by overstuffed armchairs or a neighbor’s dinosaur bones — you name it, she destroys it.

My own sight fails when it comes to discerning the point of laying out the backstory of the retired paleontologist neighbor or introducing Mabel’s two friends, Smarty-Cat and Scaredy-Cat. Though I admit that may be absurd to say in the context of a children’s book. Because digressions, kids do seem to dig ’em.

It’s not even Halloween yet, but Christmas these days is on little kids’ minds practically the year round. Besides, as Loudon Wainwright III once put it in a mocking singsong, “Christmas comes but once a year . . . and goes on for two months.”

Coming out next week is a book that fully deserves to be a classic of the holiday. “The Great Spruce” (G.P. Putnam’s Sons, $17.99) by John Duvall, a native Long Islander who works with a tree farm in Jamesport, and Rebecca Gibbon, a British illustrator with a winning midcentury style, is a conservation story to warm the cockles.

“Alec loved to climb trees,” the opening sentence reads. But his favorite, “the most magical of all the trees, tall and strong and spreading ever upward,” stood in his own backyard, planted there by his grandfather.

Each Christmas the two decorate the giant spruce, one year drawing the attention of a man with a clipboard who convinces Alec’s parents to let him take it to the big city for display. Just before the chainsaw teeth start to bite, however, a little civic disobedience by Alec saves the day.

The result? The tree is taken, yes, but with its roots wrapped in a huge burlap ball for replanting whence it came. “We’re just visiting,” Alec tells a curious little girl.

An author’s note explains that such a practice is precisely what held sway in regard to the Rockefeller Center Christmas tree during the Depression years. No better time than now to turn back the clock.