Seasons by the Sea: National This and That Day 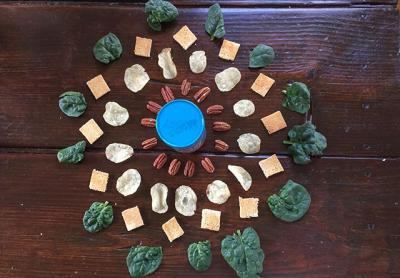 A mandala of foods celebrated this month, from the healthy (spinach) to the not so (potato chips).
Laura Donnelly
Where did all these seemingly ambiguous and arbitrary “holidays” come from?
By
Laura Donnelly

I’ve been noticing lately, well, actually, for the last couple of years, that almost every day, week, or month is National This or National That Day, usually food-related, and even more frequently, junk-food-related. Potato Chip Day, Frozen Food Month, Peanut Butter Week, Tater Tot Day, and so on. Where did all these seemingly ambiguous and arbitrary “holidays” come from?

First of all, there are only 10 national holidays recognized by the United States, like Christmas and Independence Day. Then there are the government-sanctioned holidays like Mother’s Day and Flag Day; there are 44 of these. Some national days are created by presidential proclamation or a resolution in the House or Senate. In July of 1984, president Ronald Reagan signed a proclamation marking the 15th National Ice Cream Day. He called it a “nutritious and wholesome food.” His favorite flavor was coconut. He also created National Frozen Food Day in 1984 (this is confusing because March is Frozen Food Month). June 25, 1987, was Catfish Day. These proclamations are actually a one-time-only deal, so there hasn’t been a National Ice Cream Day since 1984, but plenty of ice cream shops celebrate annually, nonetheless.

When you hear on the news or read on social media that it is National Doughnut Day or Guacamole Week, does this put a subliminal bee in your bonnet and make you dash out to the nearest Krispy Kreme or Mexican restaurant? I confess that when I hear that it’s National Chocolate Day — Oct. 28, 2018, mark your calendar! — I might indulge in a molten lava cake.

Obviously, a lot of these are just invented by companies trying to drum up business. For instance, National Drive-Thru Day was made up by Jack in the Box, and National Underwear Day was created by Freshpair, an online underwear company. Martha Stewart, Rachael Ray, and Bon Appetit magazine are known to use these faux holidays to promote their products.

Who decides these things, who keeps track? And how can I make a date in November for Peconic Bay Scallop Day? Several organizations keep track: National Day Calendar, based in North Dakota, was founded in 2013 and has noted close to 2,000 special days per year. They receive around 18,000 submissions each year. To create a holiday, you submit your idea to a committee and have to pay between $2,300 and $4,000 once the idea is approved unanimously by said committee. Chase’s Calendar of Events has been published annually since 1958 and in 1959 merged with another publication called “Special Days, Weeks, and Months.”

Foodimentary is a food day blog started by John-Bryan Hopkins of Alabama. When he discovered he had only compiled 200 actual food holidays, he started making them up. You can credit him for Tater Tot Day, Feb. 2, 2018, and World Whiskey Day, May 19, 2018, bless his little heart!

It’s a no-brainer that the restaurant industry would keep track of, and seek to capitalize on, food holidays such as National Chocolate Cake Day, Jan. 27, National Pizza Day, Feb. 9, and on and on with margaritas, shrimp, wine, eggs, onion rings, French fries, cheeseburgers, tacos, coffee, nachos, cookies, and lager. Again, I’m seeing a lot of junky foods here.

To some extent, all holidays are made up, including Christmas. Is it so bad that these food holidays make us giggle, give the newspapers and TV shows something silly to highlight? Even The New York Times gave National Meatball Day a few inches. They can bring us together to celebrate certain foods. It’s fun, if a bit out of control.

Fruits are fairly well represented, as are meat and mollusks, but as I mentioned before, there aren’t a lot of healthy items being feted. Where are the granola, tempeh, and quinoa days? The “make kale palatable” month? Wheat grass, spirulina, flax seed weeks? Maybe they’re just not fun enough, like the California Dried Plum Digestive Month. You can thank former California Governor Arnold Schwarzenegger for that gem.

So celebrate today with some peanuts if you like, and if you don’t have the chance, tomorrow is National Artichoke Heart Day, yum! You’ve got the rest of the month to whoop it up with Something on a Stick Day (March 28; think kebabs), poultry (March 19), and sauce (March is National Sauce Month).

Happy National Anything You Want It to Be Day!