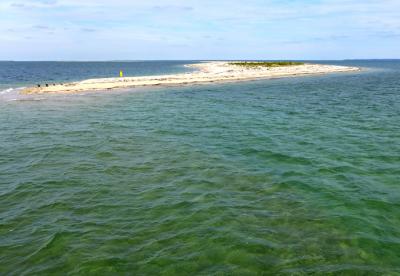 Cartwright Shoal, or Island, depending on who you ask, is at the center of an Amagansett resident's quest for public access. Tradition has held for more than 350 years that the disputed territory is part of the private Gardiner's Island.
David E. Rattray
By
Christopher Walsh

An Amagansett man who was arrested in July for trespassing on Cartwright Shoal, a tidal peninsula in Gardiner’s Bay, was buoyed by last Thursday’s presentation by the Suffolk County district attorney’s office that he said did not include proof that the shoal is privately owned.

Rod Richardson of Amagansett had removed two “no trespassing” signs from the sand spit, which police said is part of Gardiner’s Island, owned by the Goelet family trust, on July 25. He was charged with third-degree criminal tampering, a misdemeanor, and trespass, a violation. He has vehemently argued, however, that Cartwright Shoal is public property, citing his own research. “I understand the whole island and foreshore to be owned by the people of New York, who have every right to visit and enjoy this local treasure,” he said following his arrest.

Last week, Mr. Richardson said in a statement that the prosecution’s discovery file contained only the original charging documents filled out by the Goelet family’s security personnel and arresting officers, as well as a video of the incident recorded by the security personnel. “The file contained no deeds, royal grants, or anything that would establish ownership rights,” he said. He is moving to have the charges against him dismissed, and a judge is to respond to that motion on Feb. 7.

Mr. Richardson has asked the East Hampton Town Trustees, who have jurisdiction over many of the town’s beaches, waterways, and bottomlands, to support his effort to overturn what he has called an improper land grab.

At the trustees’ meeting on Friday, Steve Boerner, a real property consultant engaged by the trustees to try to determine ownership and public access rights with respect to Cartwright Shoal and Gardiner’s Island, issued a preliminary report. “At this point in the investigation, I feel that title to Cartwright Island is still with the Gardiners,” he said. “I feel that it’s part of that complex, at this point.” With respect to bottomlands, “I’m not seeing any documentation to that.”

“So what would be the water-ward boundary of the island?” asked Rick Drew of the trustees. “Is it mean high tide, is it mean low tide?” At the moment, Mr. Boerner said, and barring discovery of a document stating otherwise, “I’d have to say like everywhere else in New York State, the foreshore is within the State of New York.” The property’s boundary, in other words, is the mean high-water mark, he believes.

“Wouldn’t the public trust doctrine go in there?” asked Bill Taylor, a trustee, referring to the doctrine asserting public use of resources, including shorelines, regardless of private property ownership. “That was part of English law before they granted these patents, where the land between low water and high water belonged to the crown, and was transferred to the state, and it’s open to all people. That’s still in effect?”

A reading of colonial-era patents such as the Dongan Patent, the 1686 document that created the trustees and conferred ownership of common lands on behalf of the public, indicate “foreshore rights to the public,” Mr. Boerner said. But, he cautioned, “right now, my priority was to find the specifics of the boundary descriptions.”

Mr. Richardson believes that that preliminary opinion bolsters his contention that public trust rights dictate that the foreshore of Cartwright Shoal is public property. “We’re very much focused here on who owns Cartwright, as if that makes a difference,” he told the trustees. “You may have public or private ownership of a bottomland, but that doesn’t mean people can’t sail across those waters. That’s the same with the foreshore of an intertidal land.”

He quoted from “Vanishing Tidelands: Land Use and the Law in Suffolk County, N.Y., 1650-1979,” published in 1980. “ ‘In People versus Staten Island Ferry,’ ” he read, “ ‘the court clearly held that even though the king could grant submerged lands as private property, his grant was subject to the paramount right of the public to use the navigable waters, which he could neither destroy nor abridge.’ In other words, it really doesn’t matter, this search into who owns it, because the public trust rights to public access still exist. I would hope the trustees would champion that public right irrespective of who owns the island.”

Nonetheless, he added on Tuesday that he hoped Mr. Boerner’s report would address fact-based questions such as whether or not the Goelet family has “clear, explicit, unambiguous title, in the form of a royal grant or deed” to Cartwright Shoal. “The answer to that question should be a core conclusion,” he said in an email.

Mr. Boerner told the trustees that his research would continue.