Poetic Sparks in the ‘Hooley’ Tradition 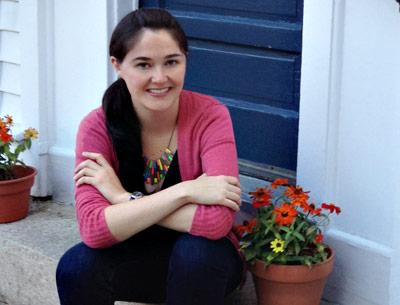 The poet Caitlin Doyle’s latest writer-in-residence fellowship will take her in the spring out to Interlochen, Mich., where she will teach, lecture, and continue work on her first book of poetry, tentatively titled “Tea in Eden.”
Celina Carvajal
By
Irene Silverman

The number of young people in today’s information-overloaded America who are managing to make a living writing poetry probably exceeds the nation’s current population of ivory-billed woodpeckers, but both birds and poets are indisputably endangered.

If the woodpecker can be found at all it will only be in a Southeastern swamp, but look for the up-and-coming poet here, there, and everywhere as she flits across the country from one writer-in-residence position to another. Landing these prized grants, which provide just enough money to keep body and soul together as well as living and working space for a period of weeks or months, is no job for the uninspired or the unpublished; the competition is fierce and the fellowships are few.

But Caitlin Doyle, who grew up in East Hampton, has never let long odds deter her. As an East Hampton Middle School student she won her first literary contest in a Suffolk County competition for writing on an environmental theme. The prize was a tree planted at the school in her honor, which she is pretty sure is still there today.

She received the University of North Carolina’s Thomas Wolfe Scholarship in creative writing — a full four-year ride to Chapel Hill — for a series of satirical poems about waitressing at the old Star Room in Wainscott, and since then the awards have accumulated almost nonstop. She was in Stonington, Conn., in September, working on poems and giving readings as writer-in-residence at the James Merrill House there; last year she taught creative writing at Penn State in State College, Pa., and the year before she spent a sunny winter in Orlando, Fla., on a fellowship at the Jack Kerouac House. Her latest grant, which she learned of just this month, will take her out to Michigan to spend a spring semester as writer-in-residence and lecturer at the prestigious Interlochen Arts Academy.

Ms. Doyle comes from a family of storytellers. Her father, originally from Dublin, was the bartender at Sag Harbor’s American Hotel when she was a child, and his tales of the eccentric characters who convened there, many of them writers, “stirred my curiosity,” she said, “and planted in me an early fascination with the literary life.” Interviewed by The Irish Examiner newspaper this summer about a prose piece in the Cork Literary Review subtitled “Coming of Age as an Irish American Poet,” she recalled her father’s stories about the “hooleys” he had attended in Dublin, where poets and writers came together in a shared love of language.

“I wondered how the love of words that defined the hooley tradition could exist in tandem with the fear of words that drove the country’s prohibitive attitude to so many books,” she told the interviewer.

Critics have remarked upon that same dichotomy in her work, which has been described as full of “the unease that stalks our comfort.”

A review of her poem “Thirteen,” which was anthologized in “Best New Poems 2009” (Samovar Press), describes it as “such a remarkable combination of ideas and word-play around the transformations to a girl in her thirteenth year, that it is like a socks-on-carpet spark to the brain.”

There are as many years in you as witches in a coven,

devil’s dozen, number of steps to the noose, no use

to rub a rabbit’s foot or knock on wood,

you’ve had one too many birthdays than you should

and the thirteenth they rebelled

so you learned to read from the book your father

and in your heart you said the multiplication tables

must go higher and then you began to bleed. Old dress filling with new need!

(The Cities of the Plain rebelled against Chedorlaomer, a king of Elam, after 12 years of bondage, according to the Book of Genesis. The full text of “Thirteen” can be found at caitlindoylepoetry.com.)

Although Ms. Doyle’s poems have appeared in book anthologies, literary journals, and such widely read magazines as The Atlantic and Boston Review, she has yet to publish her first poetry collection. It exists, though, in manuscript, with the working title “Tea in Eden.”

Asked by “The Next Big Thing,” a series of interviews with emerging poets, to give a short synopsis of the book, she answered: “I hope to reconnect readers with the primal ear-delight of their early years, bringing them back to their first pleasure in hearing nursery rhymes, lullabies, commercial jingles, and playground songs, while also feeding their grown-up appetites for intellectual depth, sonic complexity, and emotional resonance.”

Quite a tall order. But judging by her résumé to date, if anyone can fill it, it will be Caitlin Doyle.