Personable Pro Has Returned to S.Y.S. 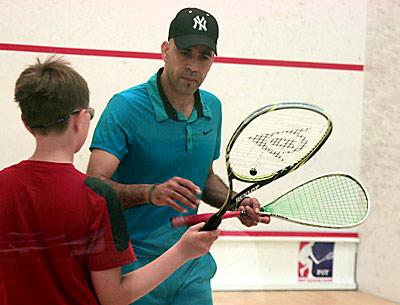 Sayed Selim, an Egyptian-born squash pro who once coached that country’s national women’s team, and who, after beginning to build a junior program at the Southampton Recreation Center, left in the fall of 2010 to teach at the Pyramid Squash Club in Tuckahoe, N.Y., recently returned here, intent on taking up where he’d left off.

“I don’t want you to take a picture of me smiling this time, for I’m serious,” said the personable pro during a conversation at the Elmaleh-Stanton courts Sunday. “We are going to get the Squash Academy [an after-school mentoring program for East End youth who might not otherwise be introduced to the fast-paced racket sport] this fall, and we’ll have school leagues for sure. . . . I had 70 kids playing when I left; there were only four when I came back two months ago. . . . I am so happy to be back. I feel at home in the Hamptons.”

In the past year and a half, Selim said, he had coached promising juniors at the Pyramid Club, including Cameron Munn, fifth-ranked in the United States among the under-13 girls; Ryan Murray, the world’s number-one in the under-16s; Olivia Robinson, the United States’ under-11 champion, and the top-ranked under-11 boy in the U.S., Morgan Huberman. “The Pyramid Club gave me a good chance to work with really good kids.”

He is here full time in the summer, giving lessons and overseeing camps. In the off-season, he will divide his time between New York City and S.Y.S., coaching here on the weekends.

A $20,000 women’s professional doubles tournament and pro-am that is to help raise money for the Southampton squash program is to be held at the Elmaleh-Stanton courts from today through Sunday morning. Admission to the tourney will be free.

Speaking of touring pros, Selim said he still intends, provided a permit is granted by Southampton Village, to hold a professional squash tournament, “probably for men,” in a plexiglass court at Southampton’s Lake Agawam next summer. “And I also want to have the world junior championships here in 2014.”

On another subject, politics in his native land, which he said has been for periods throughout the years under colonial rule — including that of the British, who brought with them the sport of squash — Selim said he was happy that Hosni Mubarak had yielded dictatorial power, and hopeful that the present army-controlled government would soon give way, without shedding more blood, so that democracy could continue apace.

“My idol, Ahmad Harara, one of the young revolutionaries, who has lost the sight in both his eyes, has said he’d rather have no sight and be free than to be able to see and be oppressed. . . . The government we have now is not good, but anything’s better than Mubarak. I think we can go forward. I hope peacefully.”