Once a Sag Harbor Landmark, Now a ‘Time Bomb' 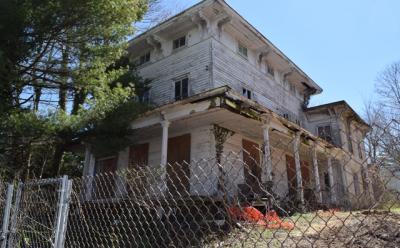 The house formerly owned by the Morpurgo sisters, at 6 Union Street in Sag Harbor, has fallen into fatal disrepair in the past year, leading Tom Preiato, the village building inspector, to recommend it be razed.
Taylor K. Vecsey
If Morpurgo house is not brought to code in 60 days, village can demolish it
By
Taylor K. Vecsey

Barring any last-ditch efforts to save it, the dilapidated house at 6 Union Street in Sag Harbor may soon meet its end. The village board voted Tuesday night to accept the building inspector’s recommendation that the time has come to demolish the building.

Village officials have long had concerns about its safety. The two-and-a-half-story, 4,000-square-foot, Federal-style house, which sits on a lot next to the John Jermain Memorial Library, is about 210 years old and is known as the Morpurgo house. Two sisters, Annselm and Helga Morpurgo, fought over it for decades while it fell into a state of disrepair. In 2007, by which time it had had no heat or running water for years, the village deemed it unfit for human occupancy.

In February 2015, the village tried demanding that the house be cleaned up after Tom Preiato, the newly hired building inspector, found it to be in violation of both state and village codes. He cited an open septic tank, large holes in the walls and floors, and a compromised front porch, among many other violations. He wanted either all or part of the house demolished and a fence erected to keep trespassers out and passersby safe.

On Tuesday, Mr. Preiato said the house had fallen into further ruin. “It’s only gotten worse. It’s at this point that I recommend we remove the structure,” he told the board.

During his most recent inspection on March 24, he said, he found holes so big in the exterior walls that anyone could walk through them “and fall right into the basement, because the first floor is gone.” There were “piles of combustible material” in back of the building, the chimney is “in danger of collapse,” and “the structural integrity of the building itself is certainly compromised to the point, although I’m not an engineer, I don’t know it could support its own weight much longer.”

The village will put the owner on notice and file a notice with the Suffolk County Clerk, as required by law, that if the building is not brought up to code within 60 days, the village can demolish it and bill the owner. A hearing on the matter will be held on May 10 at 6 p.m.

Though Mr. Preiato’s request for demolition came as no surprise to villagers, some in attendance Tuesday night were nonetheless trying to come up with a way to salvage something of the house.

“It makes me very sad to think about this coming down,” Mia Grosjean of Howard Street said, adding that she wished the board would get an engineer to ensure it was necessary. An engineering report was already done last year, the board said. At the very least, Ms. Grosjean said, the village should document the house before demolition.

“I kind of would like to forget what it looks like,” Mr. Preiato said, though he agreed it had some “beautiful architectural details.”

“I think the continuation of this structure is an insult to Sag Harbor, and it’s an insult to the governance of Sag Harbor that it hasn’t been condemned long ago,” said Joy Lewis of Hampton Street. Still, she said, it would be wise of the village to get an architect to take measured drawings, the only way left to preserve it.

Bob Weinstein, who lives on Jefferson Street, asked how long the community had before the house got the wrecking ball. From past conversations he’d had with the director of the Society for the Preservation of Long Island Antiquities, he said, he got the sense that on some level, no building was beyond salvation on some level. “The sticky wicket here is, there has been no owner for someone to buy it from.”

The owner of the house is a limited liability corporation called Captain Hulbert House, whose principals have not been identified. The L.L.C. bought the house at auction in November 2007 for $1.46 million. It has since gone into foreclosure, adding to the question of who can do what to it.

A hearing in February 2015 was meant to put the owner on notice that work had to be started within 30 days and finished within 60 days, or the village would have it done and bill the owner. However, the hearing only seemed to raise more issues. Atlantic View Holdings, which then held the mortgage, sent an attorney to explain that they were tied up in court over the foreclosure and could not take any action until that process was completed. David P. Fallon, a Sayville attorney representing the lender, told the board the house was one of many caught up in the phony mortgage schemes that landed former Suffolk legislator George O. Guldi in jail, convicted of $82 million in mortgage fraud. He is serving a 4 to 12-year sentence in the Marcy Correctional Facility upstate.

The lender did end up erecting a fence, though on village property, because it could not be put up on land that still, technically, belonged to the owner, according to several board members. Denise Schoen, who was representing the village Tuesday night, said the taxes are up to date.

“We can’t sit here with a time bomb and baby-sit something,” Mr. Preiato said in response to several please from the audience for the village to save the house. “No one has come forth. There’s only been a half-hearted effort.” Mr. Fallon could not immediately be reached yesterday.

While the board agreed to proceed with demolition, James LaRocca, a member, said there was nothing to prevent the antiquarian society or any other interested party from approaching the lender about buying the property.

“We have to do some creative footwork here,” Ms. Grosjean said.