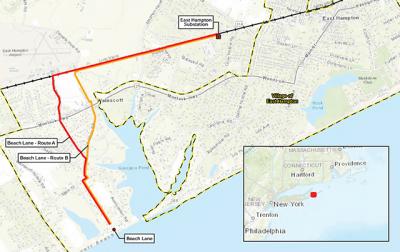 By a 3-to-2 vote that was marked by sharp disagreement, the East Hampton Town Board authorized an agreement with Orsted U.S. Offshore Wind last Thursday that will allow it to conduct archaeological and soil tests along a proposed cable route in Wainscott.

The company, which until its November acquisition by the Danish energy company Orsted was known as Deepwater Wind, plans to construct the 15-turbine South Fork Wind Farm approximately 35 miles east of Montauk.

Separately, Eversource, New England’s largest energy company, announced on Friday that it had purchased a 50-percent stake in the South Fork Wind Farm and Orsted’s Revolution Wind as well. The $225 million deal also included a federal lease area south of Massachusetts and Rhode Island. Orsted took over all three assets in November as part of its acquisition of Deepwater Wind, the Rhode Island company that first developed the projects. Deepwater Wind is now called Orsted U.S. Offshore Wind.

The South Fork Wind Farm was originally proposed as a 90-megawatt installation; Orsted U.S. Offshore Wind officials say now that improvements in turbine technology will allow generation of up to 130 megawatts. According to the company’s timeline, it could be operational in late 2022.

On eastern Long Island, Deepwater identified the oceanfront end of Beach Lane in Wainscott as the preferred site to land the wind farm’s transmission cable. From there, the cable would run underground to the Long Island Power Authority substation in East Hampton.

Archaeological test pits are to be excavated by hand to depths of up to 4 feet and approximately 18 inches in diameter, at 50 to 100-foot intervals. The pits are to be filled upon completion. The work is planned along Beach Lane, Wainscott Main Street, Sayre’s Path, Wainscott Stone Road, and Wainscott Northwest Road, where it will continue to the intersection with the Long Island Rail Road right of way. Soil samples will come from two test borings and there will be a drainage test within the town-owned right of way at Beach Lane.

The New York State Public Service Commission requires the archaeological study. The P.S.C. and the federal Bureau of Ocean Energy Management are among the agencies that must approve the project for it to move forward.

Many Wainscott residents oppose the plan to land the cable at Beach Lane and have urged the town board to insist on another site, such as state-owned land at Hither Hills.

Supervisor Peter Van Scoyoc said last Thursday that the Wainscott Citizens Advisory Committee had sent a letter to the board asking that Orsted U.S. Offshore Wind acknowledge whether or not it would also conduct such sampling at Hither Hills.

“I do have a letter, received late today, confirming that the Hither Hills route is being tested in a similar way,” he said.

Clint Plummer, Orsted U.S. Offshore Wind’s head of market strategies and new projects, said on Monday that the company is indeed “going forward with investigations” on both the Beach Lane and Hither Hills routes. “The data we’re trying to collect would be identical,” he said. “The scope would be different, because they are in different geographies with different constraints, different existing usage.”

Councilman Jeff Bragman, who is the board’s liaison to the Wainscott Citizens Advisory Committee, was one of two votes against authorizing the sampling in Wainscott, joining Councilman David Lys. He was skeptical of Orsted’s intentions. “The fact that Deepwater is telling us in a letter that this coming summer they’re going to do some work in Hither Hills is hardly reassuring about the message that this work [in Wainscott] is sending, which is being done months earlier,” he said. “I can’t see any reason that the Town of East Hampton should be jump-starting the work” in Wainscott, “particularly when the Article VII review hasn’t even begun.”

Wainscott residents do not want the transmission cable running through their hamlet, he said, “and a lot of questions about this project remain unanswered.” The Article VII review will consider the viability of alternative sites, he told his colleagues. “They may . . . say, ‘We want archaeological tests,’ or ‘We want soil-boring tests,’ but you don’t just willy-nilly go and okay it.”

“I’m going to differ with your characterization of willy-nilly,” Mr. Van Scoyoc said. “It’s pretty clear that the work could be done in the summertime in Hither Hills,” where land is undeveloped. “It’s certainly not going to be done in the summertime in Wainscott. . . . I think more information is good. It’s certainly part of the Article VII process. It does not mean it cannot occur prior to that Article VII process being completed.”

Councilwoman Sylvia Overby agreed. “Part of the information we’d get from this would inform the Article VII,” she said. Sampling in Wainscott could reveal “that this is exactly the wrong location. . . . It may take it off the table completely.”

Mr. Bragman was unmoved. “Authorizing this prematurely and giving a jump-start to a route in Wainscott is improper, and I don’t think we have the authority to do it,” he said. “So I’m voting no.”

The town board, and possibly the town trustees, would have to grant an easement or lease for Orsted U.S. Offshore Wind to land the cable at Beach Lane and bury it along its route to the LIPA substation. “We believe the town is moving forward in good faith,” Mr. Plummer said, “but until we have that deal finalized, we are doing everything as quickly as possible to advance the Hither Hills route so in the event things do not proceed with Beach Lane, the project is moving forward.”

Though he said that a Beach Lane landing is “on many objective levels better,” the company would land the cable at Hither Hills if the town does not grant an easement at its preferred site.

According to a statement issued on Friday, Eversource will pay approximately $225 million for a 50-percent stake in Orsted’s South Fork Wind Farm and Revolution Wind projects, the latter to deliver power to Connecticut and Rhode Island, as well as the 257-square-mile federal lease area off the coasts of Massachusetts and Rhode Island in which they are to be situated.

The deal builds upon Bay State Wind, the companies’ existing partnership in a separate 300-square-mile tract adjacent to the federal lease area originally won by Deepwater Wind. Together, the companies say that the lease sites they jointly own could generate 4,000 megawatts of electricity.

The two companies will mutually manage permit requirements for their projects and have pledged to honor planned local investments and agreements entered prior to the partnership.

Revolution Wind is a planned 700-megawatt wind farm to be sited approximately 15 miles south of Rhode Island. Orsted and Eversource aim for it to go online in 2023.

Additionally, the Orsted-Eversource partnership is participating in New York State’s first offshore wind energy solicitation, through which the State Energy Research and Development Authority plans to procure 800 megawatts of offshore wind. Bids are due today, with awards expected in the spring.

“Over the last several years, the two teams have worked together very closely, and have established a joint project development team,” Mr. Plummer said of the Orsted-Eversource partnership. “When Orsted acquired Deepwater Wind, it was logical to expand those resources and capabilities to the rest of the New England portfolio.” Eversource, he said, is “another strong American energy company that wants to make investments in assets like these.”

Mr. Plummer said that along with himself, Deepwater Wind officials including Jeff Grybowski, its chief executive; Aileen Kenney, a vice president; Julia Prince, Montauk manager and fisheries liaison, and Jennifer Garvey, Long Island development manager, remain in important positions within the Orsted organization. “The thing that has changed is we are now executing this project with a larger group of people, which gives us more capability, and with companies with significant balance sheets, which gives us significant resources,” he said.

While the American offshore wind industry is experiencing a growth spurt, there are just five turbines in the nation’s waters, those of the Block Island Wind Farm, which Deepwater Wind commissioned in December 2016.

“Our challenge now,” Mr. Plummer said, “is less about how you construct these. It’s around the type of work we are doing now in East Hampton: making a big global business, like offshore wind, fit into an American context and — in many ways more importantly — making it fit into the context of the local communities it’s going to serve.”