Notes From the Underbelly 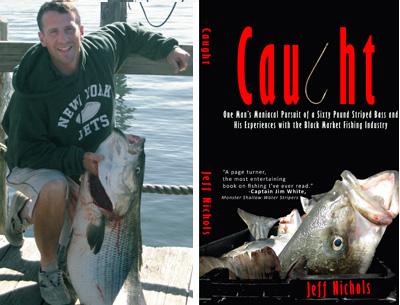 The Jets and this gape-mouthed sea creature may be on the losing side, but Jeff Nichols is out with an in-some-ways-winning new book.
An autobiographical account of a fish-a-holic
By
Russell Drumm

About two chapters into this book I was poised to dislike it, but like a “Trainwreck,” the title of Jeff Nichols’s memoir published in 2009 and turned into a movie two years later, I found it impossible to avert my eyes.

“Caught” is an autobiographical account of a fish-a-holic. No kidding, there is such a thing and Mr. Nichols proves it. He was born into a blue-blooded family, prep-schooled, tennis-camped, and, before he lost it because he went fishing instead of attending a meeting with the family attorney, he was the prodigal inheritor of a rent-controlled Park Avenue apartment.

The author is self-deprecating, and to paraphrase Winston Churchill’s zinger, he has lots to be self-deprecating about. He writes that he suffers from attention deficit hyperactivity disorder, he’s been an alcohol and drug abuser, a stand-up comic who stole jokes from other funnymen, and, worst of all by far, to his way of thinking, a dealer of striped bass on the black market.

Mr. Nichols plays loose with a few facts, but hey, A.D.H.D. is a bitch. For the most part, the tale unfolds in Montauk. Some names have been changed to protect the guilty and their pursuers. Readers might recognize a certain conservation officer despite a name change that rhymes with Billotto nonetheless. And, despite his obvious respect for commercial fishermen (he worked for a time on a dragger), he parrots the sportfishing industry’s revisionist babble about how our local baymen deserved to have their haulseine fishery taken away from them because their nets caught too many fish.

For the record, when it comes to striped bass, sportfishermen have always outharvested netters in this state, by far. The East End’s haulseine fishery and a centuries-old way of life were flat-out stolen by the UpIsland sportfishing industry in league with the state’s conservation department. The author states that the government compensated baymen for their lost fishery. Of course, that did not happen.

But to his credit, Mr. Nichols does not hold back in revealing the dark underbelly of the sportfishing industry, one that reputable charter and party boat captains abhor. The flouting of quotas and the unlicensed sale of fish damage the effectiveness of conservation plans and undermine the law of supply and demand that honest commercial fishermen depend upon. The author knows how the black market works because he was part of it: the all-night fishing trips, the iced coolers, the trips to Chinatown in the city, the cash that served to fuel his striped bass fishing habit and little else.

The book is a mea culpa. In two of the more humorously sad sections, Mr. Nichols tells of how his fishing addiction drove him to sell the family’s first-edition set of Rudyard Kipling works, and later to leave his girlfriend on a romantic vacation in Greece, where the moonlight — its ability to stir the appetites of big bass rather than his own — caused him to fly back to New York and hop on the L.I.R.R. to Montauk in order to catch the full-moon bite.

But “Caught” is also a paean to Morone saxatilis, the striped bass. He loves the fish, especially the very big ones, the 40 and 50-pounders as well as the 60-pound stripers that elude him like Moby. Nothing in life has given him more pleasure than the pursuit. He was able to conquer his attention deficiencies long enough to actually learn how the veterans did it, to evolve from fishing dilettante to sought-after charter captain with the help (and angry hindrance) of some of Montauk’s more colorful characters. The chapter on Capt. Jimmy George is especially revealing.

The pursuit leads him to the realization that he’s become schizophrenic about striped bass. He was addicted to catching and illegally selling the very big ones, but the “cows,” the big breeding females, are the future of the species he is addicted to pursuing. In the chapter “Big Fish Little Dick: The Last of the Trophy Hunters,” Mr. Nichols comes to see that the trophy fish, the dead “slob” hanging from the scale, and sportfishing’s ancient raison d’etre, should be released to breed again.

“Caught” is maddening in parts, and has its flaws. It is not literature, although I’ve come to the conclusion the definition of lit should be expanded to include any book that keeps the reader from closing it. Mr. Nichols keeps the pages turning, and there’s charm in his storytelling. It’s sure to piss off some fishermen, and I like that too.