Music in the Morning, and Much More 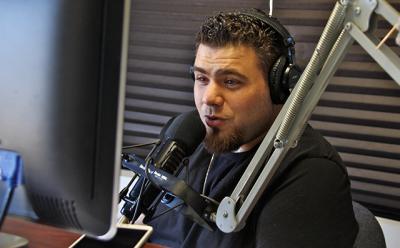 Anthony, host of “The Morning Show” on WEHM, is wide awake and serving up music and laughter at 6 a.m. daily.
Durell Godfrey
Broadcasting from a studio in Water Mill, Anthony is on-air at 6 a.m
By
Christopher Walsh

Those of us on the South Fork who are decidedly not “morning” people can awaken to music and high spirits at 92.9 and 96.9 on the FM dial, where Anthony, host of “The Morning Show” on WEHM, reliably serves up an abundance of both.

Broadcasting from a studio in Water Mill, the D.J. is on-air at 6 a.m., winding up his show at 10 with a context-free audio clip from “The Family Guy.” In between, new and catalog rock ’n’ roll music mixes freely with news, sports, and weather dispatches, a range of topics trending on social media, and Anthony’s playful and often hilarious free-association riffs on anything and everything.

Concert tickets are given away, and he engages listeners on the air, some of them regulars with handles including Twitter Bill and Bud the Hippie. Nine-to-fivers getting ready for the day can monitor their punctuality, or tardiness, with daily features including Breakfast With the Beatles (7:20) or the EHM Cover Story (8:45). And always, witty and irreverent commentary, sometimes over clips of rock-star stage banter gone wrong, “cheesy love songs” such as Friday’s observance of Valentine’s Day, or on the D.J.’s love for food (he is not a vegetarian).

“I grew up a wise-ass, so it’s easy,” said Anthony, whose surname is closely guarded. Turning serious, he allowed that “to be humorously appealing to people is not easy. For a time there, you were a serious political talker, or you were a shock jock.”

Though the native of Howard Beach in Queens grew up in a house filled with music and was smitten by radio early in life, Anthony might have ended up an executive with his beloved New York Islanders. Studying sports management at St. John’s University, an internship with the team was to lead to full employment. Fate intervened, however, with the National Hockey League’s 2004-05 lockout, which canceled the season. “That was it for my sports career.”

Fortunately, a career in radio would also be born at St. John’s. “They piped their radio station through the cafeteria,” he remembered. “I think I had just broken up with a girlfriend, was hanging out with a buddy, and it was ‘I can do better than this.’ We went up to the fourth floor and I had a show, like, two weeks later. I became the program director three or four months after that, and really fell in love with it.”

The groundwork, however, had already been laid. “I came from an Italian family, so every Sunday morning there was sauce on the stove as you woke up, getting ready for that night’s dinner, but there was also music — Sinatra and Jimmy Roselli and Tony Bennett. My grandparents had a record player, and my grandmother was always playing music. That filtered down to my parents.”

His father, fittingly, was also in the communications business, working for the telephone company and with its volunteer organization, Telephone Pioneers of America. “We used to do walks and various benefits,” Anthony said. “We were at one and I got a keychain for WPLJ, which was Power 95.5 at the time. I remember holding on to that and just loving it.”

On family trips to and from his grandmother’s summer house in New Jersey, the radio was often tuned to the Don K. Reed Doo-Wop Shop on WCBS-FM, or to Sid Mark, a Philadelphia D.J. who presented shows devoted to Sinatra’s music.

After a brief, unhappy stint in the financial business, promotional work for Farmingdale-based stations led to the programming and promotions departments at WCBS, which led to weekends on-air at WBAZ, a sister station of WEHM. In 2006, Anthony moved to weekends on WEHM, and then to weekday afternoons.

In time, Lauren Stone, WEHM’s program director, moved him to mornings. “I was doing a morning show in the afternoon,” the D.J. said. “It just didn’t fit as well.”

“That’s how I felt,” Ms. Stone, who in 2014 bought Long Island Radio Broadcasting, the parent of WEHM, WBAZ, and WBEA, said last week. “It seemed an obvious choice.” Anthony, she said, “has so much raw talent. He’s totally uninhibited. He’s not afraid to try something new. If it works, great; if it doesn’t, he’ll keep going. It’s a wonderful quality.”

“It’s weird,” Anthony mused. “I always consider myself more a radio person than a music fan. I like the intimacy, the theater of the mind, the immediacy of the medium.”

Ms. Stone “outlines the playbook,” he said of WEHM’s musical path, and Harry Wareing, the music director, assembles daily logs. “We’re in the unique situation where I can do whatever I want with it. I think the last time a program director said that to an on-air personality was in the ’70s. It just doesn’t happen anymore.”

The freewheeling vibe of “The Morning Show” belies no small amount of preparation, however. Anthony, who became a parent in September, commutes to the station from Manorville and is wide-eyed at 6 a.m. sharp. “I know what I’m going to talk about the night before, unless something wild happens after 10 p.m., which sometimes happens. I’m pretty well prepared the night before, but I do get up early in the morning” — 4 a.m., give or take 15 minutes — “to make sure the president is still alive, make sure we didn’t get invaded by anybody.”

Does he ever feel off his game? “At 5:59 I do. At 6, no, because I love doing this every day.” His enthusiasm is unmistakable, and has earned loyal listeners throughout the South Fork, southern New England, and, via the live stream from WEHM’s website, as far away as Turkey and Afghanistan.

Talking on-air with Gregg Allman was “beyond weird,” Anthony said. “When I was listening to music and appreciating it, it never, ever, crossed my mind that I would be having conversations with these people, about whatever I wanted to talk about, you know? When you get to talk to somebody like that, that still blows my mind.”

Also among Anthony’s listeners is Howard Stern, who has a house in Southampton. The infamous shock jock, who had taken up photography, asked if he could visit the studio and photograph the D.J. Unsure if he was being pranked, Anthony agreed, on the condition that Mr. Stern bring food. “Sure enough, he came rolling in with two trays of food and his camera, and was cool as shit, talking to me like we’re on the same level — which we are absolutely not — and just being a real human being.”

“One of the reasons he connects so well with the audience is he doesn’t take himself too seriously,” Ms. Stone said. “He’s having a great time, and he is one of the listeners. That’s what makes him so lovable and relatable.”

In an on-demand world in which millions of songs are available via streaming services, and satellite radio offers scores of niche stations, that is no small accomplishment. “There is an incredible amount of loyalty to the show and to the station,” Anthony said. “The Morning Show” is clearly an extension of his life.