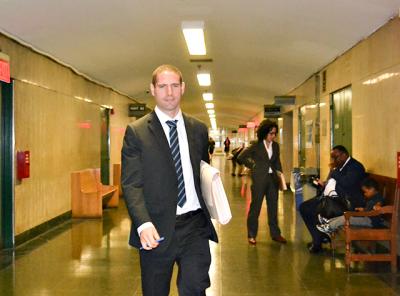 Craig Ortner, above, is handling the people’s case against Thomas Gilbert Jr., who is charged with patricide.
T.E. McMorrow
By
T.E. McMorrow

Thomas Gilbert Jr., whose family house in Wainscott was sold after he was charged with murdering his father in his Manhattan apartment on Jan. 4, 2015, made a rare appearance Tuesday in the Centre Street courtroom of State Supreme Court Justice Melissa Jackson. Mr. Gilbert, who is being held on Rikers Island, has attempted suicide on at least one occasion since being locked up, according to the prosecutor, Craig Ortner.

At issue Tuesday was whether Mr. Gilbert, a Princeton graduate whom police said had staged the murder scene to look like a suicide, should undergo yet another round of psychiatric tests. Three doctors have already offered conflicting opinions as to his sanity. Now, two more doctors have asked to be allowed one more exam, which, unlike the others, would not be videotaped.

If in the end the defendant is deemed mentally incompetent, he will not stand trial. His lawyer, Alex Spiro, argued this week that Mr. Gilbert’s having swallowed a small battery and then claimed to be radioactive, was a sign of mental incompetence.

“The defendant did, in fact, swallow a battery,” Mr. Ortner said. “That appears to have come on the tail end of a series of gestures that could be interpreted as suicide attempts. . . . It is sad but not surprising that someone in the defendant’s unenviable position, incarcerated, facing the prospect of life in prison” would be suicidal, he said.

“He is telling me that he can’t think because he is radioactive,” Mr. Spiro countered.

The two also jousted over the accused’s repeated calls to a cable television provider, previously identified as Cablevision, the provider of the signal to Rikers Island. In fact, Mr. Ortner said, those calls were to Cablevision’s Optimum Online, the provider of the signal to the Gilbert family’s former home on Georgica Association Road. “He wants records from his parents’ home in the Hamptons of telephone usage from around the time of the murder,” Mr. Orton said. “The cable company has been refusing his request to provide them, because the account holder of record, Thomas Gilbert Sr., is dead. Because the defendant, Thomas Gilbert Jr., is not the account holder of record, the cable company will not send the phone records” to the jail.

The defendant, wearing an orange jail-issue jumpsuit, his blond hair now down to his shoulders. sat silently next to Mr. Spiro as the lawyer continued giving examples of his presumptive insanity. “In addition, he has asked me to tell the court that there is a witness he needs to speak to and therefore wants the court to issue a subpoena to the Iraqi Consulate.”

Justice Jackson weighed in. “I [previously] found your client to be fit,” she began. “I disagreed with the state psychiatrist, after seeing your client not only on video, but in person in court. The only reason I ordered [another mental health test] is your representation that your client is not competent. The issue is competency. It is not mental health. Is your client mentally competent? What is different today?”

“It seemed to me that the court was seeking an acute example of psychosis. We have never had one conversation about the defense of the case, the facts of the case,” Mr. Spiro answered. The various incidents he had described, he said, “suggests extreme psychosis, that he is unfit, I am asking that he be allowed again to meet with the doctors, under the conditions we discussed.”

“The court is compelled to exercise caution,” Justice Jackson finally said, ordering the exam to go forward. She asked Mr. Spiro and Mr. Gilbert when they would like to return to court, giving them several dates in August. They chose the last one available, Aug. 17.

The defendant was led away, not looking back, and Mr. Spiro accompanied Shelley Gilbert, his mother, out of the courtroom. Mr. Spiro was asked in the hall if the current psychiatric exam the court had ordered was standard.

“I’m not commenting, but I wouldn’t call anything here standard,” he responded, as the two stepped into the elevator.