Lost and Found ‘In the Cloud’ 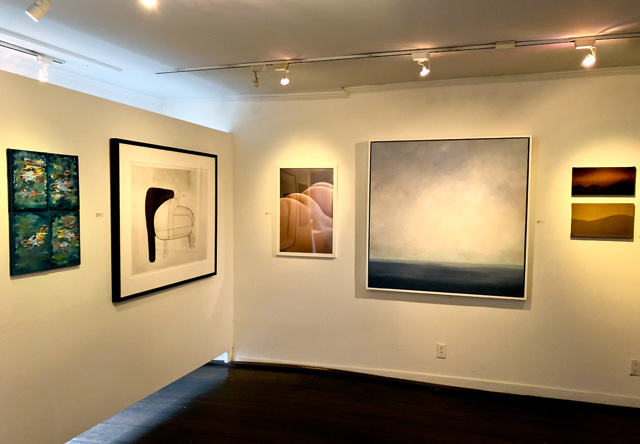 Works by Mark Perry, Hiroyuki Hamada, Insuh Yoon, Kurt Giehl, and Linh Vivace are hung together in the show. Below, Rosario Varela’s “Ancestors” sculpture has a metaphorical relationship to the exhibition’s theme. Seen in detail to the right are works by Christine McFall and Lesley Obrock.
By
Jennifer Landes

Making a quick stay at the Kathryn Markel space in Bridgehampton (and open Thursday through Sunday) is the Neoteric Project’s group show “In the Cloud,” featuring work selected by Scott Bluedorn. Once placed in a brick-and-mortar space in Amagansett, Neoteric now lives “in the cloud,” as Mr. Bluedorn puts it, which inspired him to bring together “several wide-ranging artists in a spectrum of media.”The list of artists and works is quite staggering when you consider that the Markel space, a small but striking set of white walls and alcoves, is no bigger than a small apartment with a sleeping loft. They are Darlene Charneco, Rosario Varela, Dalton Portella, Paton Miller, Aurelio Torres, Roisin Bateman, Hiroyuki Hamada, Janet Jennings, Charles Ly, Daniel Cabrera, Sara Tallet, Ria Anasagasti, Aaron Warkov, Jane Martin, Insuh Yoon, Jackie Dandelion, Rowan Hausman, Linh Vivace, Kurt Giehl, Kym Fulmer, Saskia Friedrich, Leslie Obrock, Thomas Halaczinsky, Christine McFall, Janet Culbertson, Janet Goleas, Will Ryan, Rossa Cole, Mark Wilson, Jodi Bentiveglia, Mark Perry, Colin Goldberg, Monica Banks, and Mr. Bluedorn.What unites such a disparate and prodigious group is — as should be inferred — references to clouds or cloudiness, both direct and less obvious. Sometimes they are the subject and sometimes they are the background or theme. It might be an aura around the portrait heads of Ms. Bentiveglia and the thick hair in Mr. Ly’s “Wild,” or Ms. McFall’s glossy and light-catching painting that is actually titled “Cloud” or Ms. Banks’s “Cloud Nest,” a small wire sculpture hanging from the ceiling with tiny found trinkets adorning it, like an approaching weather pattern gathering over the gallery desk.There are a number of landscapes and some very abstract compositions, and more figurative references than might be expected. This is all to its credit. The cloudlike pillows of human buttocks as taken through the lens of Ms. Yoon, Mr. Ly’s references to a head and other body parts, Paton Miller’s group of three figures in a threatening landscape, Mark Wilson’s floating surrealistic facial features, Ms. Bentivegila’s touching portraits of her family members who have passed on, Ms. Anasagasti’s “Becoming Nephele” with images of women against a compact universe, and Ms. Tallett’s floating face in the sky in “Bodhi (In the Waters of Sleep)” use the body and its parts as metaphors or launching points to explore physicality’s relationship to the cosmos. One thing that becomes clear in this context is that despite the breadth of human artistic expression, the geometric forms of nature — be they from landscape, sea, sky, plant, or animal — are finite. This allows for the crossover of so many of these images into themes that would be completely unrelated once removed from these walls.But there are direct references to the sky as well. Through Ms. Martin’s dreamy clouds in her “Isle of Sky II,” Mr. Portella’s lyrical watercolor “Montauk Sky,” Mr. Ryan’s tangerine dream of a sky in “Flying Over,” Mr. Warkov’s “Clouds and Fog Shroud the Mountain,” and, more loosely, Mr. Goldberg’s “Go,” all placed near each other demonstrate together a mostly literal relationship with the theme of the show. In the back alcove, Ms. Jennings’s “Storm Series IV” with painting over a print and upstairs Mr. Halaczinsky’s photographic print, and even Ms. Culbertson’s more abstract painting, take on landscape and sky.The other pieces in the front room, including those by Ms. Hausman and Mr. Torres, also use direct references to clouds. In “Tempest in a Teacup,” Ms. Hausman places a tiny cardboard house on a mound of moss emerging from a teacup anchored to its saucer with a shiny layer of resin, with a cotton cloud hanging directly overhead. “Barco e Nuvola,” one of Mr. Torres’s series of boat-themed sculptures using stacked scraps of wood, means “Boat and Cloud.” Ms. Varela’s composition of wood festooned with rope, paint, and stoneware called “Ancestors” could be a cloud catcher, or the three stoneware cuffs she has placed around the rope’s loops could stand in for clouds themselves. The abstracted work, such as Mr. Perry’s four-paneled oil on canvas called “Abstracts,” Mr. Giehl’s “Blue Winter,” Ms. Vivace’s “Sentinel Ridge,” Ms. Goleas’s “Black Treble II,” Ms. Bateman’s pastels “Turning I and II,” and Daniel Cabrera’s untitled oil painting, all relate to some kind of cloud or similar metaphorical theme.The exhibition is decidedly mixed media, but the number of monoprints is worth noting. Ms. Obrock’s geometric approach to a skyline, Ms. Fulmer’s “Thunderhead” storm, and Mr. Bluedorn’s own “Solitary Cloud” are small in format but each make a strong impression.Unusual materials or a less rigid interpretation of the theme are highlights of the work of Mr. Cole and his gun formed of wood scraps and speaker bunting. Ms. Charneco’s “Epic Tale of an Idea” uses her signature nails, resin, enamel, and toy pieces. Ms. Friedrich’s piece is constructed of stitched felt, fabric, and paper. Finally, Ms. Dandelion’s fanciful illustration and Mr. Hamada’s “B19-03” print may pose a challenge for the literal minded. Yet, somehow it all works.The exhibition hours are Thursday through Sunday, 1 to 5 p.m.