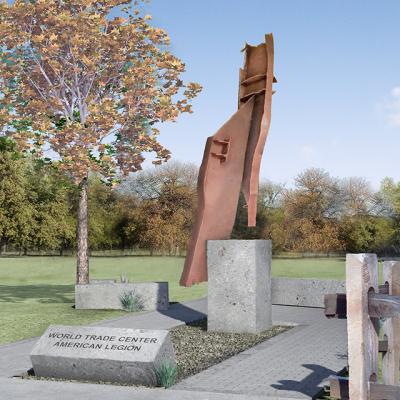 The sculptor Gustavo Bonevardi’s rendering of a 9/11 memorial that is to be erected at the American Legion in Amagansett.
Gustavo Bonevardi
‘East Hampton will have a place to reflect, remember’
By
Johnette Howard

The effort that Tony and Bob Ganga have led for the Sons of the American Legion Squadron 419 in Amagansett to construct a 9/11 memorial has been a six-year process filled with highs and low and plenty of red tape. But what continues to power the project is the legion members themselves, the generosity of the local community, and — just when things seemed stalled again — a chance meeting with a notable sculptor that still seems too serendipitous to believe.

Now, the memorial project needs a bit more financial help for completion, said Tony Ganga, but at least everyone can clearly see the finish line from here.

“Our budget is $32,000 and we need about $8,000 more to finish,” Mr. Ganga said last week, a few days after the Stephen Talkhouse held a Dec. 22 benefit for the memorial. “A lot of people have donated goods and labor. If we had the rest of the money we would have the memorial built. Everything else is done. It’s the remaining money that’s the tough part now.”

It took three years for the Port Authority of New York and New Jersey to grant the Sons of the American Legion’s application for a piece of the Twin Towers from its store of salvaged debris. In 2015, the squadron was finally awarded Artifact No. 1042 — a 1,000 pound, 14-foot-long steel beam that twisted under the weight and heat of the towers’ collapse — and the members made sure its pickup and arrival was treated with proper dignity.

Tom Milne, a retired New York Fire Department lieutenant and owner of the Surfside Inn in Montauk, Jim Grimes of Fort Pond Native Plants, and Tom Snow, one of Mr. Grimes’s employees, left Montauk at 5 a.m. and drove through a heavy storm to a hangar at Kennedy Airport to pick up the beam on a flatbed truck, then navigated the many road closings they encountered on the journey back.

They were met in Manorville by an honor guard of two East Hampton Village policemen, the Ganga brothers, and members of the Legion Riders and Red Knights motorcycle clubs. In Wainscott they were joined by an escort of two East Hampton Town police cruisers as well. Upon arrival at the Amagansett American Legion post at 15 Montauk Highway, a ceremony was held in which the Most Rev. Steven Howarth, then of the Amagansett Presbyterian Church, gave a blessing and a bagpiper provided poignant music.

“I’ll remember that day the rest of my life,” Mr. Ganga said.

To finish the project, the Sons of the American Legion is still seeking donations. It is also selling 4-by-8-inch commemorative bricks for a minimum $100 contribution apiece that can be engraved with a three-line message. The bricks will pave the walkway and surrounding areas near the memorial. They’re available at thatsmybrick.com.

After the first designer of the memorial died, the project fell into uncertainty again until Mr. Ganga’s brother, who was then working for Ted’s Taxi, picked up a fare and began talking to the man.

The passenger turned out to be Gustavo Bonevardi, who owns a house in East Hampton and was among the artists who came up with the epic public art installation “Tribute in Light,” the twin beams of light that were first projected into the sky near the site of the World Trade Center towers six months after Sept. 11, 2001, and on every anniversary of the attacks since.

The “Tribute in Light” website says the installation is meant to honor those killed that day and celebrate “the unbreakable spirit of New York.”

Mr. Bonevardi’s design for the far more intimate Amagansett memorial, which will be surrounded by a viewing area and benches, features two staggered sections of the beam that are tilted vertically and connected. It looks as if the bottom piece, which is embedded in a concrete base, is reaching up to catch or prevent the other from freefall.

Mr. Bonevardi has said the design is meant to honor those who perished, survived, or served at the site and to symbolize the human instinct to reach out and help one another.

Once completed, Mr. Ganga says, the memorial will sit on the American Legion post’s grounds, and “residents and visitors of East Hampton will have a place within our town to reflect and remember.”

Mr. Ganga, who is also a member of the East Hampton Fire Department and an organizer of the Hamptons Soldier Ride to benefit the Wounded Warrior Project, has served as the Amagansett Sons of the American Legion commander for 16 of the 30 years he’s been a member. His brother was a past local commander, and county and state officer in the Sons of the American Legion, which is for sons and grandsons of American Legion members. Tony says the two of them trace their devotion to public service to their father Antonio Ganga Jr., an Army first lieutenant who served in the Korean War and died in 2017.

“He taught us to volunteer,” Tony said.

Finishing the 9/11 memorial will be a testament to that ethos, too.