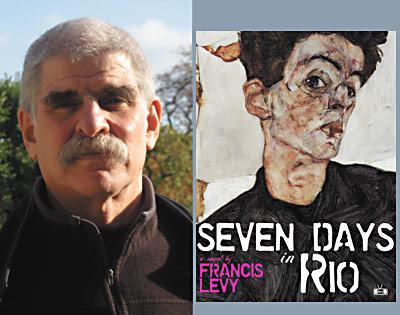 Caution: This review is probably not for the sexually faint of heart. “Seven Days in Rio,” the second novel by Francis Levy, is the story of Kenny Cantor, a C.P.A. from New York City who has come to Rio de Janeiro as a sex tourist and has one week to fulfill his sexual fantasies. Without hesitation, equivocation, or doubt, I can state that a more sex-obsessed narrator I have never encountered. There is certainly not a page, and probably not a full paragraph, in the entire novel that does not concern itself with sex.

In stark contrast with his down-and-dirty sexual fixation, Kenny as narrator is extremely erudite and articulate, discussing literature, philosophy, anthropology, and psychoanalysis with everyone he meets and tossing out terms like stichomythic and prolepsis. Despite his evident and profound intellect, Kenny narrates the book in a kind of informative but absurdist deadpan voice that lacks emotion and demonstrates a fairly complete lack of understanding of, or empathy for, anyone, but especially women.

Though it is never stated, Kenny seems to be somewhere on the Asperger end of autism spectrum disorders, wherein people are prone to difficulties in their social interactions and to highly restricted and repetitive patterns of behavior and interests and activities. On his first night in Rio, he approaches the first sexy woman he sees on the Copacabana. She is wearing high heels and a bikini.

I have always found communication between myself and other human beings to be a problem, and often worry that I haven’t succeeded with women where I otherwise might because my words get caught between my teeth. . . . “I’m Kenny,” I said. “Do you understand anglais? I am new to your country and I wanted to introduce myself while also initiating myself into your highly permissive sexual culture. I will put my cards on the table: I’d be glad to engage you to perform sexual acts on me for a fee.”

I don’t speak a word of Portuguese, so for a moment I entertained the idea of simply squeezing her breasts and spanking her very ample and exposed buttocks.

Luckily for all involved he doesn’t do that, and the woman merely walks away. Kenny has a pet name for prostitutes, Tiffany, which he uses as both proper noun and noun. He asks Victor, the concierge at his hotel, to help him find a suitable sex partner and soon a whore is sent up to his room. She is beautiful but, like a New York City cab driver, “chattering on her cell phone even as she lifted her skirt to show me her goods, whispering that she wanted the equivalent of $100. It felt so much like being in a New York cab that I accidentally blurted out ‘Forty-third and Fifth!’ instead of telling her to dance a sexy merengue in the nude.”

Kenny objects to this Tiffany’s being on the phone and dismisses her. But lest there be any doubt as to his aims and desires, later he is in the elevator and a very sexy woman (“author of several sexually charged memoirs about her life in art”) makes a pass at him. “I felt embarrassed to say no, but I suddenly realized I had come to Brazil for the prostitution, not to have free sex with a French intellectual.” Nevertheless, many of the prostitutes he meets are quite sophisticated; they read and discuss Marcuse or Sontag or Derida. One transgender Tiffany has a Ph.D. in anthropology from Stanford.

In addition to his dedication to prostitutes and prostitution, Kenny has only one other interest in life. “My interest in psychoanalysis dated from my days as a Scout. I wanted to be an analyst the way some kids want to be rock stars . . . after I became an accountant, I toyed with the idea of being a lay analyst, that is, someone who practices without an MD degree. I was young, and it seemed like a great way to get laid.”

As it happens, there is an international convention of psychoanalysts meeting at Kenny’s hotel. He encounters an Asian psychoanalyst whom he mistakes for a Tiffany (something Kenny does with nearly every woman he encounters). Her name is Dr. Dentata. China Dentata. Now interlaced with his rhapsodies concerning the pulchritude of Brazilian whores, Kenny throws in little bits of psychoanalytic theory and history.

“I returned to the lobby to look for Victor the concierge. He hadn’t been much help, but it has always been my philosophy that it’s good to do the same thing again and again even if it fails to produce results. I remember my analyst telling me that there are people who in fact unconsciously want to bring about the outcomes they so often complain about. There is even a word for it in the psychoanalytic literature: parapraxis.”

Kenny walks around for the first third of the novel without his pants, following the baton of his lust from one Tiffany to another, and the remainder of the book wearing a pair of pants tailored so tight that one can tell at a glance whether he has been, ah, circumcised.

Kenny spends the book in pursuit of the perfect whore bar in which to find the perfect whore upon whom to consummate his desires. He goes to bars like the Gringo, the Catwalk, and Uva (the interior of which “was designed to look like the inside of a uterus”), where one extremely attractive sex worker nearly gives him a case of “tardive dyskinesia, or uncontrollable licking of the lips.”

But, interestingly, Kenny does not manage to consummate his desires. Perhaps it is a case of, as Voltaire so flawlessly put it: “The perfect is the enemy of the good.” Though he meets several gorgeous and available Tiffanys, for one reason or another he never concludes the act. “Was this the mental health I’d been searching for all these years with prostitutes and analysts — a state of heightened desire whose consummation ultimately eluded me?”

Kenny does hook up with the desirable China Dentata, who conducts with him an entire Lacanian analysis in a series of one-minute sessions. (Jacques Lacan was famous for introducing the idea of “variable-length sessions” of a few or even a single minute, though methinks he did not ever intend anyone to “undergo the equivalent of 19 years of analysis in roughly four days.”) China conducts this unorthodox analysis while watching soccer on television and exposing her crotch to Kenny. Eventually she has sex with him.

“Seven Days in Rio” is a learned, at times very funny, and fascinating novel. I must confess though that I found the idea that every female character in the book was either a prostitute or just sexually available to Kenny tiresomely sexist. At one point, Kenny, in one of his many moments of self-analysis, tells us that “my intellectuality is a defense that I often use to avoid confronting my issues.” Perhaps the intellectuality of the book itself, though often intriguing and impressive, combined with the relentless sexist sexuality, keeps this novel from being as emotionally engaging as it might otherwise have been.

Francis Levy is the author of the novel “Erotomania: A Romance.” He lives in Manhattan and Wainscott.

Michael Z. Jody is a psychoanalyst and couples counselor in Amagansett and New York City.