‘Letter of Resignation’ by Francis Levy 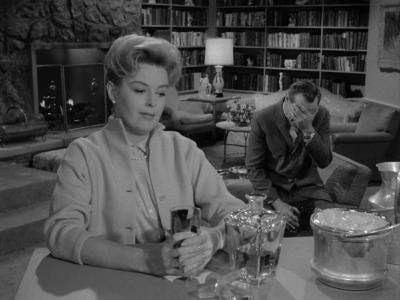 Patricia Donahue and James Daly in a scene from “A Stop at Willoughby,” a 1960 “Twilight Zone” episode about the pressures of workplace harassment.

I am sending a letter of resignation to Minnesota Public Radio, the three major networks, CNN, The New Yorker, The New York Times, and The Washington Post in anticipation of allegations that I might harass someone if I were hired to become part of their staffs. Harassment is viral and I am no longer certain my autonomic nervous system can be relied on in situations where there are other bodies in an enclosed space. After all, it’s by definition autonomic, right? It’s easy to forget that man’s an animal as well as a conscious being.

People who are suffering from illnesses that make them particularly vulnerable to infection have to be quarantined in germ-free rooms in which they run no risk of contamination. That’s what is slowly happening in America today. The only ways to avoid allegations of harassment are quarantine or recusal. Who knows if the next handshake or attempt to help someone who has tripped will result in a firing?

Doesn’t anyone remember the House Un-American Activities Committee, the blacklist, and the tarring and featherings that are an ignominious part of our history? The alacrity with which whole careers and lifetimes are disposed of without even a semblance of due process and the self-righteous outcries for revenge all reek of the lynch mob style of justice. Why is no one speaking up?

When you read that “The Best of A Prairie Home Companion” will no longer be rerun and that the version of the show hosted by Chris Thile will appear under a new name, and that “The Writer’s Almanac” will no longer be distributed by American Public Media, it recalls the Nazi book burnings. (“Garrison Keillor Accused of ‘Inappropriate Behavior,’ Minnesota Public Radio Says,” NPR, Nov. 29.) Garrison Keillor touched a woman’s back. What about more severe offenses?

Does this mean we will no longer be able to read or see work by thieves like Jean Genet, sex offenders like Roman Polanski, or bigots like Ezra Pound and T.S. Eliot? “Israel Horovitz Plays Canceled After Sexual Misconduct Accusations” read a Dec. 1 headline in the arts section of The Times.

There was the Counter-Reformation in Europe, which was basically a reaction to Luther. The question is will there be an equivalent movement here in response to the sexual revolution of the 1960s? The issue with the current spate of harassment charges against prominent figures in politics and the media is not sex but power in the workplace. Remember that iconic office harassment scene in a 1960 episode of “The Twilight Zone” called “A Stop at Willoughby,” about a beleaguered advertising executive whose only exit from the pressures of his life is ultimately death?

On the other hand, Hollywood casting couches notwithstanding, it’s unlikely that any of the liberties taken by the likes of Harvey Weinstein would have occurred were it not for the umbrella of liberalization that took place in the ’60s. In fact, almost all of those accused are onetime love children who were products of the ’60s counterculture, with the exception of Roy Moore, that is. And even back in the heyday of love-ins, the philosopher Herbert Marcuse coined the term “repressive desublimation,” which anticipated the notion of sexual addiction in pointing to the soporific, drug-like effects of the culture of hedonism.

However, with statutes like “affirmative consent” in states like New York and California, it appears that those who wish to express their sexual desires have to run a gauntlet of new laws. These statutes play into an undercurrent of puritanism in American culture that makes novels like Hawthorne’s “The Scarlet Letter” more pertinent today than ever.

Francis Levy, a Wainscott resident, is the author of the comic novels “Erotomania: A Romance” and “Seven Days in Rio.” His “Tombstone: Not a Western” will be released in April. He blogs at TheScreamingPope.com and on HuffPost.