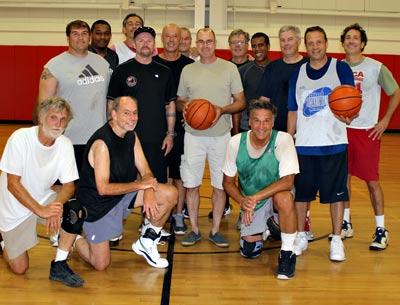 Richard Hand, center, stopped by the Pierson middle school gym on Sunday to thank fellow basketball players who had resuscitated him when he was in cardiac arrest just a week earlier.
Taylor K. Vecsey
For three of the heart attack victim’s rescuers it was a case of déja vu
By
Taylor K. Vecsey

Pierson Middle-High School in Sag Harbor has an impressive record of students and staff trained in cardiopulmonary resuscitation who have gone on to save others, but when a man went into cardiac arrest while playing basketball on a Sunday morning nearly two weeks ago and was resuscitated, it marked the first save on school grounds.

Richard Hand, a 52-year-old Sag Harbor resident, had been hitting 3-pointers all morning and was at the end of the fourth game, going in for a rebound under the basket, when he suddenly collapsed.

Rick Weissman of East Hampton was guarding him when he dropped to the floor. “I thought he ran into somebody and fell and hit his head,” Mr. Weissman said.

Woody Kneeland, a Pierson coach who was playing that morning, and Mark Tuthill, who was watching from the sidelines, reported seeing Mr. Hand’s whole body go limp before he hit the floor. “It was like 100 degrees in the gym — it could have been a million things. When he went into convulsions, I knew it was serious,” Mr. Kneeland said.

Claude Beudert, an East Hampton High School teacher who has known Mr. Hand for 25 years, called 911 at 10:06 a.m., initially telling dispatchers they needed the ambulance for a head injury from a fall.

Other players, including Charlie Bateman, a former advanced emergency medical technician with the Sag Harbor Volunteer Ambulance Corps, and Dr. Alan Katz, an East Hampton dentist, rushed to Mr. Hand’s side. His heart rate was erratic, and he was fighting for breaths, Dr. Katz said.

Mr. Bateman and Dr. Katz started CPR at a ratio of 30 compressions to 2 rescue breaths. Mr. Kneeland, who had been recertified in CPR just three weeks earlier, and Mr. Tuthill, a personal trainer who knows CPR, helped keep his airway open and later performed compressions as the rescuers traded positions, as recommended under American Heart Association guidelines. Mr. Beudert found an automated external defibrillator at the entrance to the gym.

“I’m looking down his body from his head to his feet and I just thought this was it — this man is going to die,” Mr. Tuthill said.

The rescuers ripped off Mr. Hand’s shirt, wiped the sweat from his chest, and placed the defibrillator’s pads in position. The portable electronic machine reads the heart’s rhythms and will indicate that a shock is needed to establish a life-sustaining beat only for patients with two types of life-threatening cardiac arrhythmias. Mr. Hand was in ventricular fibrillation, an abnormal rhythm where the heart cannot pump blood, and the shock was delivered within 24 seconds after the device had been turned on, according to a report the A.E.D. issued afterward.

“All of a sudden, it looked like he had some life in him again,” Mr. Kneeland said.

Mr. Weissman, who does not have CPR training and recalled standing off to the side praying, suddenly had a hunch that the ambulance probably thought they were in the high school gym, instead of the middle school gym. He ran outside to Division Street and dialed 911 to redirect them.

When the ambulance arrived at 10:11 a.m., Mr. Hand was already coming to. As Mr. Weissman re-entered the gym with the emergency medical tech­nicians, he was shocked to see Mr. Hand’s chest and stomach moving up and down very rapidly. “He was breathing. I ­couldn’t believe it — I was amazed.”

The Sag Harbor ambulance corps sent an electrocardiogram of Mr. Hand’s heart to Suffolk County Medical Control at Stony Brook University Hospital, and a decision was made to airlift him to Stony Brook, which has a catheterization laboratory. By the time the medevac helicopter landed at the ball field next to the Bridgehampton Fire Department, Mr. Hand was fully alert.

Eddie Downes, the president of the ambulance corps, said Mr. Hand is lucky to be alive. “It all came together like it was supposed to,” he said, emphasizing the importance of early compressions and a quick administration of a defibrillator.

One week later, Mr. Hand was back in the gym, not lacing up his sneakers, but to thank those who saved his life.

“Without the defibrillator, I wouldn’t be here,” he said, adding that the doctors told him, “ ‘You’re lucky those guys knew what they were doing.’ I was out for six or seven minutes — that’s kind of the limit before you lose brain function.”

He doesn’t remember much of what happened. “I just remember we were playing well; it was a tied score. I was just playing and I got a little bit dizzy.” The next thing he could remember, he was being wheeled out of the gym on the stretcher.

Mr. Hand said he hadn’t had heart problems before. He was told the cardiac arrest was caused by a problem with electrical impulses, and an implantable cardioverter defibrillator was placed in his chest. Doctors also found a blockage and inserted two stents. Despite all that, he was back home on Tuesday, and he expects to be back on the basketball court in six weeks.

For some of the players it was an eerily familiar situation.

Eleven years ago, Mr. Bateman, Mr. Beudert, and Dr. Katz were playing basketball one Thursday evening at the East Hampton Middle School when Dexter Grady, a 36-year-old night custodian who joined a game during his break, dropped to the floor. They started life-saving measures, including the use of an A.E.D. that had been put in the school only four months earlier, just after it had become a New York State mandate. Mr. Grady was resuscitated and is still working at the school today.

“This was like déja vu,” said Mr. Bateman, who went on to become an E.M.T. after Mr. Grady was revived.

Dr. Katz said he and Mr. Bateman were “lucky twice . . . Charlie and I would be the first to admit it — lots of times CPR does not bring anybody back.”

Susan Denis, the health teacher at Pierson who is in charge of training all 7th and 10th-grade students in the American Heart Association’s Heartsave CPR A.E.D. course, taught the recertification class for coaches, including Mr. Kneeland, and he was among about 30 others she has taught who have gone on to save lives. This save was yet another example, she said, of why it is so important to learn the lifesaving skill and why more automated external defibrillators should be in public places.

“If we can shock you within the first minute, we’ve got a 90 to 95-percent chance of bringing you back. But by 10 minutes, there’s less than a 5-percent chance,” she said.

“The defibrillator is just a wonderful tool. Even if you’re panicking, you’ll know how to use it,” said Mr. Beudert, who learned CPR and how to use the A.E.D. through the East Hampton School District, where he coaches golf and tennis.

The whole incident is already inspiring people to be prepared. Mr. Weissman said he wants to learn CPR now, and is even considering taking an emergency medical technician course. Meanwhile, Mr. Tuthill, who said he had never followed through with an idea to buy an A.E.D. for his Martial Arts Center in East Hampton, went home that very night and placed an order online for a model that cost $1,500.

Mr. Hand, too, said he is going to learn CPR. He also hopes to spread the word that having “a defibrillator in public places is incredibly important, because I wouldn’t be here without one.”