The Gems of Napeague 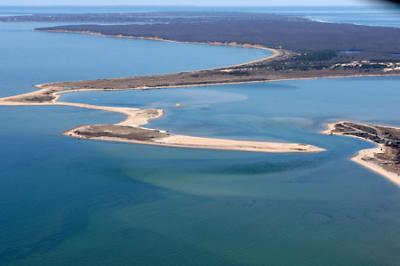 Trees don’t stand a chance on Napeague, except for the pitch pines in little hollows, as the winds sweeping across from south to north in the summer and vice versa in the winter keep any from getting a toehold.
By
Larry Penny

Napeague Harbor is the only tidal embayment tributary to the Peconic Estuary with an inlet on the South Fork that has never had any part of its surface waters closed to shellfishing because of bacterial pollution. And unlike all the others, it has two inlets, not one.

One of the first accurate maps of the Peconics, charted by a British cutter in 1787, gives a clue to the evolution of the harbor in the ensuing 323 years. It started out with one very expansive opening to the northwest. It was more an open bay than a harbor with an inlet. By the time the United States Coast Survey maps for the Peconics were drafted in 1838, there were two inlets, an eastern and a western one, both emptying into Napeague Bay, which was is juxtaposed between Gardiner’s Bay on the west and Block Island Sound on the east.

Jump to the 1940s and the west inlet has disappeared. Hicks Island is no longer an island but a tombolo peninsula and is residence to a thriving menhaden rendering factory owned by the Smith Meal Company which produced fish meal and fish oils. An aerial black-and-white photograph circa 1960 taken by the federal government shows a newly opened west inlet: Napeague Harbor was back to being served by two inlets. By 1838 the east inlet had become the larger of the two and in the post-1950 federal navigational charts of the Peconic Estuary, it is shown as the main navigation channel in and out of Napeague Bay.

If we jump back more than 3,000 years ago, we might find that there was no Napeague Harbor, just a shallow waterway between the Peconics and the Atlantic Ocean. Sediments washing westerly along the north and south sides of Montauk and easterly from the Amagansett bluffs turned the waterway into a giant marsh. The cranberry bogs that still dot the Napeague peninsula here and there are testimony to that early marsh and bog stage, when iron-precipitating bacteria took the iron out of the water and created a layer of it — called bog iron — that stretched from the Walking Dunes in western Hither Hills to the Amagansett mainland.

Sea level rose several feet in the ensuing 3,000 years (and is still rising). The wetlands were inundated, and Napeague Harbor was born. The scooping out of the harbor was not only abetted by rising seas, but also by northwesterly winds that swept the sand from its bottom and deposited it in the Walking Dunes at the harbor’s eastern edge. Sand is still being removed to the east and the underlying iron-rich sediments are being constantly exposed. When you look at a color aerial photograph of Napeague Harbor taken during the late 20th century and in this century, you see how red the waters appear. The redness is attributed not so much to the overlying water but to the bottom, which is owned by the East Hampton Town Trustees.

Remnants of a long-defunct fish meal factory can be found on the eastern shore north of the end of Napeague Harbor Road. It is now largely covered by sand from newly forming dunes that in time will become a fourth walking dune lined up behind the others, all of them creeping in a southerly direction. South of Napeague Harbor, dune sand covered what used to be the south end of an ancient waterway, creating the Napeague isthmus along which Montauk Highway and the Long Island Rail Road tracks make their way to Montauk.

The dune field between the ocean and the highway is forever changing as sand comes and goes. Pitch pines and some newly-introduced Japanese black pines have entered from the west and stabilized a large portion of the area, almost all of which is now included in the boundaries of Napeague State Park — former Smith Meal Company land — stretching from the ocean on the south to Cranberry Hole Road on the north. Much of the land south of the strip has been taken over by invasive species, in particular, by phragmites and Japanese black pines, but a small portion of it just west of Dolphin Drive, now referred to as South Flora, is particularly rich in native dune species and, of all things, lady’s slipper orchids. To my knowledge it is the only place in the world where lady’s slippers are found out in the open growing in dunes. Their flowers are whiter than they are pink.

The vegetation on the north side of the park where it abuts Cranberry Hole Road is just as interesting. It consists mainly of integrating patches of bearberry (known locally in some quarters as “deer-feed”), heather, and several species of lichens all covering and stabilizing a very flat dune plain. Across it runs an old railroad spur that used to serve the fish meal factory, the last of several to close its doors in the late 1950s.

The water table is only a few feet below and fresh groundwater continually wicks up to supply the bearberry and heather with enough water to keep them thriving. Trees don’t stand a chance, except for the pitch pines in little hollows, as the winds sweeping across from south to north in the summer and vice versa in the winter keep any from getting a toehold. This close-knit dune plain as far as I can tell is the only one of its kind in New York State, maybe in all of America.

Save for a few McMansions that have begun to dot the landscape at the edge of the state park north of Cranberry Hole since the early 1990s, this habitat gem has remained very much intact and if not molested by man will remain so for future centuries.