A Frothy Mélange of Fashion and Art 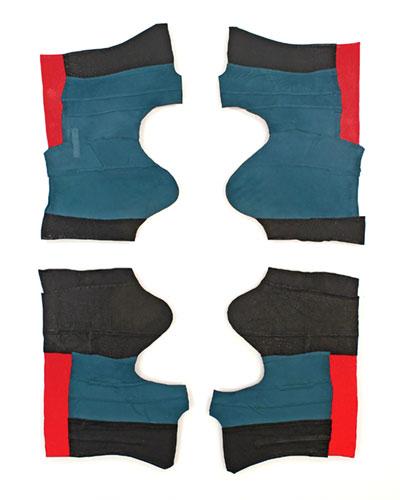 Did you give up or give away a pair of gloves, some pants, or a jacket over the past few years? Were they leather? You might find them repurposed in a colorful and unique show by Claire Watson at Ille Arts in Amagansett.

Mixing fashion and art can make for a frothy mélange, but Ms. Watson takes it a step or two further, deconstructing her found pieces so much that they become something else entirely. Up until recently she was playing with the size and shapes of opera-length gloves. Her latest work is something else: two-dimensional abstractions made from pants and jackets that are boiled, cut, and sewn into different patterns and mounted on plywood panel. Boiling tightens and shrinks the material, making it look different from what we would typically recognize as leather.

In fact, if you didn’t have a checklist of the works on view or didn’t know the artist’s background, leather would not be the first thing you would think of when you saw her pieces from afar. There are black-and-white constructions; colorful works in blue, red, and mustard; monochrome shapes that remind me of “Stargazer,” that familiar deer sculpture installed in the fields between Sunrise Highway and the L.I.E., and more.

But really, these are clever and visually sophisticated assemblages, open to any interpretation, even while Ms. Watson tamps down total free association with precise titles. The artist said part of the transformation of the found objects comes from imagined histories. This is presumably why titles such as “Some Semblance,” “The Thing Is,” “Is and Isn’t,” “Spunk,” and others are both evocative and open-ended. It’s not just her imagined histories that she alludes to, but the baggage each of us brings to the work.

She also appreciates the scars and blemishes of the animal that gave up its skin, which are evident even after the tanning and dying processes. And she says the stains and smells of the previous owners, hints of perfume and cigarette smoke, also inspire her.

As is often the case, these works are hard to comprehend fully when you’re not actually in the room with them. In reproductions they seem small, even when viewed in a large format. In reality, they are quite large. They can sport dimensions of four, five, six, and even eight feet.

Ms. Watson seems to enjoy negative space. Many pieces are created from smaller forms that she mounts in a way that leaves enough of a controlled expanse to assert her intentionality. Looking at them from across the room, you get the sense that that undulating form created by the borders of “Some Semblance” is just as much a part of the work as the solid forms themselves. Maybe, in a way, it’s everything, the colorful pieces left as mere window dressing.

Just as appealing are her preparatory drawings for each work. Given the deliberate nature of her compositions, as well as the planning involved in their construction, it is not surprising that much thought goes into them before she even splits her first seam or puts the pot on to boil.

Each work on view has its own mini version in gouache and collage. Maybe it is because they are expected to be artworks, but these drawings have an approachability that is magnetic. In a smaller way, the paint of the drawings expresses more in its color than the larger versions in skin. This paradox makes them captivating; they whisper in a way that causes you to hang on every word.

It is easy to get bogged down in the formal qualities of these works, but their origins as animal hide, clothing, and refuse and their transformation through basic domestic processes are highly charged aspects of their DNA. At the same time, her references to traditional housework draw attention to issues of class, gender, and labor.

Ms. Watson seems to be offering a choice in this show between experiencing one or several of these elements, or even taking the time to absorb it all, which is well worth the investment. The exhibition is on view through Monday­­.