Fishing Legend of the Year 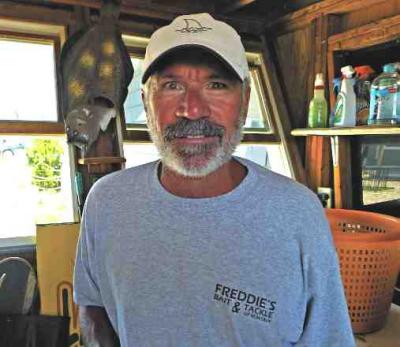 Capt. Mike Vegessi aboard the Lazybones on Monday
Janis Hewitt
A humble man of few words, the captain said he was excited and honored to have received the award, which is given each year to a local boat captain
By
Janis Hewitt

Capt. Mike Vegessi of the Lazybones party boat out of Montauk was named Fishing Legend of the Year at the Montauk Mercury Grand Slam fishing competition held on Saturday and Sunday from Uihlein’s Marina.

The Kiwanis Club of East Hampton and the Montauk Friends of Erin sponsored the tournament.

Since Captain Mike, as he’s called, and his wife, Kathy, the shoreside mate, are celebrating their 31st year in business, the honor made the anniversary even sweeter. A humble man of few words, the captain said he was excited and honored to have received the award, which is given each year to a local boat captain.

When the couple bought the boat from Capt. Bill Butler in 1985 they focused on making it a family-friendly venture. They changed the schedule from a full day of fishing to two half-day trips, one from 8 a.m. to noon and the other from 1 to 5 p.m. They called the vessel the Lazybones because unlike other fishing boats, it doesn’t leave the harbor at the crack of dawn.

It was good idea. The boat, which fishes from May through Dec. 15, is almost always full, with many repeat customers, some of whom have become lifelong friends with the Vegessis and even bunk at their house in Montauk.

For a while the boat was a true family business, with the couple’s two daughters, Rebecca Gagnon and Serena Schick, who is also a licensed captain, working as mates before they left to start their own families. Kathy Vegessi handles all phone reservations, collects the money, and throws out the lines when the boat returns to port.

Captain Mike runs a tight ship. The bright blue boat is cleaned after each trip and at the end of the day the deck and outdoor seating is scrubbed and hosed down. “It’s nice to fish from a boat that doesn’t smell like fish,” said a woman on Monday. The mates are instructed to be friendly and helpful. Some of them have grown up working the boat, starting as bucket boys.

The couple offer discounted rates for children’s groups and are always quick to donate trip tickets for local raffle prizes. For instance, on Sunday they hosted a group from Camp SoulGrow, a nonprofit children’s camp that offers activities free of charge.

The couple are so well known by customers that even when they vacation during the winter, no matter where they are, it’s inevitable that someone yells out to them, “Hey, Lazybones.”

During the award ceremony on Sunday, which was held under a tent at Uihlein’s, Captain Mike had another reason to celebrate: His mates, Joe McDonald, Mike DeMelio, and Ben McCarron, won the top Grand Slam prize in the recreational division while fishing from an uncle’s boat. For their effort they won a Mercury 150-horsepower motor, a trophy, and a cash prize, the amount of which had not been disclosed as of press time.