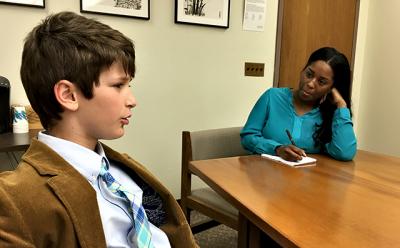 Harry Roussel of Sag Harbor, left, spoke about dyslexia with an aide to New York State Assemblywoman Catherine Nolan, who represents a district in Queens.
Helen Roussel
A push to mandate services for challenged readers
By
Christine Sampson

For his latest book report, Harry Roussel is reading “The Green Book,” a science fiction story that is a little above his fifth-grade reading level.

That is a source of pride for Harry and his mother, Helen Roussel of Sag Harbor. At one point, Harry couldn’t read well at all. He has dyslexia, which makes learning to read particularly difficult. People who are dyslexic have trouble processing letters and connecting them to their sounds, which leads to problems with reading comprehension, spelling, and vocabulary.

Harry, 10, can read proficiently now, thanks to a program called the Wilson Intensive Reading System taught by a specially trained teacher at the Sag Harbor Elementary School. But other kids are not so lucky. Not every school has teachers trained to help those with dyslexia, and it is not a separate option on a student’s individualized education program, or I.E.P., which outlines a set of specific services to help those with special needs.

Ms. Roussel and her son are trying to change that. As members of Dyslexia on Long Island, which is part of a larger organization called Decoding Dyslexia New York, they recently made a trip to Albany to lobby state legislators to enact laws that would boost support for dyslexic students in public schools. One bill, currently making its way through the education committees of both the New York State Assembly and Senate, would add dyslexia as a category on the I.E.P. and require schools to train teachers in programs designed to help dyslexic children. A second bill would require early screening and support services for children who show dyslexia risk factors.

State Assemblyman Fred W. Thiele Jr. signed on as a co-sponsor of the bills several weeks ago after hearing from many East End residents, particularly those in Sag Harbor. On Tuesday, he predicted the bills would “see some action” before the end of the current legislative session in June, but said one issue holding them back is funding. Many schools, he said, may not have the money to finance these initiatives on their own.

“I think they are important pieces of legislation as far as having teachers trained and providing early detection,” he said. “My preference would be to see the money come from New York and not see it come from the local school districts.”

In Albany, Harry met four other students with dyslexia, and the experience gave him the confidence to speak up, along with his mother, about this issue.

“We were trying to say we need to improve the education system for dyslexic children and challenged readers,” Harry said Monday. “It is hard to ask for help. It embarrasses you, sort of. We have to make it so you don’t have to ask for help. We’ll already have these programs.”

According to the Yale Center for Dyslexia and Creativity, 20 percent of people are dyslexic. Many who fall behind in reading by the fourth grade never catch up. Dyslexia is linked to problems with self-esteem and discipline, as children who are falling behind often start to think of themselves as stupid and start to act out. Other academic, social, and, sometimes, legal issues may follow. The National Institute of Health reports 85 percent of all juveniles in the court system are “functionally illiterate,” and three out of four people on welfare cannot read effectively.

“When I was younger, I was kind of lost. I didn’t really know what to think of myself,” Harry said. “It made me feel like I was the odd one out. Now, I feel like I’m not the different one.”

A disturbing trend, Ms. Roussel said, is the treatment of dyslexia as a behavioral disorder similar to attention deficit disorder. Drugs, such as Ritalin, are then given to dyslexic children because their problems learning to read are blamed on an inability to focus in school. Ritalin “will not help them to read. Children with dyslexia or children who read below grade level need a reading program and trained teachers,” not medication, Ms. Roussel said. Citing the Centers for Disease Control and Prevention, she added, “There have been no long-term studies of the use of psychotropic medication on children and how it affects their emotional development.”

She points to evidence-based tools such as Wilson and the Orton-Gillingham approach as proven methods. Additionally, she said, “The programs that have long proven to help children with dyslexia to read will also help all general education children.”

The problem is that the training and materials cost money. In a time when most districts are cutting spending, even a few thousand dollars may be too much to spare. In Sag Harbor’s 2016-17 budget, school officials reserved $3,000 for Wilson training. Ms. Roussel said so many parents elsewhere have found it hard to get support that there is enough demand for a private school. West of here, the Whole Child Academy will open later this year in Oakdale to educate children with dyslexia and other special needs.

Last year, she started a Facebook page, East End Network for Dyslexia, and she will be involved in launching a website, dyslexiaonlongislandny.com. She is relieved her son has received support from the Sag Harbor School District and his teachers, but she worries about children in other areas.

“It is through reading that students develop a social, cultural, intellectual, emotional, and spiritual awareness of themselves and the world around them,” Ms. Roussel said. “Literacy is an essential component to developing fully as a member of society. Therefore, children who do not learn to read and write to grade level are effectively disenfranchised.”