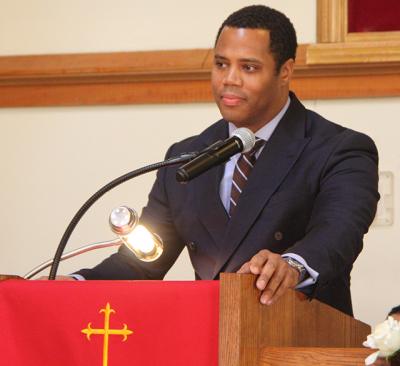 Dr. Gregory Parks, who was born and raised in East Hampton, gave a stirring keynote address at the Calvary Baptist Church service on Monday in honor of the Rev. Dr. Martin Luther King Jr.
Durell Godfrey
Speakers urged love as a transformative force
By
Joanne Pilgrim

In a stirring conclusion of a celebration at Calvary Baptist Church in East Hampton marking the birthday of the Rev. Dr. Martin King Jr. on Monday, those in the sanctuary stood hand in hand in a circle to sing “We Shall Overcome.” The keynote address was presented by Gregory Parks, an East Hampton native who is an assistant professor of law at Wake Forest University in North Carolina, and the program included a reading of Scripture, a song of praise by members of the Iglesia Cristiana Church, a poem, “Martin’s Message,” read by Regina Astor, and hymns by the church choir.

Dr. Parks, the author of 10 books as well as a host of scholarly articles, graduated from East Hampton High School, attended Howard University, and received a doctorate in clinical psychology from the University of Kentucky before earning a law degree from Cornell University.

Before launching into his talk, Dr. Parks acknowledged the many members of the audience who were hometown friends, former teachers, and family members. He noted that his father, Leon Parks, had been an East Hampton school administrator and his mother, Queen Davis-Parks, a longtime teacher at the John M. Marshall Elementary School here.

The last time he had been in Calvary Baptist Church, he said, was for his mother’s funeral — which would have given him pause had he stopped to think about it. Instead, it seemed fitting to deliver a speech inspired by his mother, originally intended for an audience at the Villanova University School of Law, which was canceled twice due to snow. “God works in mysterious ways,” he said.

In wide-ranging comments, Dr. Parks quoted writers, musicians, religious figures, and others of note, from John Coltrane to Lil’ Wayne, Elizabeth Gilbert, James Baldwin, and the Beatles, not to mention the Bible and Martin Luther King Jr. He discussed the need to counteract reflexive attitudes — racism, sexism, homophobia, Islamophobia, anti-Semitism, and so on — by the power of love.

“In this life we’re called upon not just to make a living, but to make a difference,” Dr. Parks said. Religious doctrines and texts, from the Talmud to the Koran and the Bible, promote caring for others, social welfare, and justice, he said.

“Dr. King promoted a Christian doctrine of loving not only God but one another as well,” Dr. Parks said. “It’s no surprise,” that Cornel West, a contemporary black American leader, “tells us that ‘you can’t lead the people if you don’t love the people; you can’t save the people if you don’t serve the people. . . ,’ ” he said. “I urge you to uplift our brothers and sisters in humanity. . . . We must embrace love as a verb, a transformative force.”

A nationwide problem, Dr. Parks said, is that “marginalized groups have been taught not to love who and what they are.” Majority groups, on the other hand, have at times been taught “a false sense of greatness . . . a false love.”

“Self-love is influenced by outside factors,” he said, citing a 1940s study known as “the doll test,” which surveyed children’s racial perceptions. When asked which of several dolls of different races they preferred, African-American children chose white dolls most often. The study concluded that “prejudice, discrimination, and segregation” created a feeling of inferiority and damaged the self-esteem of African-American children. Its results were used to bolster the Brown v. Board of Education decision against segregated schools.

This dynamic persists even in what’s often now described as a “post-racial” world, Dr. Parks said, adding that a lack of awareness accompanies insidious discrimination. “That’s why a white person can want to build a wall to keep immigrants out of a nation of immigrants, and honestly believe they’re not racist.”

“As a minority you must constantly find ways . . . to love who you are,” he told the audience. And, he said, members of majority groups must “reject that notion of supremacy and appreciate the beauty of those who are different.”

Dr. Parks also referred to “the tension involved in critiquing the United States.” Standing up against wrongdoing “is in its own way a sign of love for one’s country . . . a commitment to improving it,” he said. He invoked Trayvon Martin, Tamir Rice, Sandra Bland, and other African-Americans who were shot and killed by police, saying, “the list goes on.”

“In a democracy, dissent is an act of faith,” he said. “Criticism . . . is an act of patriotism.” Citizens “have an obligation to make a more perfect union” by highlighting the gaps between the Constitution and the nation’s realities. “It’s apparent that Dr. King relied on his idea of love to pursue justice for African Americans, and for disenfranchised people.”

Addressing the audience, Dr. Parks said, “May these words undergird your work as people of God, citizens of your country, as family members.”

“I can proudly say we are a multicultural Baptist church,” declared John Lewis, a church member who served as the event’s master of ceremonies.

Lucius Ware, the president of the eastern Long Island chapter of the National Association for the Advancement of Colored People, said, “Our work, as you all know, is certainly cut out for us as much or more than ever before.”

“We can’t get complacent,” Henry Haney, a church member, warned. “We all came here on different ships, but right now we’re all in the same boat.”

East Hampton Town Police Chief Michael Sarlo, whose father was an East Hampton school administrator and who was Dr. Parks’s camp counselor when he was a teenager, said he had been taught by his family and by his kindergarten teacher, Carrie Gilbert, that “people are about what’s inside of people, not what’s outside of people.” Mrs. Gilbert, who was seated in the front of the church, spoke next.

It was a “joy and a pleasure” to hear Dr. Parks, who had been one of her kindergarten students, she said. “Never underestimate children. Treat them all equally, praise them, inspire them,” she said, as the crowd applauded.