The Choral Society of the Hamptons Offered Vivid Spring Welcome 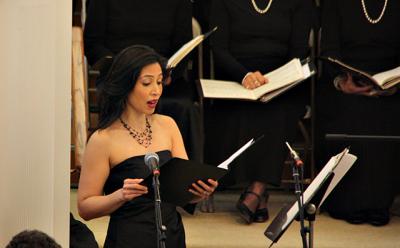 Nita Baxani, a soprano, was one of the soloists.
Durell Godfrey
By Adam Judd

On the first day of spring—the season where new life emerges from winter’s deathly clutches—the Choral Society of the Hamptons and the South Fork Chamber Ensemble drew a capacity crowd to the East Hampton Presbyterian Church for a concert of music by Johann Sebastian Bach and Gabriel Fauré pondering themes of death and resurrection.

A complete performance of Bach’s Cantata 4, “Christ lag in Todesbanden,” was the first on the program. A brief Sinfonia provided the South Fork Chamber Ensemble an opportunity to gracefully and tunefully establish the key of E minor, the tonality of each and every one of the seven movements. In one of his earliest experiments with the church cantata form, Bach fashioned six variations on Martin Luther’s hymn tune, with each one utilizing the text from a verse of the Easter hymn.

Verse one features the full ensemble, and the singers evinced a good blend of tone within each vocal section as well as excellent overall balance; the counterpoint of the first verse was very well danced! Verse two featured a beautifully sung duet by the sopranos and altos. Steve Shaughnessy, on bass, and Miho Zaitzu, on cello, played perfectly in tune with each other and with the organ, while the chorus displayed balance, clarity, and fine pronunciation of the German text. In verse three, it was the turn of the tenor section to take the spotlight. These men and women sang with beautiful tone and blend; however, the low tessitura made it difficult for the singers to project some of the phrase endings as they approached the middle of the bass clef. Verse four featured all voices, with the alto section skillfully presenting a cantus firmus melody that wove together the overall counterpoint.

Enrico Lagasca, a bass-baritone, first appeared in the fifth verse, where he delivered a convincing description of Christ as the Paschal Lamb in a rangy vocal setting that descended several times to low E; Mr. Lagasca’s voice rang out clearly even on these unusually low pitches. In verse six, the sopranos and tenors exhorted the listeners to “keep the festival,” while verse seven saw the triumphant final statement of Luther’s chorale melody as harmonized by Bach; his technique of basing an entire cantata on a single Lutheran hymn served to remind his contemporary listeners that this form of worship had its root in musically and theologically familiar ideas.

Two excerpts from Cantata 27, “Wer weiss, wie nah mir mein Ende,” were next on the program. As Fred Volkmer said in his program notes, this cantata was written more than two decades after Cantata 4, by which point Bach had heard Italian opera. Nita Baxani sang an all-too-fleeting recitative; the text expressed a wish that she “were already in heaven,” and her rendition may have offered a taste of its soundtrack. Mr. Lagasca then returned for an expressive aria bidding good night to the turmoil of the world,  “Weltgetuemmel.” This may be one of the most onomatopoeic words in the German language, and Mr. Lagasca’s enjoyment in singing it was contagious.

The Bach portion of the program concluded with “Jesus bleibet meine freude” from Cantata 147, known to many churchgoers and fans of choral music as “Jesu, Joy of Man’s Desiring.” Hearing this familiar chorale in its original language allowed the audience to appreciate it anew, especially with the chorus’s loving treatment under the Choral Society music director’s, Mark Mangini’s, direction. Christine Cadarette did a fine job accompanying on the piano, using a transcription by Dame Myra Hess. However, after all of their excellent work with the preceding Bach repertoire, it seemed a bit strange that the South Fork Chamber Ensemble sat idle during this piece.  Nevertheless, the comparatively anachronistic use of piano was meant as a reminder that Bach’s music remains a vital component of music in performance and worship today.

The Requiem text has inspired many composers, often with a bent toward vivid imagery depicting the final judgment. In contrast, Fauré’s setting embraces the perspective of a mourner looking for comfort in the face of loss. Perhaps this approach aligns more closely to the present-day approach to funerals and helps to account in part for the work’s enduring popularity. Of the several orchestrations available, the Choral Society selected the most intimate: organ accompaniment, with a brief appearance from a solo violin.

The first movement, Introitus, features the tenor section voicing the plea “Grant them eternal rest, O Lord.” The tenors sang this passage with beautiful tone and blend, but it came across as rather lacking a sense of “pleading.” It is possible that the somewhat brisk tempo in this section made expressivity a challenge. In the next movement, Offertorium, the altos and tenors pleaded quite convincingly for deliverance “from the lion’s mouth” in an opening section so minimally accompanied as to be nearly a cappella. This set the stage perfectly for the baritone, Dominic Inferrera, who sang the “Hostias” solo with earnest delicacy.

In Sanctus, the violinist Song-A Cho appeared as a soloist, providing a beautiful countermelody to the canon between the sopranos and lower voices. Ms. Cho was outstanding in her execution of a very exposed and rather demanding solo. Pie Jesu saw the welcome reappearance of the soprano, Nita Baxani. Her gorgeous yet simple tone covered a fantastic dynamic range, including a breathtaking decrescendo to pianissimo at the conclusion. There were a few passages within this movement where Ms. Baxani may have wished that the tempo were a bit more fluid to allow for savoring the ends of key phrases; nevertheless, the audience found this movement quite stirring.

The Agnus Dei movement formed the conclusion of Fauré’s original 1888 version of the Requiem, and the chorus and Mr. Mangini showed an incredible attention to dynamic contrasts throughout the “Lux Aeterna” section that echoes the first movement. The addition of the Libera Me movement to the work in 1893 embraces another important facet of the modern funeral experience: even while grieving the loss of a loved one and offering comfort to others, there remains an underlying fear of one’s own mortality. Mr. Inferrera’s interpretation in this movement was highly compelling, both vocally and facially, and he asserted his preferred tempo gently but firmly at the start. The chorus displayed sensitivity and a fantastic range of dynamic levels as they moved from “quaking and trembling” to depicting the “day of anger, calamity, and misery.” Mr. Mangini and Thomas Bohlert, at the organ, handled the meter change into compound time quite ably, allowing the drama to build without interruption. One of the most compelling moments of the entire Requiem is where the chorus takes up the Libera Me text and melody with which the baritone soloist began the movement, turning his personal plea for deliverance into a universal one. The chorus rendered this part with quiet intensity, bringing the movement to a highly satisfactory close.

The Choral Society deserves praise for bringing the music of Bach and Fauré so vividly to life in a celebration of spring, Easter, and new life in all its forms!